What's the EU (or at least German) view on the definition of currency manipulation?

The US has a statutory definition of currency manipulation; while some US economists don't quite agree with the legal definition, nevertheless the topic is fairly widely discussed in the US in technical terms (well among those who comprehend these things). For some US examples see a related question.

What I want to ask here is: what's the German or EU-level take on the topic of the technical definition of currency manipulation? This can arguably be a somewhat broad question, so I'd prefer a top-down approach: whether there are any official definitions used (e.g. in EU or government reports, especially in big countries like Germany) or just some views of well known European institutes or EU economists.

We have our remit, we have our mandate . . . defined as [targeting] a rate of inflation close but below 2 per cent over the medium term.

I just said a moment ago we are ready to use all the instruments that are necessary to fulfil this mandate and we can’t target the exchange rate.

While there is no central definition, The Economist uses an unofficial standard for judging which nation is most liable for currency manipulation as show in the following graph: 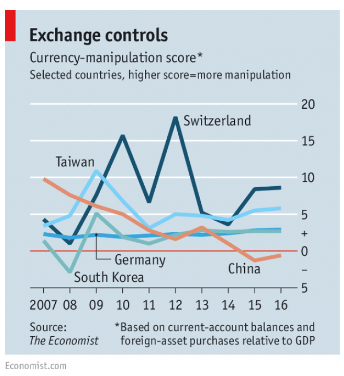 Not the answer you're looking for? Browse other questions tagged european-union economy germany currency .

11
Is there any indication that the Euro rate is being politically manipulated?

11
Has any government made the unwinding of their US bonds and currency reserves a core public policy plank or a legal requirement?
2
Why is the USA dollar the world reserve currency and what are the main consequences?
8
Why do unstable countries prefer a black market for currency to exist, rather than accepting the real exchange rate?
2
How's the German government formed?
1
Why do countries antagonistic to the USA keep US$ as their reserve currency?
40
Why does PRC devalue its currency on purpose, but Turkey is worried about the devaluation of its currency?
8
What are the possible consequences of being labelled as a currency manipulator?
2
What in EU rules prevents competitive currency devaluation (outside the Eurozone)?
24
Why is using the euro instead of a local currency such a big deal and why is the wealth of the society an argument?