Is Baltimore unfair to Republican voters?

You should see what Baltimore has done to exclude GOP voters

Question:
What, if anything, has Baltimore done to exclude Republican voters? If the exclusion involves gerrymandering please show pictures.

You'll have to ask K Dog. The question was about city elections, so all these answers about states' gerrymandering of congressional districts are irrelevant. Here is what he was responding to:

"With the aim of explaining changes in electoral rules adopted by U.S. cities, particularly in the South, we show why majorities tend to adopt 'winner-take-all' city-wide rules (at-large elections) in response to an increase in the size of the minority when the minority they are facing is relatively small."

Note, as I said, it's taking about city election rules -- and not only that, but about at-large elections, which are the opposite of gerrymandering since they don't use districts at all. However, Baltimore's city council uses districts, with an at-large council president, so it's hard for me to guess what K Dog was referring to in response to this. See http://www.baltimorecitycouncil.com/council-members

The answers about gerrymandered congressional districts can't be right, because that is done by the state government, not by Baltimore... and in Maryland politics the DC suburbs are at least as powerful as Baltimore. See, for example, https://fivethirtyeight.com/features/growth-of-suburban-d-c-is-felt-politically-in-maryland/

Also, I hope I don't actually need to explain this on a politics site in a question about US politics, but Baltimore is not the capital of Maryland, so it wouldn't be used metonymically to refer to the state government; you would use "Annapolis" for that.

Gerrymandering is the big one. Maryland is two-thirds Democrat and one-third Republican, and in the 2010 redistricting, Democrats offset several large Republican-dominated rural areas by scooping up just enough of Baltimore to have a Democrat majority, creating absolutely crazy district lines. They then packed a district with all Republicans. This had the effect of making seven of Maryland's eight representatives come out Democrat and only one Republican, rather than the two or three representatives the Republicans might have had if the districts were more compact.

The city (or county) of Baltimore is not unfair to Republican voters. It could be argued that the state of Maryland is because of how they draw the congressional lines. On that same token, in part because Maryland has gotten even bluer since 2008, the state wants to draw the lines to be an 8-0 lockout. It is possible to draw such a map and not look as "ugly".

If you have a city council in a city that is 75% plus Democrat (usually -- not always -- has to be at least 75% to be on its own, it is possible to force this with gerrymandering with at least 60% or so of the vote) and not hyper-segregated in a political and by extension likely a racial sense, it is not possible or at least easy to draw a Republican district.

Here is the precinct map of Baltimore: 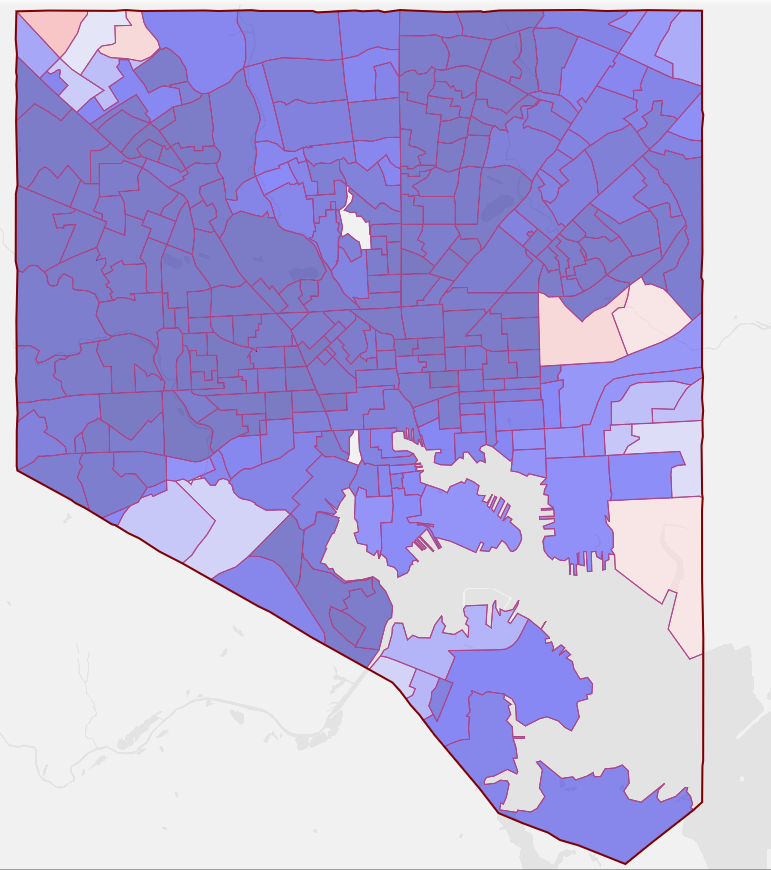 It is impossible to draw a Republican city council district in Baltimore. (In case you wonder, those precincts in light red have 10,000 people and are clustered in 2 areas on the opposite ends of the city.) You could make a similar argument that Massachusetts is unfair to Republicans because Democrats are spread out so well that it is reportedly impossible to draw a contiguous district Trump carried in 2020 even if you tried.

As you can see here, by at least one measure Maryland's gerrymandering caused them to elected one more democrat than would be expected with more fair districts. They currently have 1 Republican and 7 Democrats, so they would be expected to have 2 Republicans and 6 Democrats in the House instead.

538 did a good job of putting together an application that lets you see how gerrymandering could/does work: https://projects.fivethirtyeight.com/redistricting-maps/maryland/#Proportional

(Since 'fair' districts are a topic that not even the Supreme Court is willing to decided on, for this answer I've defined 'fair' as being 'the same proportion of Congressional representatives as votes in presidential elections')

With a voting split pretty close to 50/50, two Republican and two Democrat representatives would be decently fair. The last time it was even was in 2002, after which the 2nd district became Democrat. For the last 28 Congresses(i.e., since 1962), Baltimore county has had a Democrat/Republican split of 3/1 19 times, a 2/2 split 6 times, and a 4/0 split 3 times. For the Congresses since 2004, split has been 3/1 6 times and 4/0 once, for an average split that is definitely over-representing Democratic voters.

5
Is the US-based observation that "the larger the proportion of minorities, the more exclusionary the electoral system" generalizable?

22
How come Gerrymandering is still legal?
9
Why is the Republican majority greater in the US House of Reps than in the Senate?
14
How would one prevent political gerrymandering?
17
How do Republicans explain their lack of support among minority voters?
5
Origin of gerrymandering phrase regarding politicians picking voters
3
4th Circuit court: North Carolina laws "targeted blacks with almost surgical precision" after "they got rid of preclearance after Shelby County"?
5
What was the House Popular Vote excluding uncontested races?