Are opinion polls always representative of the extreme opinions?

Opinion polls involves a choice. The people who are being asked to take the poll can say yes or no.

I suspect that this leads to such a significant amount of self-selection bias that I am starting to think that most opinion polls are by and large misleading due to them representing the views of the extreme and not the average. Am I correct in this position?

Here's what I mean. If you, say, call up a person and ask for five minutes of their time to do a poll, most likely they'll say no thank you. Most people ... just aren't interested in doing polls, right?

So if a person actually says yes, that would suggest that this person is abnormal in the sense that they actually want to do the poll. Why would that be? Well, there are many possible reasons (lonely elderly, perhaps?), but certainly one possible reason is that this person just happens to have an extreme opinion on the topic that they are about the be polled on, and therefore has an increased interested in making that opinion known. The average person, having the average opinion, will therefore be underrepresented in such polls, while the extreme person will be eager to express their extreme opinion

For example, if I received a call today by a pollster asking for a few questions on "LGBT", I'd pass. I have no strong opinions on the topic, am not LGBT myself, nor do I hate LGBT members. It's just not relevant to my life, so I have little to say. However, if I happened to be LGBT myself, or if I happened to be somebody who strongly disliked the LGBT community, I might very well be interested in taking such a poll. Hence the poll becomes skewed and representative of more extreme opinions.

The survey/poll participants not being all equally likely to answer is a well-known problem called participation bias aka non-response bias. A typical example:

A study of nonrespondents from the National AIDS Behavioral Survey (NABS) was conducted in 1990 to attempt to identify potential differences in participants and non‐participants that may influence estimates of sexual risk behavior. [...] Results indicate that refusers are older, attend church more often, are less likely to believe in the confidentiality of surveys, and have lower sexual self disclosure.

The effect probably depends on the topic of the poll. One (highly cited) meta-analysis has among its conclusions:

The interviewer effect is related in that some people may refuse to talk to some interviewers e.g. based on the race or age of both, or just not like to talk to people in general, creating a specific non-response bias. E.g.:

An analysis of the 2004 and 2008 [US election] phone surveys and exit polls reveals differing patterns of item non-response across the two interview modes. 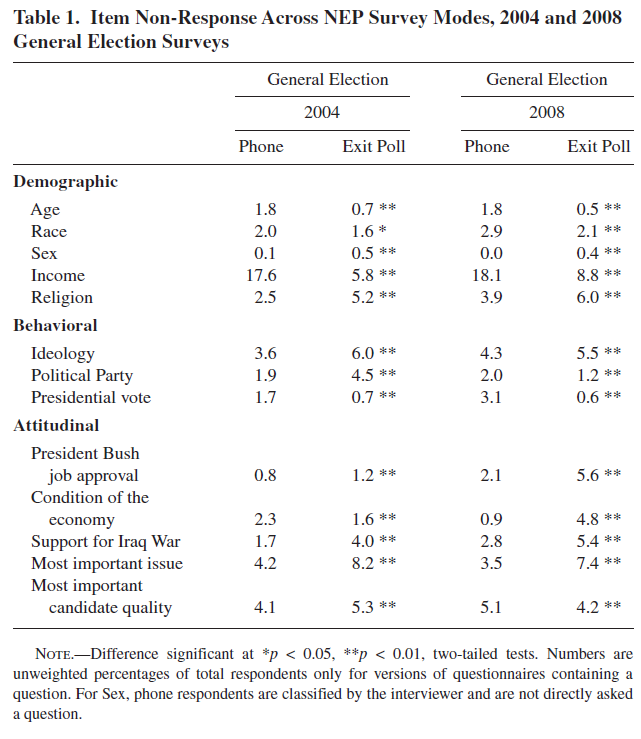 So to answer your title question "Are opinion polls always representative of the extreme opinions?" (My emphasis.) I think the answer is clearly no. The non-response bias isn't necessarily equally likely to favor both extremes (and to exclude the "middle"). Depending on the study design (topic, participants, mode of survey), it can favor one extreme, both or the "middle". In fact, detecting the pattern of the non-response bias (for a given study) is a non-trivial problem. Quoting again from the meta-analysis:

We cannot rely on full or partial canceling of nonresponse biases when we subtract one subclass mean from another. The bias of the difference is a function of differences of response rates and covariances between response propensities of the subgroups and the survey variable.

Defining an opinion poll as "an assessment of public opinion obtained by questioning a representative sample," the answer to your question is no. Opinion polls are not always overly representative of extreme opinions.

If you were to poll 20 people in your company (selected randomly) and they all respond, your poll would not be overly representative of extreme opinions, on average.

The problem arises when using voluntarily response survey methodology and is exacerbated by a low response rate. The problem of non-representative samples is not unique to opinion polls, but polls in general.

This is a known problem with polls. Along with sampling error (they accidentally picked an unrepresentative group of people to call), polls may be skewed by people refusing to participate.

Pollsters attempt to control for both effects by comparing to more reliable data. For example, if it is a political poll, they may compare the demographics of the respondents to those of the region as a whole. In particular, they often try to control for political identification, that is to say, party registration. If their poll has too many Democrats to Republicans, they may decide to call more people looking for more Republicans. But of course that has a problem too.

Most pollsters use other demographic data. They'll often ask age for example. And they may also use other questions in the poll as controls. For example, they may ask someone's opinion on Donald Trump or how the person voted in the last election (or both).

Some pollsters do reference polls with the same people every time. These give baselines for how people should answer certain questions. They or other pollsters can then do comparisons of other polls to the baseline polls to look for skew. Or compare the baseline polls to actual data. For example, if you're polling an election, the election itself can be a base line to which the polls can be compared. Since who voted is generally public information, you can compare the actual demographics to the polled demographics.

The TV series Yes Prime Minister (S01E02 "The Ministerial Broadcast") explains all about this:

Sir Humphrey Appleby: [demonstrating how public surveys can reach opposite conclusions] Mr. Woolley, are you worried about the rise in crime among teenagers?

Sir Humphrey Appleby: Do you think there is lack of discipline and vigorous training in our Comprehensive Schools?

Sir Humphrey Appleby: Do you think young people welcome some structure and leadership in their lives?

Sir Humphrey Appleby: Do they respond to a challenge?

Sir Humphrey Appleby: Might you be in favour of reintroducing National Service?

Sir Humphrey Appleby: Yes or no?

Sir Humphrey Appleby: Of course, after all you've said you can't say no to that. On the other hand, the surveys can reach opposite conclusions.

Sir Humphrey Appleby: Mr. Woolley, are you worried about the danger of war?

Sir Humphrey Appleby: Are you unhappy about the growth of armaments?

Sir Humphrey Appleby: Do you think there's a danger in giving young people guns and teaching them how to kill?

Sir Humphrey Appleby: Do you think it's wrong to force people to take arms against their will?

Sir Humphrey Appleby: Would you oppose the reintroduction of conscription?

Sir Humphrey Appleby: There you are, Bernard. The perfectly balanced sample.

More often than not opinion polls support the views, desires or prejudices of the people that funded them. This may explain to a some extent the differences between the polls and the election results for Trump-Clinton and Brexit, for example.

Not the answer you're looking for? Browse other questions tagged public-opinion .

1
Do political parties pay for opinion polls?
2
Are Opinion Polls as accurate as they once were in America?
3
Is there evidence that phone polling led to people's votes being “outed”?
1
Do any jurisdictions take steps to protect people's votes from being “outed” by the polls?
8
What caused the SPD to gain in opinion polls in early 2017?
3
Is exit-polling more accurate than pre-election polling?
82
Why do UK politicians seemingly ignore opinion polls on Brexit?
6
Are there any public opinion polls in the US on them starting military action against Iran?
5
Does trust of strangers influence how likely someone is to answer a poll from a stranger?