Can one say that US politicians are more independent from their parties than others?

On this question, a user commented:

It should be noted that the US has the weakest political parties among modern democracies - that is, US politician are way more independent from their parties than their counterparts abroad (in Europe or elsewhere). Therefore, the founding fathers did succeed in part in preventing political parties.

How would one evaluate this claim? It seems like there could be numbers out there that show how often representatives break from their parties, and whether American politicians do more frequently.

I'm assuming the commenters was discussing members of the US Congress.

Traditionally, yes, but not much anymore

One way would be to look at how often members of one party vote the same as members of another party. In this 2015 paper published on PLOS One: The Rise of Partisanship and Super-Cooperators in the U.S. House of Representatives, Andris et.al. do just this with data from 1949-2018:

We define a network of over 5 million pairs of representatives, and compare the mutual agreement rates on legislative decisions between two distinct types of pairs: those from the same party and those formed of members from different parties.

In the plot below (figure 1), the authors plot the probability that 2 representatives will vote the same way on a vote, split by whether they belong to the same party (light grey) or different parties (dark grey). As you can see, from 1949 (the first year studied) through 1981, there is substantial overlap between the 2 distributions, meaning that members of the same party often disagree at a similar rate to members of a different party.

Beginning in the 1980s, however, these peaks separate, showing that representatives are becoming more polarized and more likely to vote with their party. 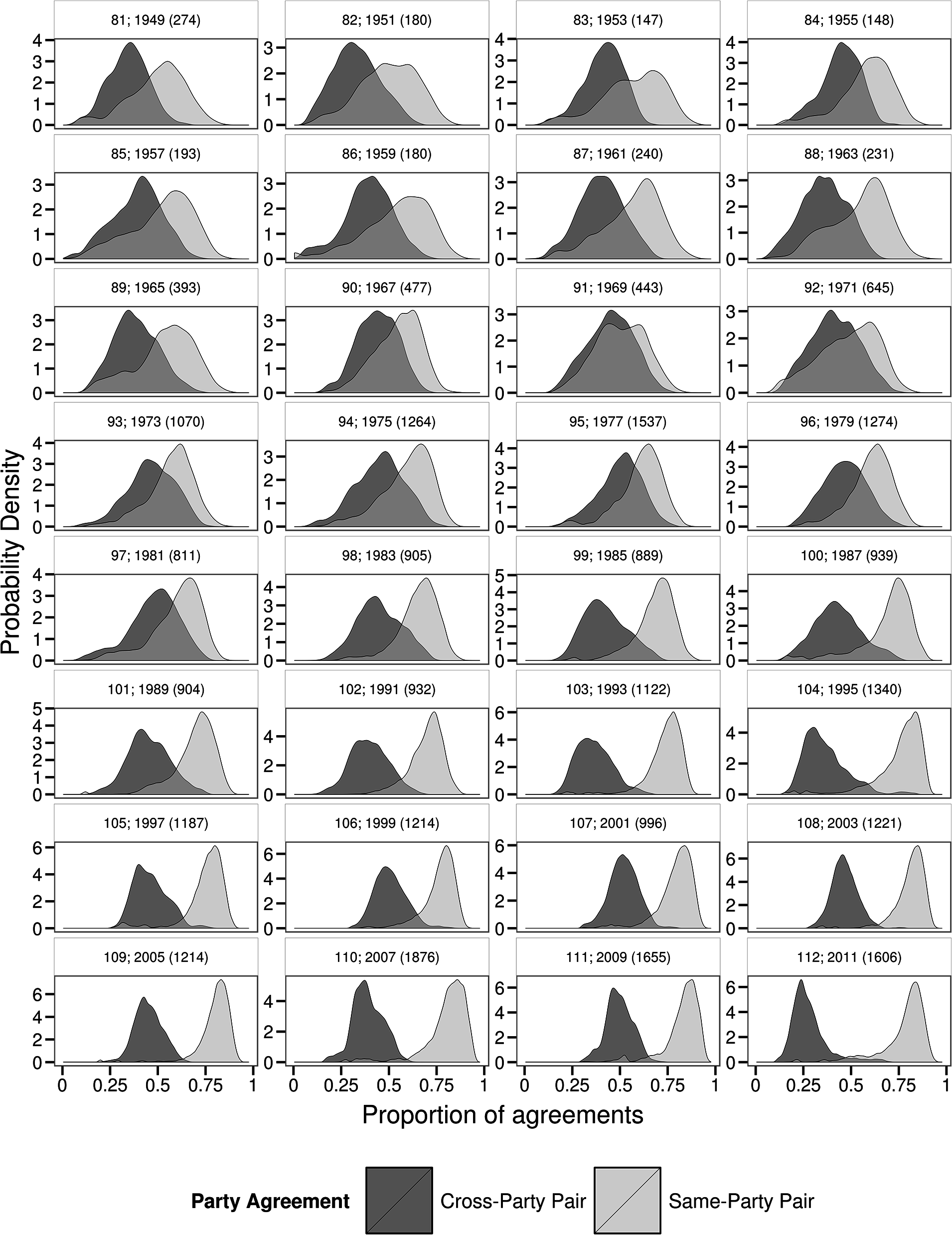 The takeaway from this is that while, traditionally, US politicians were quite willing to break with their parties and work with members of their opposition, this behavior has all but disappeared in recent decades.

Basically this is likely to be true (i.e. that US has more dissent) due to the average effect that "personalized electoral rules" (meaning not running on lists like in continental Europe) and the existence of primary elections in US. From https://www.jstor.org/stable/24886188:

I present an individual level, cross-national analysis of institutional effects on legislators' behavior. To this end, I calculated the percentage of times 6,776 legislators from 180 parties in 30 country-sessions voted against the majority of their party. Using this data, I find support for the assertion that the positive effect of personalized electoral rules on dissent levels is mitigated by centralized selections carried out by party leaders, and similarly that the tendency of democratized selection processes (e.g., primaries) to increase legislators' defection levels is moderated by a party-centered electoral environment.

Alas the paper does not contain the individual country data.

There's one 2015 paper that does make a direct US-Europe contrast, alas in somewhat hard-to-grasp terms:

Moises Ostrogorski once denounced political parties for burying diverse concerns of pluralistic societies under monolithic electoral options. E.E. Schattschneider celebrated them for the same reason: organizing choice and ‘responsible party government’ amid pluralistic complexity. Comparativists have found both dynamics in European legislatures: most European parties exhibit the high average levels of voting unity that Schattschneider’s theory implies, but also display rather Ostrogorskian cycles of discipline, stifling dissent on divisive issues at election time. We use comparativists’ tools to explore the dynamics and normative quality of party unity in the different terrain of the US Congress. We find similar cycles of unity in roll-call voting, but in the American context – with more loosely organized parties, especially historically but still today – Ostrogorskian stifling of dissent operates against a less Schattschneiderian background. In comparative perspective, Congressional parties muffle divisive issues more effectively than they deliver governance, with tenuous implications for representation.

They have some plots of cyclical party discipline in the paper, but these aren't comparative (i.e. US only.) They expand a bit more on their comparison with Europe in text:

Although Ostrogorskian fears might seem to originate from party strength, then, they may actually be most troubling where parties are weak. The comparative work that inspired our project shows similar cycles in European parties. Yet these parties presumably offer more Schattschneiderian benefits in return: very high average unity means that they retain considerable coherence even in the cycle’s troughs, so that on many issues they translate electoral unity into responsible government. When we find similar cycles in a US context with lower average unity – and especially where parties are weakest, before the 1980s and generally in the Senate – unity may be more deceptive. The lower the average unity, the more the cycles’ troughs challenge delivery of legislative majorities, and thus the more election-time peaks represent misleading promises to voters. Especially on issues with the highest prevailing levels of dissent, where our analysis finds the strongest cycles [...], parties may serve mainly to remove disruptive questions from electoral competition (as with EU issues in Europe: Parsons and Weber, 2011). When overall unity across issues is extremely low – as was long typical in the United States – parties with little capacity to deliver governance might exist largely to construct rhetorical packages and obfuscate cross-cutting concerns. Troublingly, we found the strongest cycles of dissent in parties that should, in principle, be best positioned to deliver on their promises thanks to electoral success and majority control [...]. Certainly, the record of US majority parties in enacting major campaign promises is weak – moments like Obamacare, Newt Gingrich’s Contract with America, or Johnson’s Great Society are exceptions that prove the rule – and ‘weak Ostrogorskian’ parties may thus share some of the blame typically attributed to divided government. ‘Responsible party government’ is especially difficult to deliver in the American context, but unfortunately it seems that Ostrogorskian muffling is somewhat easier to achieve.

So yes, overall they find "lower average [party] unity" in the US compared to Europe. They also confirm the US historical trend toward higher party unity since the 1980s (the topic of divibisan's answer).

They conclude US party unity has not reached European levels based on Rice index comparisons:

Recently, Congressional parties have become more unified than ever – though still not like European parties. Until the 1990s, Congressional politics were largely understood as the opposite of strong party government (Mayhew, 1974). In an institutional environment of majoritarian elections in single-member districts, combined with a separately-elected executive, classic models of legislative representation emphasized individual candidates and their constituencies (Miller and Stokes, 1963). This changed as the long North–South realignment rearranged party lines, and as reforms in the 1970s gave party leaders resources to incentivize discipline (Rohde, 1991; Stonecash, 2006). From a fragmented arena with party scores on the Rice index of voting unity below 70 in the 1950s and 1960s, unity peaked in the 110th Congress (2007–09) at 87.25 for the House of Representatives (84.85 including the Senate).

Yet American party unity remains modest by European standards. One survey of European data from the 1990s found Rice index scores that approached perfection, like mean unity across multiple parties of 99.93 in Denmark, 99.33 in France, 99.25 in the United Kingdom, and 99.06 in Belgium (Depauw and Martin, 2009: 105).

The paper also notes somewhere in its intro that

European and American literatures on legislative behavior that have remained strikingly separate.

... which is something that I discovered myself trying find any comparative papers to answer this question...

The fact that the US is huge means that politicians from the same party can have different opinions on policy based on regional issues. A Republican from California is going to have strong opinions that differ from a Republican from Texas. From a general standpoint, aside from the primary elections, there is no benefit to joining a political party in the United States unless you intend to run for elected office. Among your average Citizen, registered independent voters (as opposed to the very unnoteworthy Independent Party) are the fastest growing party affiliation in the United States and hold a 42% share of registered voters in the United States, compared to the 29% Democrat share of affiliations and the 25% Republican share (although these aren't their lowest numbers of support, they are pretty close and nadir for each was within the decade).

Most independents identify as leaning towards one party more than another, but all are dissatisfied with the party's pure platform and would rather not be attached to them. The Independent numbers do generally shrink in Presidential Election Years but return to higher numbers in the interim 4 years... though Gallop poll (Source) did note a higher than significant rise of independents between 2016 and 2017, rising from 39% to 42% (the Zenith of independent identification was in 2014, with 43% of the voter registration).

Generally, the candidate who courts the independents, not the party base, will be the one to win the election.

53
Why did political parties form in the United States?

8
What determines the identity of "the minority party" leadership if there are more than two parties?
-1
Does the USA have more than 2 political parties (Democrat, Republican)?
6
Do European Parliamentary leaders have greater standing in their own parties than American Presidential candidates?
53
Why does partisanship trump concerns about hypocrisy with voters?
4
Are there any statistics / studies to prove that Fox News is putting on more Democrats than Republicans?
47
Why does the UK have more political parties than the US?
2
Are Western parties more analogous to the LDP or its factions?
43
Why do politicians create more advertising badmouthing their opponents, rather than promoting themselves?