What is the significance of this "sanctimonious humbugs" cartoon which appeared in today's Guardian?

The Guardian is a moderate left-of-centre quality newspaper, of similar editorial policy to the New York Times, and Le Monde.

What is the significance of today's cartoon by Steve Bell? 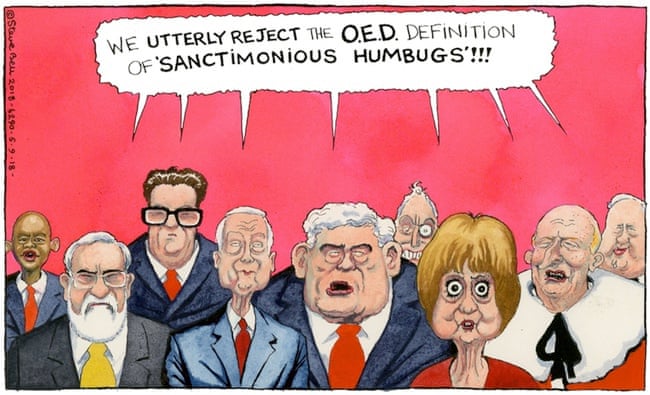 While the editorial position of the Guardian is "centre-left", Steve Bell normally takes a much more extreme left-wing position.

In the Labour party there is a split between the current leadership (Jeremy Corbyn, a left-winger) and the previous leaders (Neil Kinnock, Tony Blair, Gordon Brown) and others who identify with the centrist tendency within the party (Chuka Umunna, Tom Watson, Frank Fields, Dame Margaret Hodge and Roy Hattersley). They are symbolised by the "pink" (i.e. faded red) background.

The centrists, and the former Chief Rabbi (Jonathan Sacks), have accused the hard left of antisemitism. It appears to be Bell's point that this is "humbug" (i.e. nonsense). His point is that accusations of antisemitism are just a convenient stick with which to attack the current Labour Party leadership.

This is put into the question of whether the Labour party should accept in full the definition of antisemitism of the International Holocaust Remembrance Alliance, which includes examples such as "comparing the government of Israel to the Nazis" as examples of antisemitism. Previously the current leadership had adopted the definition, but omitted the examples. However, the party had fully adopted the IHRA definition at the time of the cartoon.

Further context from the Guardian: 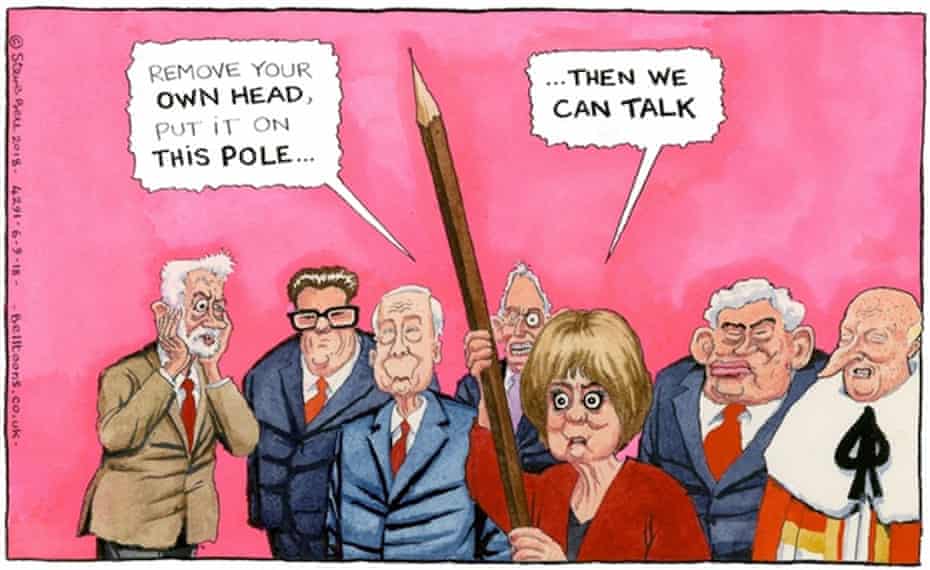 While I think the JamesK answer above is the correct one, the image here provides additional context. This is the cartoon from the day after the one in the question. It makes it more explicit that those depicted are allegedly more interested in ousting Corbyn than the Anti-semitism allegations themselves.

It is worth noting that only Labour politicians appear in this second cartoon, not the full line up from the first image.

Not the answer you're looking for? Browse other questions tagged united-kingdom media .