Nakhichevan is a part of Azerbaijan physically separated from it, but occupied by the same ethnic group, Turks. However, it is surrounded by countries hostile to Turkey. Does Azerbaijan have any overland access to the exclave of Nakhichevan? The situation is depicted on the map below: 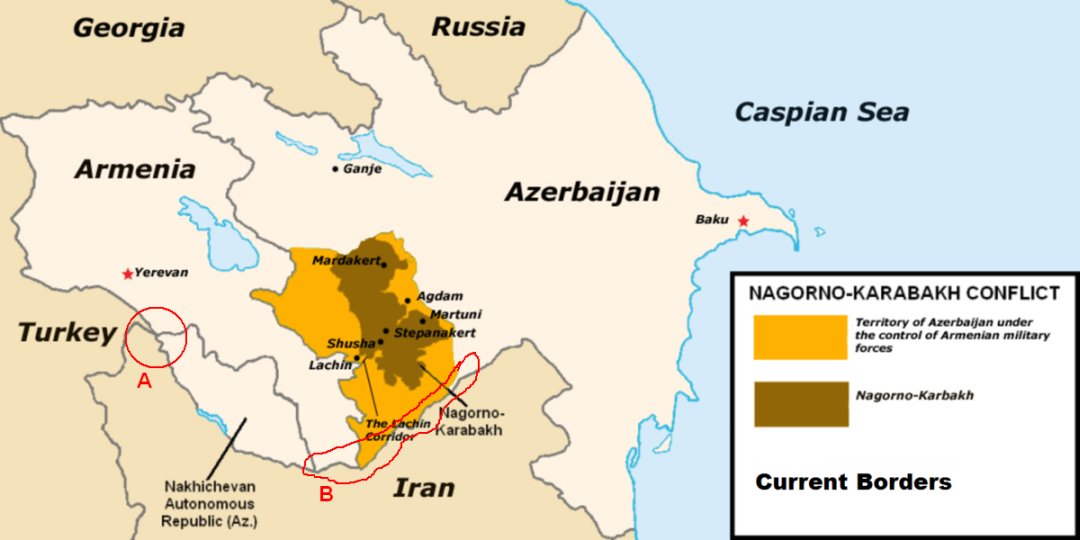 I am pretty sure that Nakhichevan has access to Turkey at the border junction marked A in the map. Satellite photography of this area shows a bridge, large Turkish terminal and militarized checkpoint at the border. On the north side of the river is a much smaller checkpoint, which I imagine is controlled by the Azeris.

However, the situation to the east is less clear. On the border along the river, marked as "B" in the diagram, there are two roads on either side. Since Armenia and Azerbaijan are enemies, I assume the northern road is closed to Azeris and other Turks. However, the political situation between Azerbaijan and Iran is more complex, and I wonder if Iran is allowing the Azeris to engage in commerce with Nakhichevan on the southern road?

An interesting additional thing is that the main crossing between Iran and Nakhichevan appears to be at Jolfa and the security checkpoints on both sides seem to have very similar architecture, as though they were built by the same people. Was there some kind of joint effort to build this crossing? 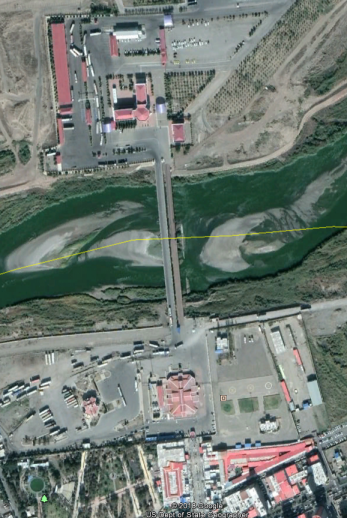 Jolfa Crossing between Iran and Nakhichevan

Azerbaijan has overland access to Nakhichevan subject to Iranian benevolence. While Nakhichevan also has a short border with the more friendly Turkey (where many of the Nakhichevanians have emigrated in post-Soviet times), Azerbajain proper does not have a border with Turkey.

According to one Western analysis:

Iran has traditionally had enormous influence in Nakhchivan, the large western exclave of Azerbaijan. Partially, this is an outcome of history—Nakhchivan’s population was more Persianized than other portions of Azerbaijan. But more recently, and perhaps more importantly, Iranian influence stemmed from the fact that it controls the only land bridge between Azerbaijan proper and that territory. Indeed, despite the cultural links between Azerbaijanis and Turks, Tehran has played a larger role there than Ankara, especially in modern times, given this link and thanks to Iran’s supply of energy resources to Nakhchivan. [...]

Iran presently provides almost all the electric power to Nakhchivan and controls much of the water supply there. If Baku took any action that Tehran did not approve of, Iran could, at least in the worst case scenario, turn off the lights and deny much of the exclave water needed for industry and human consumption. Azerbaijani forces could presumably ensure access to water from the Arax River, but they are not in a position to move into Iran to seize power stations and force them to continue to supply electricity to Nakhchivan.

Not the answer you're looking for? Browse other questions tagged iran borders azerbaijan .

6
How much power does the Iranian president have?
11
Which country made the drones Azerbaijan uses against Armenia?
7
Did any country indicate support for Armenia in the ongoing conflict with Azerbaijan? Do they have any potential allies?
2
Why is Turkey allied with Azerbaijan instead of with Armenia?
7
What has Azerbaijan said it is going to do with the Armenians in Nagorno-Karabakh?
0
What did Georgia do during the Azerbaijan-Armenian War?
9
What made Azerbaijan confident it could freely initiate the 2020 Nagorno-Karabakh conflict without the intervention of Russia?