Hypothesis: “globalization makes a ”strong“ economy the hostage of its own success?”

What do you think about the hypothesis that globalization makes a "strong" economy the hostage of its own success?

What do I mean by that?. Two countries deal with each other for a long time. One of them ("A") has very strong economy - it is very influential, has solid economic fundamentals, exports lots of goods, generates innovations, etc. The second one ("B") is struggling with some economic problems and starting to become more radical, autocratic and populistic.

Then "B" demands that "A" (and any other strong countries) must listen him as he is "too big" to collapse and keeps the region "safe" - and can generally do whatever he wants and nobody can do anything to stop it, in his goals and independence. "B" says that any "bad behavior" of "A" (and any other strong countries) may start the next global crisis (immigration increase, debt problems, military conflicts, etc.). As "A" wants to keep its economy rising and reduce any chances of problems, it seems that "B" has started to dictate the rules.

P.S. Both countries have similar sizes, GDP per capita ratio are around 4:1 (A:B). 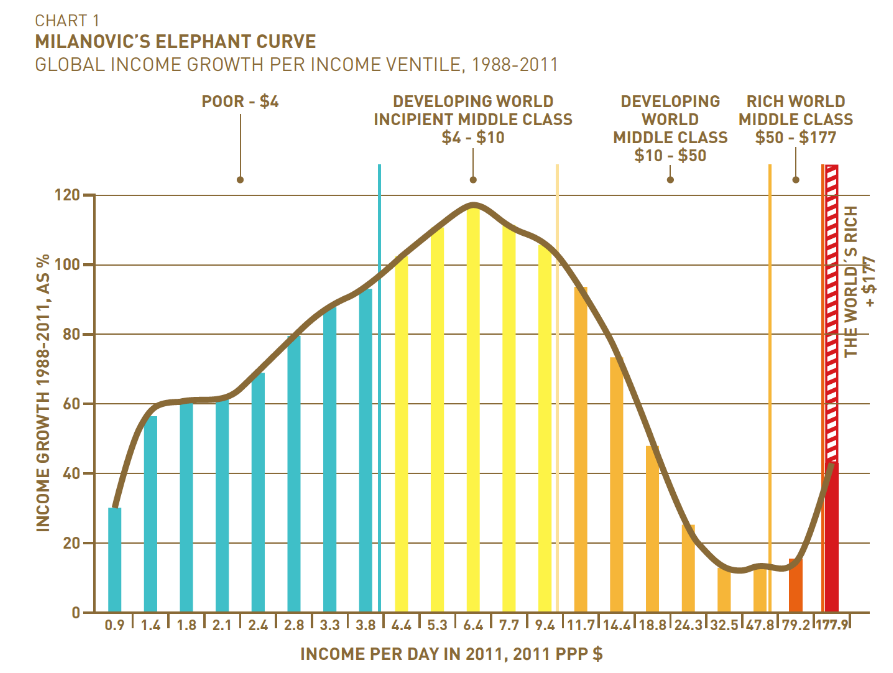 That's a prettified version of the graph with some self-explanatory info added by a think tank. For the original curve and explanation see the actual World Bank blog of Milanovic. Note that Milanovic has written book in the meantime "Global Inequality. A New Approach for the Age of Globalization", Harvard University Press, 2016.

This is seen as the (current) challenge of globalization, aptly put in the title of a 2018 paper "A globalisation challenge: preventing a clash between the middle classes of the developed and emerging economies"

When you speak of the advanced economies being "hostage", I'm guessing you had something like that in mind, not mere GDP growth. It's uncontested that in terms of GDP growth globalization has benefited both the advanced and emerging economies.

And another point; the more right-wing economists who loathe to talk of inequality, instead phrase the [same] problem as the advanced economies losing their comparative advance in low/middle-skills:

Lower-skilled workers in advanced economies are at a disadvantage because the comparative advantage in these countries has shifted. These nations now have a comparative advantage only in industries that require workers to have more education and to be flexible and adaptable to changes in the global marketplace.

My answer might be naive, but it seems to me that A would make a bad political choice by accepting B's demands just for the sake of preserving the strength of its economy:

In my opinion, this scenario is a clear illustration of the need for long term political vision to sometimes take precedence over short term economics. Also the scenario here is a bit simplistic: in reality A would have a range of options between accepting B's demands and refusing them.

Not the answer you're looking for? Browse other questions tagged economy international-relations .