Is first-past-the-post (plurality voting) neither an ordinal nor a cardinal method?

Approval Voting [which is a cardinal method] can also be compared to plurality voting, without the rule that discards ballots that vote for more than one candidate.

But strictly speaking, in the non-trivial case of more than two candidates, is first-past-the-post neither ordinal nor cardinal?

There are 2 components to a voting method.

The question of cardinal vs ordinal is only concerned with that first aspect.

The FPTP ballot is an ordinal one which omits all information except the top preference. It could easily be replaced with a full ordinal ballot with a complete ordering of preferences. Later in the process, when votes are being tabulated, all preference information other than the top ranking would simply be discarded. This would make the process more verbose, but would not in any way alter the outcome of the election.

The FPTP ballot could not be replaced with a cardinal one in the same way.

It sorta depends on the theoretical framework adopted. Brams and Fishburn (2002) put plurality in the "nonranked methods", i.e in same bin as (their favorite) approval voting:

The multicandidate elect-one social choice functions in this broad class are divided into nonranked one-stage procedures, nonranked multistage procedures, ranked voting methods, and positional scoring rules. Nonranked methods include plurality check-one voting and approval voting, where each voter casts either no vote or a full vote for each candidate. On ballots for positional scoring methods, voters rank candidates from most preferred to least preferred.

But that's not the only way to construe it. By a bit more mathematical artifice, it's possible to assume there exist even a linear ordering in the vote of each participant, but that the aggregating social choice function disergards anything but the first choice on each such (virtual) ballot. While this is a bit less natural with respect to the nature of actual plurality ballots, it does have one advantage, namely that it's possible to consider plurality as a "scoring rule" (with the obvious weights (1, 0, 0, ..., 0)), using the same general notion of "scoring rule" as for a more discriminating count(s), e.g. Borda count (which would have the scoring rule (m-1, m-2, ..., 0), where m is the number of alternatives). This is the approach taken by Zwicker (2016).

Using Fishburn's (1977) classification, Zwicker has something more interesting to say (about plurality). In Fisburn's classification there are three classes

One interesting point from Saari, in a much more friendly presentation of Klamler, are the Saari triangles (as they're now called). These illustrate some basic issues/notions with scoring rules for 3 candidates, based on a (projected) simplex representation the voting: 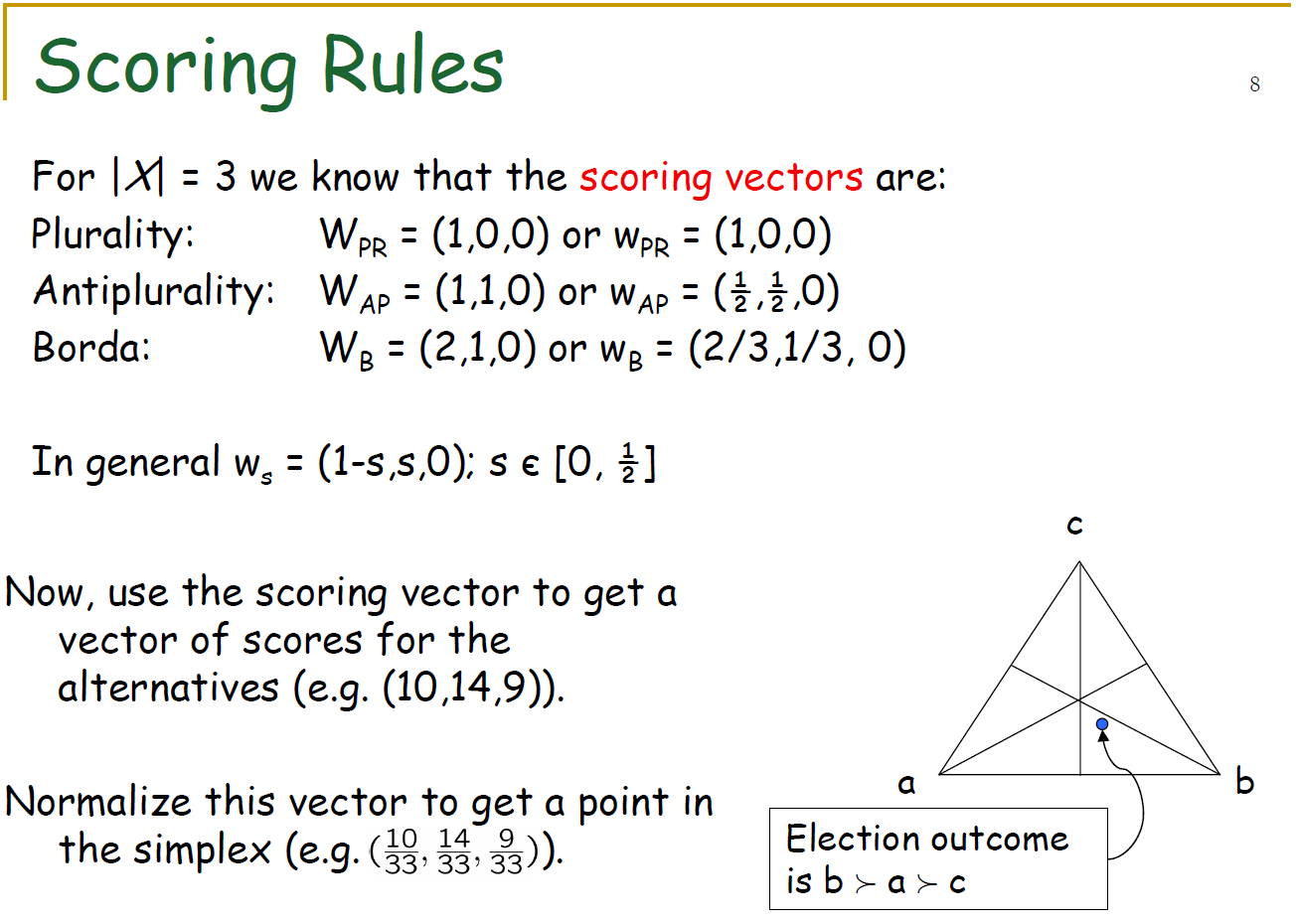 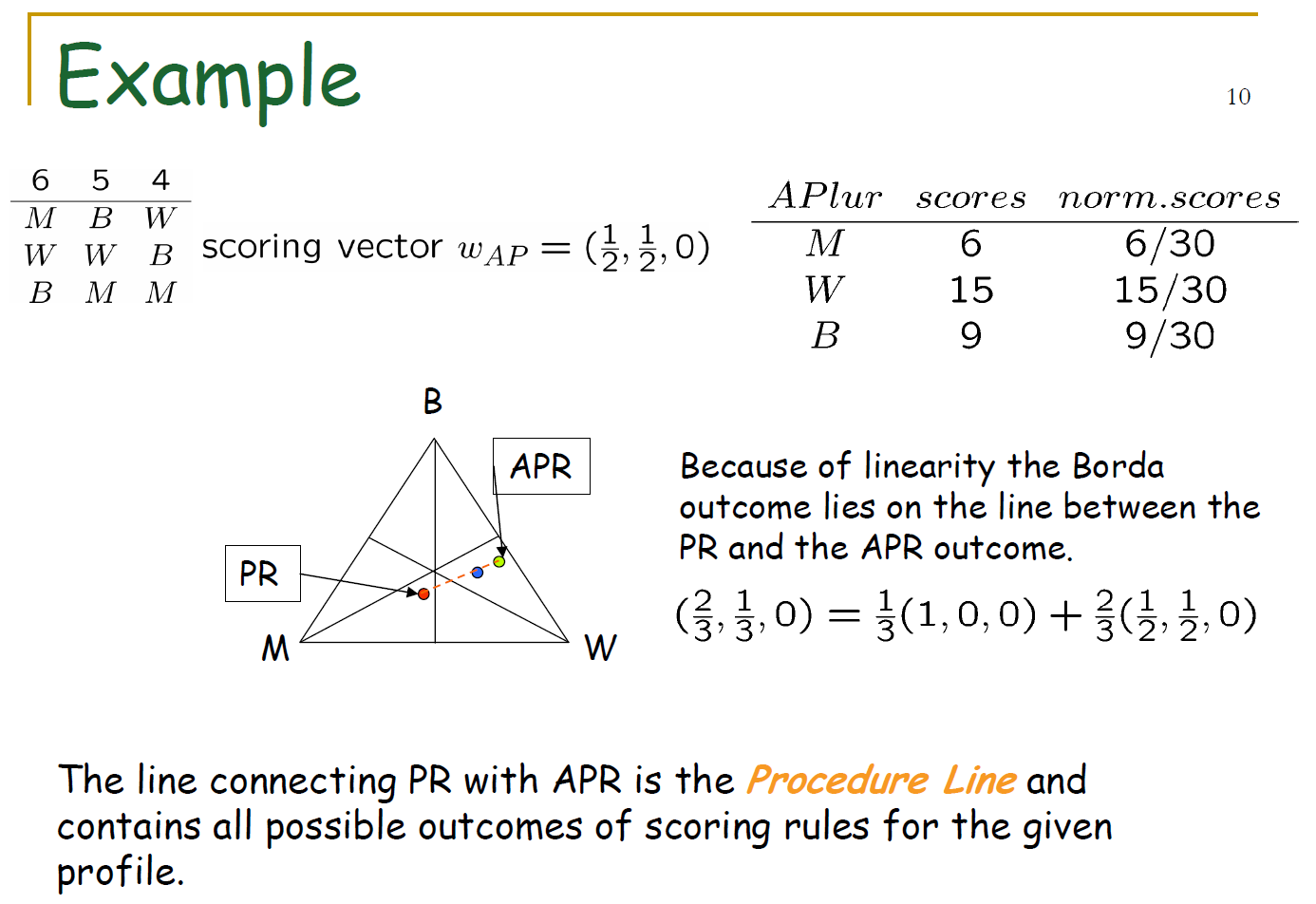 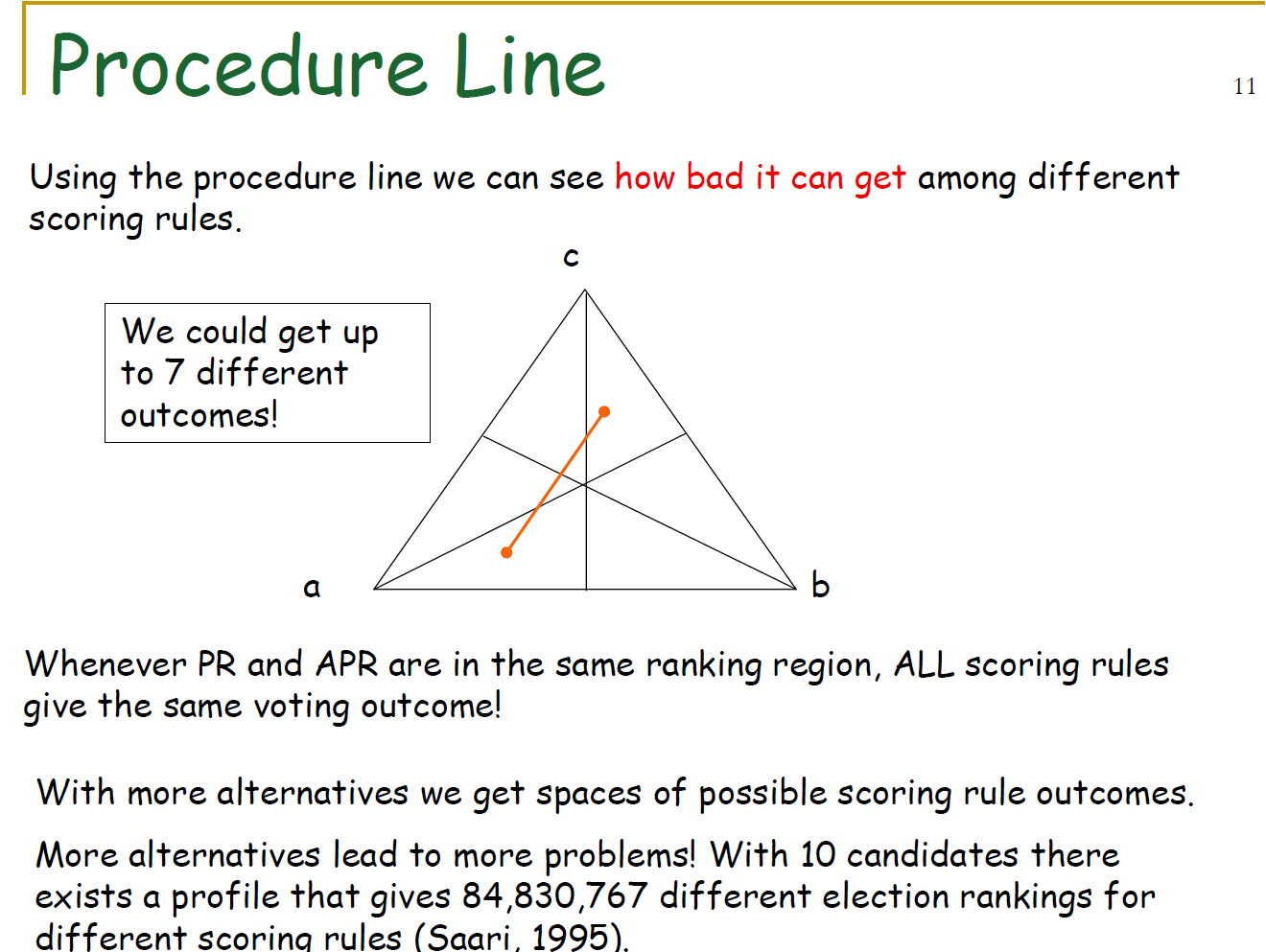 With this I hope to give you some idea why putting Borda and plurality "on the same map" is a useful exercise.

Moreover, if we relax the SCF [social choice function] notion by allowing voters to express indifference among alternatives, approval voting becomes an SCF—in fact it coincides both with Borda and with all Condorcet extensions, when these rules are suitably adapted to handle ballots with many indifferences.

There's nothing preventing this view (using a partial/weak order, and considering indifference among all non-top choices) from being applied to plurality voting as well, except that there's perhaps not much to be gained in doing so.

The reason for using cardinal (rating) or ordinal (ranking) methods is that they contain enough information to do an 'instant runoff' (which can assure a majoritarian result). Plurality voting lacks such information, as you can only choose one candidate per position. It is as much ordinal as it is cardinal, so it is neither.

IRV (instant runoff voting) is usually associated with ordinal methods, but any cardinal ballot choices can be converted to ordinal choices (but not vice versa).

Not the answer you're looking for? Browse other questions tagged voting political-theory .

1
Voting methods other than single-vote plurality in the USA?
3
Is this a good way to count Single Transferable Vote ballots?
14
Why do proportional representation voting systems not evolve to first past the post systems?
5
How is Approval Voting providing more information than an ordinal method?