Do compulsory voting systems allow blank votes or "none of the above" options?

I am wondering if compulsory voting systems allow for blank votes. By blank votes I mean an explicit act of choosing not to tick any option.

Wikipedia seems to mix blank vote with various types of voting under the umbrella of protest vote, but I am interesting in the particular types of blank and "none of the above", because they somewhat defeat the purpose of compulsory voting.

Question: Do compulsory voting systems allow blank votes or "none of the above"?

Belgium has de jure compulsory voting, which is de facto not enforced. Since it is recognized that filtering blank votes would be incompatible with anonymous voting, it is allowed, even when voting electronically. Invalid voting (e.g. picking representatives from different lists) is only possible when voting on paper and officially disallowed, but cannot be punished.

However: blank votes are treated the same as invalid votes and as such the meaning that is assigned to the vote is not "none of the above" but "I accept the vote of the decision as made by the valid votes". So if you have 100 voters, 20 of which cast an invalid or blank vote, 40 vote for A and 40 for B, the result will be the same as if 50 of the 100 had voted for A and 50 for B. Election thresholds are also expressed as percentage of the valid votes.

Spoiling or failing to mark a ballot correctly is a crime.

Australian ballot papers are single sheets of paper for each constituency being elected. They are to be marked by pencil. I think referreda are all questions on one paper, can't remember.

This crime isn't enforced, and couldn't be due to the secrecy of the election, unless someone does something daft like removing their ballots from the polling place and then posting video evidence that they'd left their paper blank on YouTube.

There are some unusual edge cases where a "below the line" ballot could conceivably run through all 150 12 valid preferences and exhaust without assigning all of its value to one of the last two candidates. (MMP quota preferential voting is weird, but achieves accepted outcomes here). The reason for requiring at least 150 preferences in the past, or at least 12, is that for a half senate election each vote is worth 1/6th of a seat. But that the vote must be counted "fully," ie: be available to be exhausted in the last two candidates vying for the last seat. To work this out you need to work out the "quota," ie, how many votes it takes to fill a seat: (Number of formal ballot papers / (Number of senators to be elected + 1)) rounded down + 1 = Senate quota. The last two candidates will need to make up their quota from transferred fractions of votes which have previously been used to elect others. For example. With a half senate election, and 150000 votes for quota, and 350000 votes for labour, and 350000 votes for liberal, each of the individual votes for labour (after electing two senators) will be worth (350000 - 150000 - 150000) / 350000, or 1/7th of a vote. If you took that 1/7th of a vote away from the 700000 people who voted for labour or liberal with their first preference, you'd be denying them a vote, so each of their individual votes flows to the 3rd preference of those electors. To prevent vote wastage, in the past electors who voted for individual candidates "below the line" had to vote for 150 or so candidates. If your state had fewer than 150, good for you, if you voted in NSW with 250 candidates (six to be returned), you had to number at least 150 candidates. Now you only have to number 12. So the rate of vote wastage has increased. This was largely due to above the line "list-voting" shenanigans with a guy specialising in creating nonsense parties to channel right wing votes from working class fascists, reactionaries and tories who'd vote for the "dog smugglers' party" but not "respectable conservative party, perhaps not far enough right wing despite running concentration camps." As part of the above the line list voting reform, they made voting lawfully below the line easier. You used to only get 3 "errors" allowed in a below the line vote. Everyone knows the system is rigged for the 2.75 party system (climbing towards 2.95) but many people vote below the line to "give electoral workers employment," or to "piss off politicians," or because they don't trust the party they'd vote for's list to not preference loony lefts or fascist running dogs.

Yes, the compulsory voting systems usually allow blank and null votes. But I guess each country has their own rules.

In Brazil we have compulsory voting. The vote is secret. Also, it's an electronic voting.

The voting machine is placed in a booth with some cardboard barriers, so no-one can see what you are doing on the machine.

The machine has a numeric keypad. It has the 0 to 9 keys, and another 3 larger keys: One WHITE key for BLANK vote, one ORANGE key to clear the field so you can type your vote again (used when you type incorrectly by accident), and one GREEN key that CONFIRMS that vote.

The machine will present a field on it's screen. You can type the numbers of your candidate. You have 3 options: 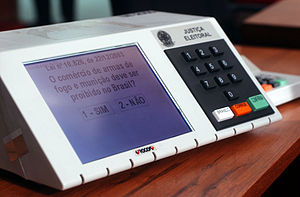 Samuel has many interesting details about the Australian voting system, but fails to address clearly the core of the question. I'll expand my comment here a bit.

Australia has compulsory voting at every government level (local, state, federal), and voting is actually enforced by means of monetary fines. The fine is not exorbitant (around $80 currently), but you'll surely get the bill. (In some local elections, they say the fines may cover a substantial part of the cost of the elections). There are higher penalties for something that would amount to forgery and obstruction, but the non-voting fine is by far the most common.

Now, the Australian ballot papers (at every level) do not provide "none of the above" options, and the legislation formally discourages any informal voting. But this cannot be really enforced due to secrecy of the vote. They can only register your attendance.

Currently, there is no electronic voting that could technically block an informal vote. All government voting is old-fashioned paper ballot.

It's also worth noting that Australian voting is preferential, where the voter sorts the candidates in the preferred order, rather than ticking the favourite one. So there is no place for the "none" option per se. It is much easier, however, to make a honest mistake and put the numbers wrong. There are rather complicated rules governing how to treat such cases, and in some elections there are allowed simplified methods of voting where you just select one candidate/party and thereby entrust them to distribute all other preferences (which leads to practices that Samuel described). Still, I believe it's fair to say there must be more "accidentally informal" votes in Australia than in other, simpler voting systems.

Not the answer you're looking for? Browse other questions tagged voting .

27
Has "none of the above" ever been added to a ballot? What was the effect?
9
How does offering two almost identical options in a Preferential Voting system affect the outcome?
14
Why do proportional representation voting systems not evolve to first past the post systems?
2
Electing officials by least disliked or the candidate that creates the least "resistance" among the voters
3
In the Portuguese legislative elections, how are blank votes distributed?
2
Why don't more democratic countries reject all candidates if NOTA exceed candidates's votes?
5
What states used voting equipment by Dominion Voting Systems for the 2020 election (if any)?
3
Do gun permits that can be used as voter ID all have a photo?