Are there some studies which measure the level of politicization of courts in a trans-Atlantic perspective?

It's easy enough to find a Europe-only comparative perspective on the politicization of the judiciary, e.g. Werkmann (2017): 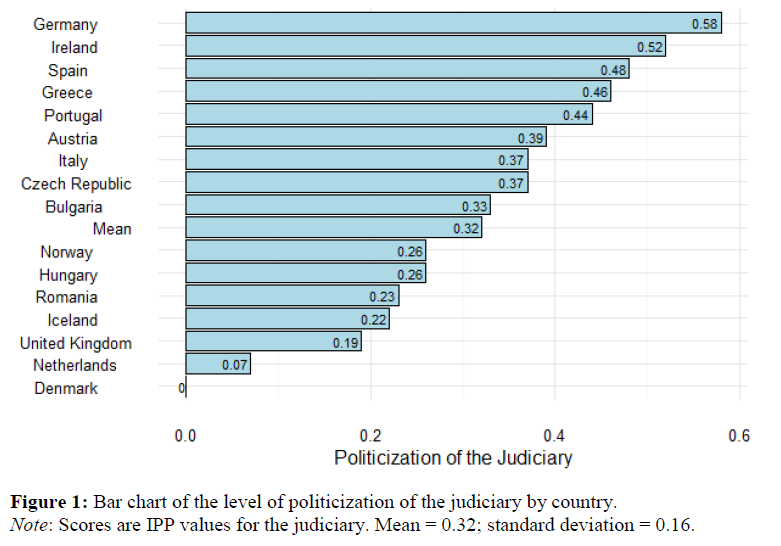 The authors measured the level of politicization in each country with the Index of Party Patronage (IPP) which is calculated by using the median values for the range and depth of patronage in nine policy areas (i.e. Economy, Finance, Judiciary, Media, Military and Police, Foreign Service, Culture and Education, Health Care, and Regional and Local Administration) and three institutional types (i.e. ministerial departments, non-departmental agencies and commissions, and executing institutions). For the purpose of this study, the IPP is disaggregated to single out the level of politicization in the area of interest, i.e. the judiciary. The IPP ranges from 0, corresponding to complete absence of patronage practices, to 1 which indicates a full overlap of party and the state. Intermediate values are interpreted as follows. In general, a score of around 0.65 indicates that parties exert control over appointments in most institutions at all levels of the administration, a score of approximately 0.4 corresponds to partisan appointments in most institutions but only at top and middle levels, whereas a score of 0.1 means that party patronage occurs in a limited number of institutions and only at the top level. In the context of this study, a value of 0.4 thus translates to political appointments to top-level positions in the judiciary such as the chairman of court or senior judges, as well as middle positions in most of the national courts and the national ministry of justice. Scores on the bottom of the scale indicate that political parties are mostly uninvolved in the appointments to the judiciary

(You may or may not agree with this, and other studies [with different methodology] may have different results). What I want to ask here (with some relation to a recent question): are there trans-Atlantic studies measuring/comparing the level of politicization of the judiciary in most Western (or even OECD) democracies?

79
Why is the debate on the composition of the U.S. Supreme Court so politicised?
3
Are there parliamentary republics where Supreme Court appointments are decided exclusively by the Parliament and the government?

3
Are there some patterns as to which judges in US are elected and which are appointed?
8
Does Sweden have greater intergenerational social mobility than the USA when compared to USA incomes?
1
Did Reagan's use of "God bless America" in his 1980 speech reflect tones that were already present in the political discussion?
2
Is there a correlation between nationalism/conservatism and lack of judicial independence/rule of law?
3
Can a large number of federal judges be confirmed at once in the US Senate?
6
Are party fractionalization and ideological polarization independent (uncorrelated)?
18
On what dimensions does the current Republican party differ substantially from the right-wing parties in Europe?
1
Are there any EU/NATO/Atlantic help programs for Italy?