Is Judge Roberts committed to the status quo against partisanship?

I was surprised to see some commentary in this answer and its comments indicating that Supreme Court Justice John Roberts is committed to maintaining status quo jurisprudence against substantial conservative swings, and that he might compensate for the appointment of conservative justices by moving left.

The traditional argument in favor of this is John Roberts' vote in the first Obamacare case (and to a lesser extent the second). That suggested that Roberts was unwilling to overturn legislation over technical matters.

Another argument can be seen by looking at data posted in an article by the same person as made the cited chat comment (Oliver Roeder). That includes the following graphic: 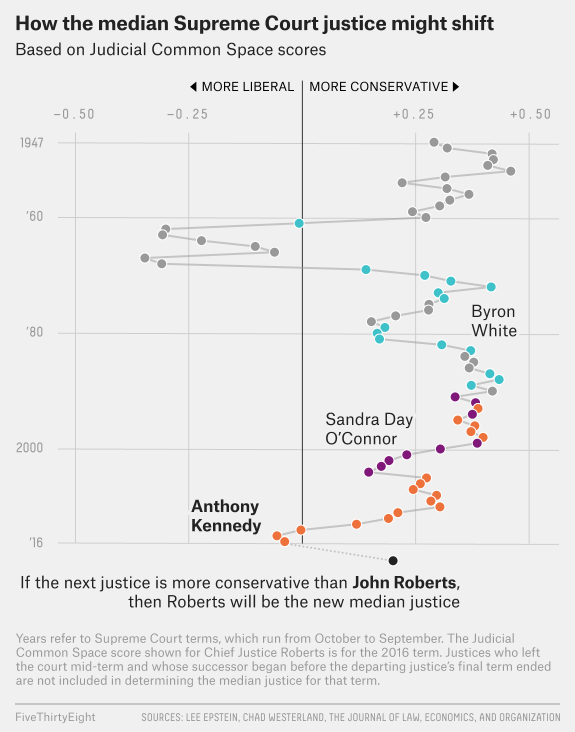 Notice that after Byron White retired, the median justice was either Sandra Day O'Connor or Anthony Kennedy. Both of them, in their last few years before retirement, voted much more liberally than during the rest of their tenure.

It is possible that Roberts might make a similar shift. There is definite support for that kind of change in jurisprudence.

It is also worth noting that Roberts in 2016 was more liberal than either of those justices were except for their last few years. For most of their tenure, O'Connor and Kennedy were more conservative than Roberts currently is. Other than the 1960s, the last three years of O'Connor's tenure, and the last five years, Roberts' jurisprudence is mostly more liberal than that of the typical median justice. At least as measured by Judicial Common Space scores.

I cite these as evidence that Roberts does care whether the Court is perceived as partisan. It's unclear how far that would take him in terms of voting.

8
What power, if any, does the SCOTUS Chief Justice have to hamper or reject an appointment they dislike?

9
Can the Senate postpone confirming a new Supreme Court judge virtually indefinitely?
8
Could a President withdraw nominated Supreme Court judge before confirmation by the senate?
28
Isn't the question of partisanship of US supreme court judges contradictory to the separation of powers?
11
Is there a "nuclear option" regarding the election of a constitutional judge in Germany?
4
Can John Roberts rule on whether witnesses have to testify in the impeachment inquiry?
1
US Chief Justice Roberts' choices of "in conformity with" and "in conformance with" during the swearing in at the Senate
5
Have Democrats said a late-presidential-term Supreme Court Justice appointment will be subsequently neutralized?
26
Can the Democrats filibuster the vote for a new judge for the Supreme Court?
4
Will social conservative voters still "need" Trump if his Court appointment succeeds?
30
Why didn't the Republican party confirm Judge Barrett into the Supreme Court after the election?