What are some examples of recent concrete policies within the EU Common Agricultural Policy?

The Common Agricultural Policy (CAP) of the European Union, launched in 1962, aims to provide consumers with a stable supply of affordable food and to support farmers with stable incomes. It promotes the development and modernization of the agricultural sector to improve productivity. Nowadays, CAP has a special focus on sustainable agriculture.

Despite a decrease of its importance in the EU budget over the last decades, it remains a substantial part of the EU annual budget (approx. 40%).

What are some examples of recent concrete policies led by the EU's CAP ?

The Common Agriculture Policy (CAP) is not a single programme on its own but a collection of several different programmes dealing with agriculture and rural development. Notice that when you ask for concrete policies you're not asking for legislation but strategy (Policy):

A policy is a deliberate system of principles to guide decisions and achieve rational outcomes. A policy is a statement of intent, and is implemented as a procedure or protocol. Policies are generally adopted by a governance body within an organization.

That being said the main objectives of the modern CAP were established in the Treaty of Lisbon (Article 39; 2007):

(b) thus to ensure a fair standard of living for the agricultural community, in particular by increasing the individual earnings of persons engaged in agriculture;

(d) to assure the availability of supplies;

(e) to ensure that supplies reach consumers at reasonable prices.

There were more recent reforms (2013, see also this) and others are planned in the future following the Consultation on modernising and simplifying the common agricultural policy (CAP) (whose results you can see here).

In 2018 the Proposal for a REGULATION OF THE EUROPEAN PARLIAMENT AND OF THE COUNCIL establishing rules on support for strategic plans to be drawn up by Member States under the Common agricultural policy (CAP Strategic Plans) [...] was made which proposed:

(d)Contribute to climate change mitigation and adaptation, as well as sustainable energy;

(e)Foster sustainable development and efficient management of natural resources such as water, soil and air;

(f)Contribute to the protection of biodiversity, enhance ecosystem services and preserve habitats and landscapes;

(i)Improve the response of EU agriculture to societal demands on food and health, including safe, nutritious and sustainable food, as well as animal welfare.

Consequently the Future of the common agricultural policy (beyond 2020) was established which defines nine objectives: 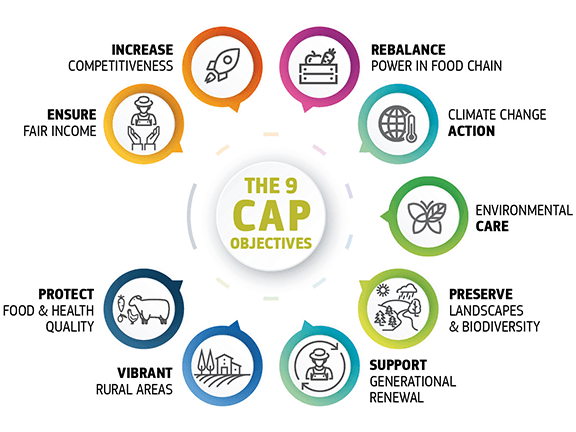 The same source has several links to factsheets and legal texts which you can explore. Also if you really want to go heads on towards legislation (as concrete as it gets) you can use EUR-LEX (EU law portal).

EDIT: CAP is not in itself an institution. It's just a set of guidelines (policy) defined in Treaty, whose future regulations, directives (and so on...) must respect (otherwise they might be halted following a CURIA decision).

I believe an adequate analogy would be: (1) CAP defines the grand strategy, (2) EU regulations (which must respect CAP) set the rules for EU members, (3) EU members build their own national legislation respecting EU rules and their own strategy. So you can expect more and more concrete legislation the further you go down the chain. At the last level you'll have different legislation in different member states.

Relating to your question: "For instance, regarding (g) how does one plan to attract young farmers (whether the related legislations are still to come or not) ?"

You can refer to Regulation (EU) No 1305/2013 of the European Parliament and of the Council of 17 December 2013 on support for rural development by the European Agricultural Fund for Rural Development (EAFRD) and repealing Council Regulation (EC) No 1698/2005 which sets member state rules to reach the CAP objectives (for example financial incentives, start-up aid, and in what circumstances). Here is a quote from that document:

(a) business start-up aid for:

...(iii) the development of small farms;

Considering the rules set by this document member states must update their own legislation to follow the EU regulation. To see even more concrete legislation you'll have to move down towards national legislation which depends on member state (there are a few exceptions, I believe, such as the direct payment system).

And here is another relating to the standardization of eggs: Commission Regulation (EC) No 589/2008 of 23 June 2008 laying down detailed rules for implementing Council Regulation (EC) No 1234/2007 as regards marketing standards for eggs

Not the answer you're looking for? Browse other questions tagged european-union agriculture .

8
Is it common to deny airspace access rights to personae non gratae within the European Union?
8
Are there any examples of politicians within EU countries that have been elected after being convicted?
5
Restrictions on reform to the common agricultural policy by the UK post-Brexit
20
Why does the Common Agricultural Policy exist?
5
Does the EU Common Fisheries Policy cover British Overseas Territories?
3
Are regulatory compliance checks performed within the EU bloc?
12
Why is the Common Agricultural Policy unfavourable to the UK?