The free-trade agreement offered by the EU to the UK

Is it fair to describe the FTA offered to the UK by the EU as a Canada-style agreement, but with the caveat of regulatory alignment in Northern Ireland?

This is a shorthand way of describing this kind of deal. Two countries who have some kind of special trade relationship with the EU are Norway and Canada, so trade arrangements that are similar to those can be described in short as a "Norway type deal" or a "Canada type deal". It avoids the need to say "A free trade agreement on goods but not services with some easing of non-tariff barriers". Saying "Canada style" is somewhat clearer than saying "hard brexit".

During the referendum campaign, the example of Canada was sometimes suggested by those who wanted to leave, as an example of how a country could have a trade deal with the EU, without membership of the ECJ and other institutions of the single market.

It's a bit more comprehensive than the CETA Canada-EU FTA agreement. For simplicity it's being labeled as a "Super Canada" or a "Canada+" deal and it's somewhere between an FTA (Free Trade Area) and an EUAA (European Union Association Agreement or AA for short).

An FTA is a purely oriented trade deal with the objective of lowering trade barriers. An EUAA also includes other aspects like policy, culture, security, etc. There's a lot of interest by the EU and the UK in continued collaboration in areas such as security, and the relation of some of the UK regions with the rest of the EU (Northern Ireland and Gibraltar, for example) so this style of deal seems, at this point, the most likely (but I refrain from being too assertive in my predictions; the current UK political context is prone to quick changes).

This table (I believe originally published in The Telegraph) in this BBC article is quite useful in understanding the differences between the now defunct Chequers plan and Canada+ style deal. 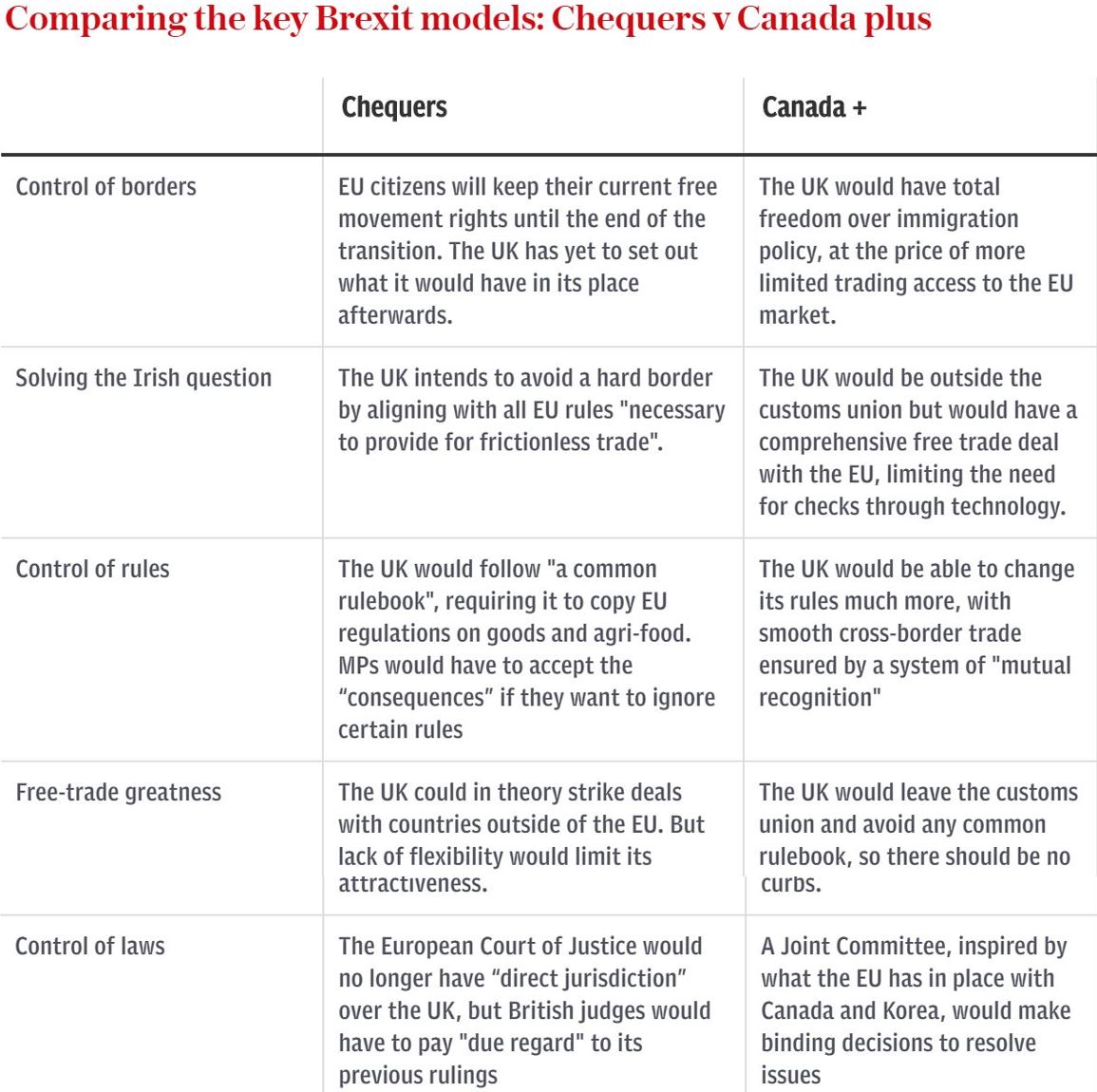 Although this description is likely quite close to what a Canada+ style deal would be, notice that this is not definitive (it would still need approval from a bunch of institutions such as the EU council and parliament, as well as all members).

Factually speaking, whatever the deal might be, it needs to follow the European Council (Art. 50) guidelines on the framework for the future EU-UK relationship, 23 March 2018 which continues to assert that:

The European Council recalls that the four freedoms are indivisible and that there can be no “cherry picking” through participation in the Single Market based on a sector-by-sector approach, which would undermine the integrity and proper functioning of the Single Market

The same can be said about the EU Parliament. A good example of a kind of declaration of intention is the motion for European Parliament resolution on the framework of the future EU-UK relationship which states:

– protection of the integrity and correct functioning of the internal market, the customs union and the four freedoms, without allowing for a sector-by-sector approach,

– preservation of the autonomy of the EU’s decision-making,

– safeguarding of the EU legal order and the role of the Court of Justice of the European Union (CJEU) in this respect,

– continued adherence to democratic principles, human rights and fundamental freedoms, as defined in particular in the UN Universal Declaration of Human Rights, the European Convention on Human Rights and Fundamental Freedoms and its Protocols, the European Social Charter, the Rome Statute on the International Criminal Court and other international human rights treaties of the United Nations and the Council of Europe, as well as respect for the principle of the rule of law,

– a level playing field, in particular in relation to the United Kingdom’s continued adherence to the standards laid down by international obligations and the Union’s legislation and policies in the fields of fair and rules-based competition, including state aid, social and workers’ rights, and especially equivalent levels of social protection and safeguards against social dumping, the environment, climate change, consumer protection, public health, sanitary and phytosanitary measures, animal health and welfare, taxation, including the fight against tax evasion and avoidance, money laundering, and data protection and privacy, together with a clear enforcement mechanism to ensure compliance,

– safeguarding of EU agreements with third countries and international organisations, including the EEA Agreement, and maintaining the overall balance of these relationships,

– safeguarding of the financial stability of the EU and compliance with its regulatory and supervisory regime and standards and their application,

– a right balance of rights and obligations, including, where appropriate, commensurate financial contributions;

At this point, given the EU and UK red lines, the Canada+ style deal seems to me the only option which manages to bring enough support to be realistically implemented in the next year.

For more on this subject I found this article (The future of EU-UK trade partnership: what is the EU offering?) particularly useful in the redaction of this answer.

4
Does the UK-EU Joint Report essentially remove any leverage the UK has in further negotiations?
1
Is there anything uniquely difficult about repealing Treaty law?
11
What did Theresa May mean by: the EU wants a backstop to the backstop?
4
Is it true to say that the Chequers proposal will preclude importing goods from outside the EU that do not meet EU standards?
7
Why does Brexit threaten the Good Friday Agreement from 1998?
1
The backstop in the European Union (Withdrawal Agreement) Bill
3
How was Northern Ireland governed prior to the Belfast Agreement?
4
In the revised Irish Protocol when would the first Northern Irish consent vote occur?
3
The Belfast/Good Friday Agreement and the revised Ireland/Northern Ireland Protocol