Does low voter turnout favor the Republican Party? Historically is there a causal relationship between turnout and political affiliation?

Establishing a causal relationship is hard.

There are established correlations between

It is therefore reasonable to suppose that there is a relationship between political identification and the likelihood of an individual voting, and non-voters are more likely to identify with the Democratic party. If there are more Democrats who are habitual non-voters, then efforts to encourage voting will tend to favour the Democratic party

What is less clear is whether the headline turnout rate affects the result. A low turnout can either be because Republicans or because Democrats stay at home.

Richard Nixon and Donald Trump won election with a turnout close to 60%, Clinton won in 1996 with one of the lowest turnouts, close to 52%. Considering Elections since 1960, There is little correlation: 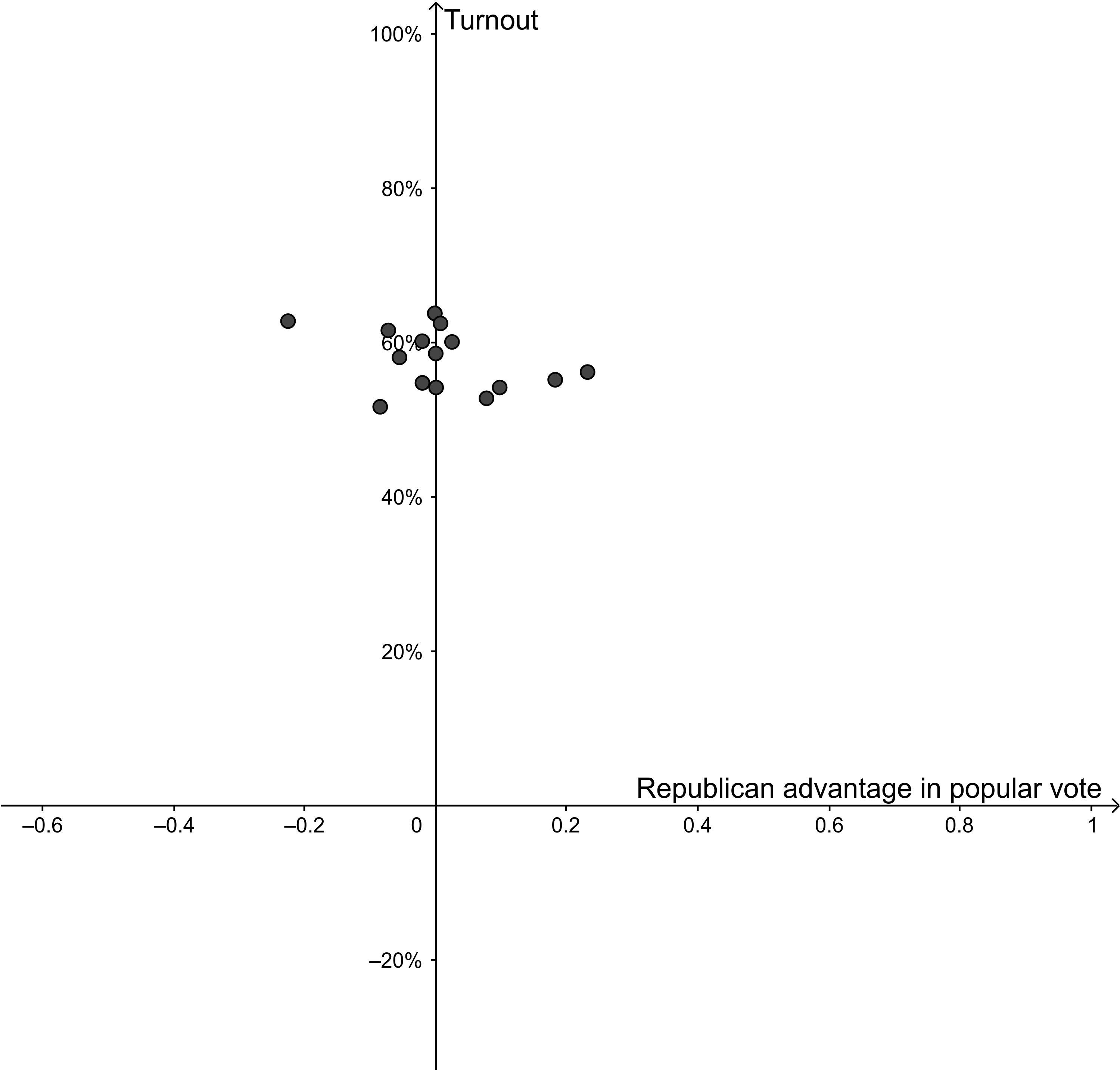 There are cases where low turnout may favor the Democratic Party; it depends on the election.

In How Democrats Suppress The Vote, November 3, 2015, by Eitan Hersh, an assistant professor of political science (formerly) at Yale University, it is argued that "Off-year elections have much lower turnout, and Democrats prefer it that way."

In the ongoing fight between Democrats and Republicans over election procedures like voter ID and early voting, the Democrats are supposedly the champions of higher turnout and reducing barriers to participation. But when it comes to scheduling off-cycle elections like those taking place today, the Democratic Party is the champion of voter suppression.

Indeed, few people will vote today. Many elections are taking place, but almost all are for local offices. School boards, for example, are up for election in Houston; Fairfax County, Virginia; Charlotte, North Carolina and in hundreds of other communities that oversee the education of millions of schoolchildren. But only a small number of highly engaged voters will participate in the elections for these offices.

Scheduling local elections at odd times appears to be a deliberate strategy aimed at keeping turnout low, which gives more influence to groups like teachers unions that have a direct stake in the election’s outcome.

Consolidation is popular, and during the decade-long period between 2001 and 2011 that Anzia studied, state legislatures across the country considered over 200 bills aimed at consolidating elections. About half, 102 bills, were focused specifically on moving school board election dates so that they would coincide with other elections. Only 25 became law.

The consolidation bills, which were generally sponsored by Republicans, typically failed because of Democratic opposition, according to Anzia. By her account, Democrats opposed the bills at the urging of Democratic-aligned interest groups, namely teachers unions and municipal employee organizations.

[Tables regarding support for election consolidation not presented here.]

Why do Democrats and Democratic-aligned groups prefer off-cycle elections? When school boards and other municipal offices are up for election at odd times, few run-of-the-mill voters show up at the polls, but voters with a particular interest in these elections — like city workers themselves — show up in full force. The low-turnout election allows their policy goals to dominate.

Anzia shows that off-cycle elections lead to higher salaries and better health and retirement benefits for teachers and public employees.

NOTE: Anzia refers to Sarah Anzia, a professor at the University of California, Berkeley.

4
Does high turnout (on average) actually only slightly favor Democrats?