Does the EU require preferential trade within itself?

I was talking to someone about BREXIT the other day and they presented a reason for voting leave that I hadn't heard of before. They claimed that entering the EU had always seemed unfair, to them, on poorer countries since we would have to give first call to other EU countries (this was their original reason for voting against joining in the first place - a vote I wasn't born in time for). A sort of 'the rich get richer' idea she had been against from the start.

Does the EU insist that its members trade first with other members of the EU?

I think you may be confusing this a bit. I am not aware of a "members trade first" requirement, and in any case, private entities are free to trade with whomever they wish. There is however a different requirement which might fit the argument you are citing.

What the EU requires is that all member states are treated equally in government tenders. So, if a small country wants to build a new highway, it cannot restrict the tender to domestic responders only. It is obliged to let any EU construction firm respond, and to choose the bid with the lowest total sum. What happens in practice is that established firms from rich countries (think Strabag, or frequently Siemens if it is not a highway but an automation related project) submit bids they could never fulfil if they were to bring their own personnel over, they win the bid, and then get the local firms (who would have won the bid otherwise) as subcontractors, paying local wages to almost everybody except to 1-2 high-level managers from the own firm.

This practice has a variety of effects. On the positive side, the winning firm frequently is better organized than the local ones, and if things go awry, it is a serios outfit with money behind it, and if sued, would have the money to pay. (It has the money for good lawyers too, though). Also, in small and poor countries, sometimes the local companies are in debt (sometimes through no fault of their own, if their partners frequently default on them) and are barred from bidding on government tenders. As subcontractors, they at least get the chance to work on these projects, and its workers get wages which stay in the local economy.

On the flip side, you also have a situation where the larger cut of the profits goes to the bid winner and not to its subcontractors, thus leaving the country. There are also smaller effects, such as having the job openings for the most qualified and highly paid positions in the large company outside the country, indirectly increasing the brain drain towards the rich countries.

What is most visible, and people complain about, is that "the Germans gets to build our highway now, not our guys" (they frequently don't even know about the local subcontractors, since it is the Strabag signs you see at the construction site) while they expect that, without the EU rules, the country would be able to enact a protectionist law where only local firm can bid on the juiciest projects. It is probable that you heard a version of this, and without knowing the context, you took it to mean that there is some kind of trade obligation.

Not as a requirement but in practice it happens. This is largely due to tariffs, quotas, and regulations. Inside the EU Single Market there is much less friction than in between the EU and other blocks. This means less trading costs, which ultimately leads to cheaper EU products giving them a competitive advantage. Also a product being produced outside the EU which does not follow the EU minimum standards cannot be sold within the market so an exterior producer would need to adapt it's own production to EU regulations. For a very recent example of this you can refer to NOTICE TO STAKEHOLDERS - WITHDRAWAL OF THE UNITED KINGDOM AND EU FOOD LAW where things like this are mentioned (this was previous to the actual draft agreement so things may change in the near future):

As of the withdrawal date, the importation of food of animal origin from the United Kingdom into the EU-27 is prohibited, unless certain requirements are met, including:

In any case both Preferential Origin and Preferential Quotas are well known mechanisms in EU and international trade in general. And there are certainly preferences for each member state, specifically in protecting their own industries:

2. Can all products benefit from preferential origin?

No. A country will not grant preferences to goods, which it considers to be sensitive for its industries. Certain goods will therefore be excluded from the terms of the preferences offered. Where there is a bilateral agreement, this is a matter for negotiation between the parties. It is always necessary to confirm that your goods are amongst those that are covered in the arrangements between your country and that of your trading partner.

Further there are also some issues inside the EU itself such as quota limits for each member state for specific products. If a member state exceeds its quota a payment (like a fine) has to be made. This is indeed problematic for the low income EU states because they loose their low-cost advantage for any given product (thus the structural funds which balance somewhat the equation but typically at a cost for their own domestic production sectors). Also large companies tend to benefit more from the quota system, often leaving small producers in a difficult position (but this enters the realm of domestic policy). In any case this is a complex subject for which different members benefited from in different times (UK included).

However notice that the EU already has EPA and EBA agreements with many less developed regions in Africa, Asia, and America, which enjoy duty free or preferential tariffs (see: EU Trade Policy and Africa Exports for an example). 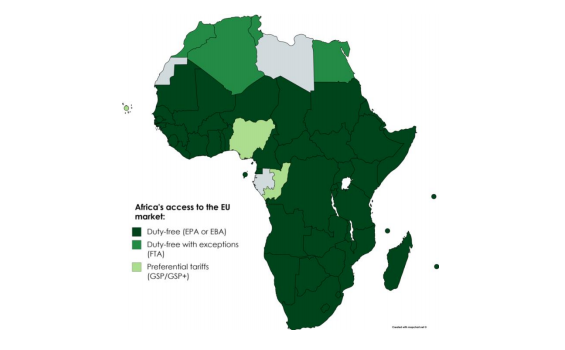 Joining the EU meant that Britain had to give up its existing trade partnerships with non-EU states. This is because international trade treaties are handled at an EU-wide level.

Prior to joining, the UK had preferential trade treaties with many former colonies, and these did indeed have to be given up. It didn't mean that we couldn't trade with them, or that we were required to give preference to EU nations, but it did mean that the cost of trading with those nations went up, and at the same time, the cost of trading with EU nations went to zero.

Given the scope of the former British Empire, the countries affected by this change obviously included many of the world's poorer nations. Losing these treaties didn't have much effect on the UK as there was relatively little trade anyway, but it would have been felt disproportionately on the other end. The real impact was felt by some of the larger Commonwealth countries, such as Australia and India, as the UK historically had quite significant trade with those nations, a lot of which disappeared in a relatively short space of time.

5
Why does there exist an implicit assumption that equalizing the standards of living across the EU won't harm the richer members?
6
Does the EU-Japan trade agreement include ISDS?
18
Does stopping metal imports alone cover the trade deficit of the USA?
3
Does the WTO itself have any input into trade agreements?
9
What's Rees-Mogg's constituency, socioeconomically?
8
How to explain the importance of European Parliament elections to a regular folk living in Eastern Europe?
1
Do trade or currency wars require congressional approval?
13
How does the recent EU-UK trade treaty "go beyond a Canada-style" agreement, but still not require ratification by national parliaments under EU law?