Why is May in charge of Brexit negotiations? What happened to the prominent Brexiteers?

I don't follow UK politics much, but I did get interested during the Brexit referendum two years ago. Back then, the main names I recall are David Cameron, Boris Johnson, and Nigel Farage, and maybe also Corbyn I think. At least, those were the names you constantly read about in the papers. I don't recall ever hearing the name "Theresa May".

I also know that Boris Johnson and Farage were the ones that were mainly pro Brexit and Corbyn and Cameron were against it.

Then the Brexiters won the referendum, and now that the negotiations are at the latter stage, I am again getting interested in UK politics. However, what I don't understand is, where did May come from? Why is she leading Brexit negotiations all of a sudden, when she played no significant role of promoting Brexit during the referendum? And I'm not seeing Farage or Johnson anywhere? What happened?

In short: why aren't the main endorsers of Brexit, the ones we kept hearing about during the campaign in 2016, not the ones leading the negotiations?

In short all Leave candidates who put themselves forward for the PM job lost in a run-off to Andrea Leadsom (a Leave supporter) who then backed out. Major Leave supporters were given top level ministerial jobs, including arguably the most important one of Brexit Secretary - the Chief Negotiator position - and then resigned when they were unable to deliver anything that they personally approved of as a consequence of the negotiations.

Your best starting place is probably here; Conservative 2016 Leadership Campaign. It's difficult to assign motives if the individuals involved haven't made specific statements, and there's obviously a level of trust you'd have to place in those that have made them.

The key points that left Theresa May in charge are detailed in the Wikipedia link above, but can be best summarised as;

Since the referendum a number of high profile Leave campaigners have been involved in the negotiations. Brexiteer David Davis was the lead negotiator as Brexit Secretary for two years before resigning, while Boris Johnson was the Foreign Secretary for the same period. Dominic Raab, also a long time Leave supporter, then took over as Brexit Secretary and lead negotiator until the final Deal was agreed on the 14th November 2018. He then resigned stating his unhappiness with the deal.

As an aside, Nigel Farage was at the time the leader of UKIP, a separate political party with 2 MPs at the time, neither of which was Farage. There is no realistic way he would have been involved with running the country following the referendum. At best, he might have been offered a cabinet position, although I don't know if he could have remained an MEP under those circumstances. Party politics make that unlikely, because UKIP has been seen historically as a party drawing voters away from the Conservative party, making them unlikely to raise its profile in anyway, especially following the success of the Leave cause they had campaigned in favour of for such a long time.

Other answers have given details of the history, so I will seek to explain the reasoning behind it.

The Tory party has been divided on the EU since before the UK joined. Cameron was attempting to put to rest an issue that had plagued every Tory PM for decades by holding a definitive referendum.

After the referendum result Cameron could not continue as leader, having lost the referendum (he strongly supported remaining). As a remainer he would have faced severe criticism for not really believing in the thing he was supposed to be negotiating, something that later damaged May. He couldn't realistically lead the party into the next election either, due to having already lost a vote.

The question then became who would take over. A number of Brexit supporting candidates came forward for the Tory leadership contest, but all dropped out. It became apparent to them that there was not enough support for their hard Brexit ideas within their own party, meaning that they would have no realistic chance of delivering it.

Essentially they all realized that he Tory party was still just as divided and that the task they were faced with was impossible. May apparently felt that she could deliver some kind of compromise that would be acceptable to enough people to pass it, and pressed ahead.

I'm speculating by she may have thought that weak opposition from the Labour party would help her. She certainly thought it was a good idea to call a general election early, in the hope of gaining a larger majority and thus being able to isolate the hard line Brexitters in the Tory party. In other words she wanted enough moderates and loyalists in Parliament to pass her compromise deal, but her plan failed spectacularly when Labour, and Corbyn in particular, proved to be more formidable than she had reckoned.

So the short answer is that all the strong Brexit supporters realized that actually delivering Brexit would destroy them and make their legacy one of failure, so stepped back to let May take the fall.

This is covered in this section of David Cameron's Wikipedia page, albeit indirectly. It's also discussed on the page for the referendum itself.

Basically, David Cameron was the Prime Minister at the time of the Brexit referendum, and was responsible for scheduling and overseeing it. I believe his party (the Conservative Party) was officially neutral on the vote, but he gave permission for anyone in it to campaign for whichever side they preferred. He, personally, preferred to stay in the EU, and he resigned when the final vote was for "Leave". Thesera May was chosen as the replacement Prime Minister, and thus is now responsible for actually arranging it.

“the Chief [Brexit] Negotiator.. then resigned when [he was] unable to deliver anything that [he] personally approved of as a consequence of the negotiations.”

What happened was that the Prime Minister had two Brexit strategies running in parallel. One in public, led by the elected representative Brexit Secretary (David Davis), and one quietly behind the scenes led by a civil servant named Olly Robbins.

Brexit can be split into two parts: the Withdrawal Agreement and the Future Relationship.

The Withdrawal Agreement is the legal agreement defining the process by which the UK will leave: for example financial settlements, dates and rules for any period of transition.

The Future Relationship is the legal text used to define the UK/EU relationship after any transition period. ie. for the long-term.

As Brexit Secretary, David Davis was unhappy with elements of the Withdrawal Agreement as it slowly emerged in 2017/early 2018, but his team’s primary focus in early 2018 was the really important text: the Future Relationship.

The Prime Minister then announced that the Draft Future Relationship text would be revealed on 12th July 2018 at her official country house named Chequers.

It immediately became clear to David Davis, the Brexit Secretary, and the people’s representative in this area of policy, that his work was to be ignored and that another document, written by the second team inside the Civil Service, was to be used as the basis for Brexit. Davis then resigned (along with his deputy).

So the Brexit Secretary’s manager revealed that she had gone behind his back for a period of months to develop her own plan to replace his. This was a firing, not a resignation.

The answer to the wider question as to “what happened to all the Brexiters?” is simple: Brexit was a revolt against the political establishment. So there were almost no Brexiters in a position of power in the first place.

There were a handful (a minority) of Brexiters in the Prime Minister’s cabinet, but they have mostly resigned by now in protest at May’s deal.

And Nigel Farage was an MEP, not an MP.

You ask about Boris in a comment. Boris did launch a campaign to run for PM, but shortly after thereof another MP (Michael Gove) who was also reputed to be a Leaver stepped up to be in the running for the leadership. Gove was widely perceived to be the more serious, more capable and more rounded candidate and therefore likely to win. Furthermore, Gove immediately went on the offensive against Boris who had been a close ally only hours earlier, saying he “cannot provide the leadership or build the team for the task ahead.” This sequence caused people to say that he had “knifed Boris.”

This forced Boris to re-evaluate his chances of winning, and he dropped out of the race. Gove then subsequently lost to Leadsom. Presumably this loss was contributed to by his perceived poor conduct wrt Boris. His motivation for running in this way was unclear. However, with Gove subsequently backing both the loathed Withdrawal Agreement and a Future Relationship scoffed at by Leavers, questions can be raised about his true status as a Leaver. If Gove was actually a Remainer, then this would not be without precedent. Philip Hammond (the current Chancellor) indicated prior to the vote that he could vote to leave the EU. It has become abundantly clear since that he is a firm Remainer, going so far as to call the Leavers in his party "extremists".

Leadsom dropped out after a media offensive against her for (benign) remarks about Theresa May’s childlessness. Her inability to form a coherent response to this relatively mild media spotlight, caused her support to waiver and undermined her Prime Minsterial image, although by this point she merely needed to win the membership, who could well have backed her for her stance on Brexit alone. I don’t know why she withdrew. Perhaps she simply couldn’t take it, perhaps she was an intentional spoiler candidate.

For reference, here are some relevant paragraphs from a Huffington Post article on events. All the big news outlets had a consistent description of events.

The most important paragraphs say:

Davis made clear to the PM last Monday that he was “not happy” at leaks that she was to revive the soft Brexit option. Incredibly, he first found out about the details of the new scheme on Tuesday afternoon, after the BBC had been briefed on them for that morning’s Today programme.

“There’s an important constitutional point here,” one ally said. “An unelected civil servant has been used to bypass the party, Parliament and the Cabinet strategy and negotiations committee. The Cabinet Office ‘Europe Unit’ seems to be running the show. Even Tony Blair at least paid lip service to Cabinet Government.

The source continued: “We had a situation where the Foreign Secretary was only given a big thick folder on the Brexit white paper on 2pm, the day before the Chequers meeting to discuss it.” 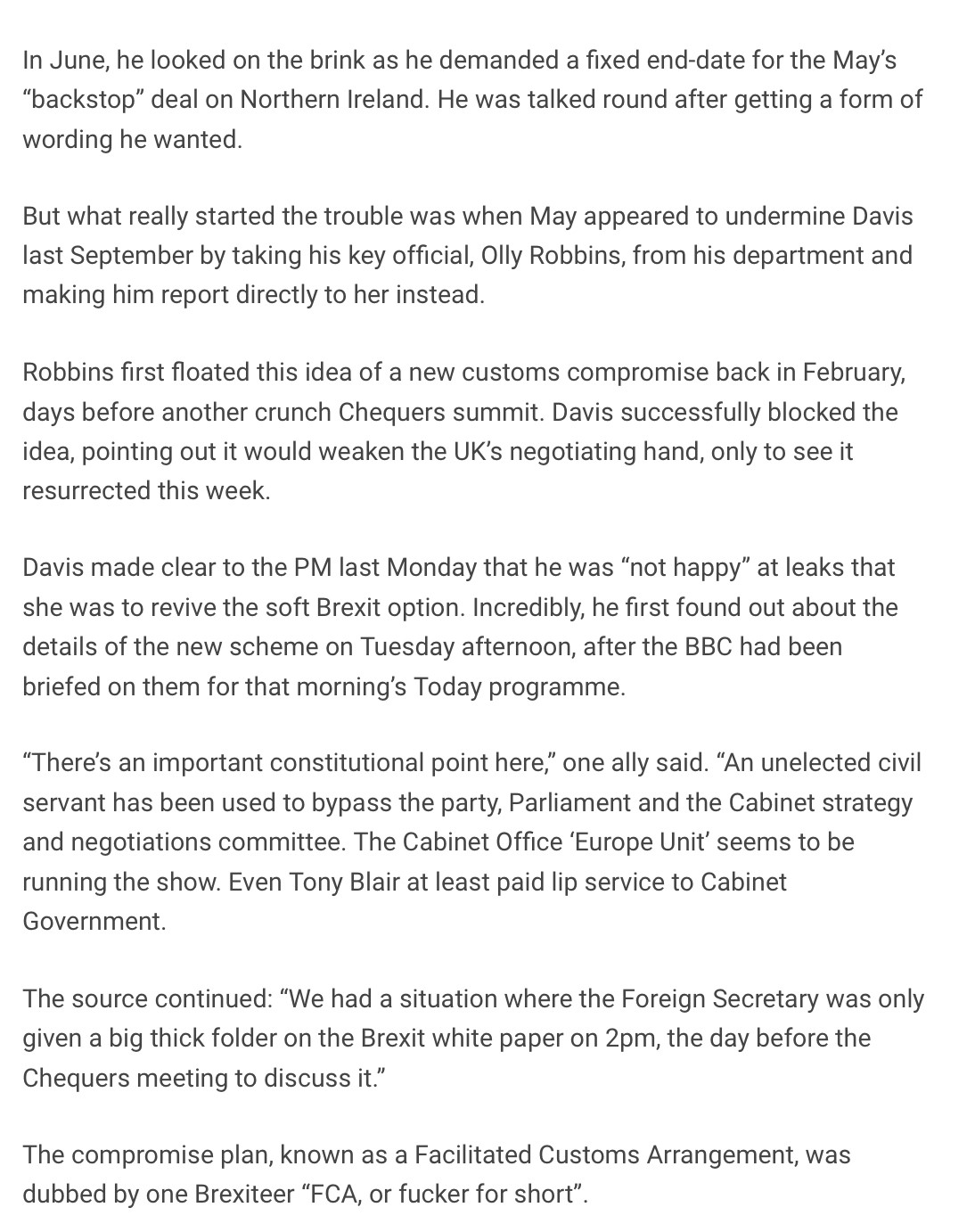 111
What are the main reasons for why negotiating a proper Brexit deal has been so hard?

4
Who was on Brexit's side?
32
Why doesn't Theresa May sack hard-Brexiteers from cabinet?
6
Which UK politicians claimed that German car makers would ensure a good Brexit deal for the UK?
1
What exactly did the Brexit Party gain in the 2019 EU parliament election?
15
Why is Boris Johnson visiting only Paris & Berlin if every member of the EU needs to agree on a withdrawal deal?
10
According to UK government, Parliament cannot stop a no-deal Brexit: Could this also be used to push through the agreement agreed by Theresa May?