Has the U.S. Postal Service ever suspended services for a “National Day of Mourning” before?

As some might know—or not know—the U.S. Postal Service is observing the national day of mourning that President Trump has declared on December 5, 2018 in honor of the passing of former U.S. President George H. W. Bush’s.

To honor the life and legacy of President Bush, the Postal Service will observe the national day of mourning.

While declaring a national day of mourning doesn’t seem odd, the U.S. Postal Service observing it like this in the middle of the Holiday season seems odd.

Is there any historical precedent to the U.S. Postal Service suspending service like this in the past? I don’t recall this happening when Ronald Reagan passed away in 2004? 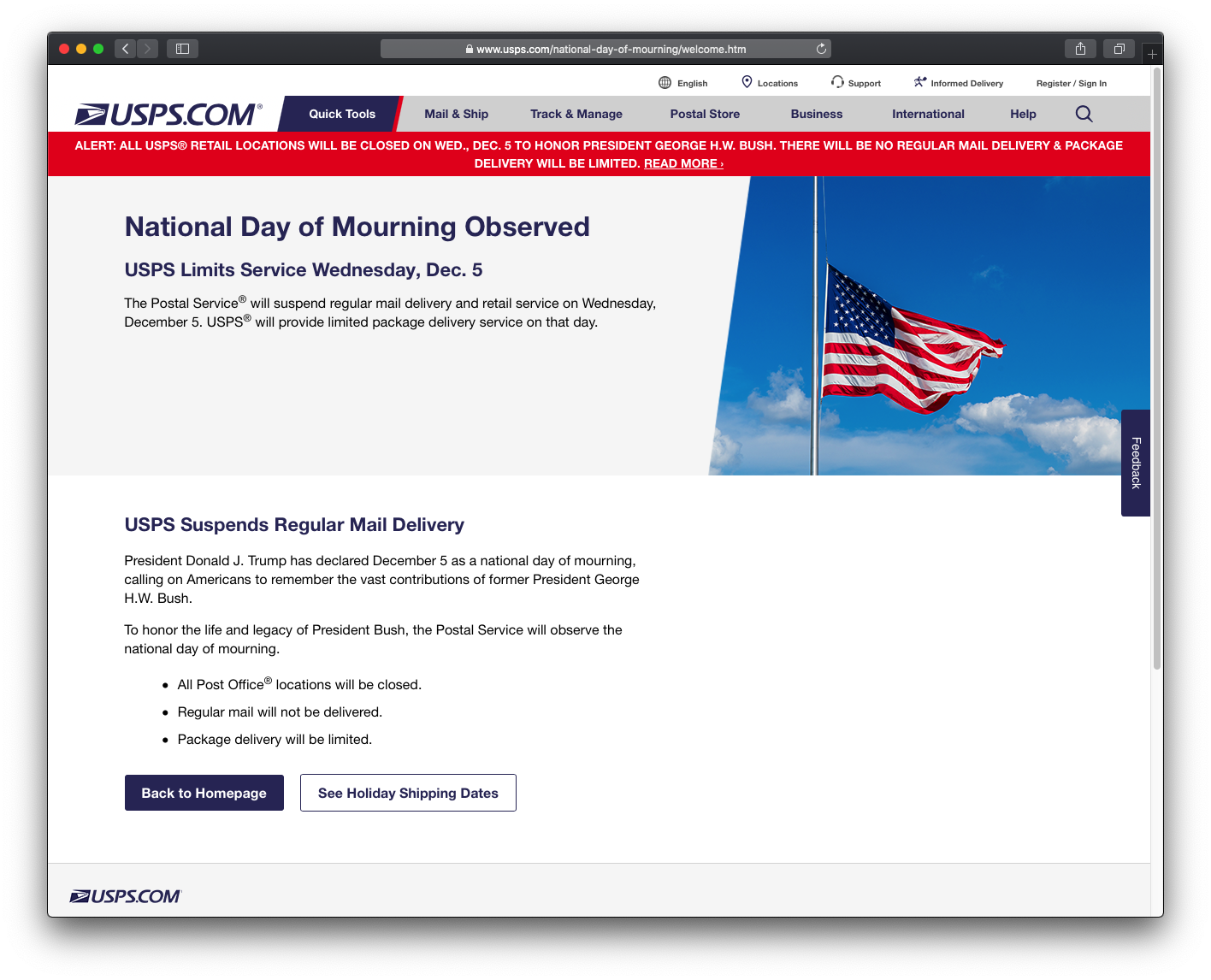 Yes. Since the State Funeral for President John F. Kennedy and for every former President following (with exception to Nixon) a National Day of Mourning is Declared for the day of the funeral (or public funeral if the ceremony will conclude privately). Federal Government Employees are given the day off as if it is a Federal Holiday as part of the National Day of Mourning (for an number of reasons, most notably that most offices are in D.C. area, which is notoriously congested on days where the city is not beset by a host of international leaders who will attend the services. Additionally, many employees at various agencies and sitting politicians in all branches are also going to be attending creating a lot of management leave situations). As Post Office employees are Federal Employees, they have received off for every Presidential Funeral save Nixon (I'm going to get there, hang on).

While the Thanksgiving To Christmas period is the busiest time of the year for the Post Office, the week prior to Christmas is typically the busiest time of time in this period with December 19 being the single busiest day of the entire year (Traditionally it is the last day one can ship a package and ensure it arrives at it's destination in time to be under the tree on Christmas Day.). Suffice to say, like many of government officials who represent them, Americans will not do anything until the last possible minute.

As noted twice, Nixon did not get these honors. As a personal request in his will, Nixon declined a State Funeral given the nature of his presidency to the nation. He was entitled to a State Funeral and would have received one if he so wished. As he declined the offer, many of the honors were not given (though there were some traditions that could not die from the formal service) including the Day of Mourning for Federal Employees that all other Presidents received.

And yes, Reagan received the honor of a Federal Holiday in his memory, but his funeral was 14 years ago... the mail not coming on one day is not something one would typically recall. It was widely reported at the time, eg. CNN reported:

Services will take place on both coasts and span five days

[...] President Bush ordered flags lowered to half-staff for 30 days Sunday and called a national day of mourning for Friday, when a state funeral for Reagan is scheduled in Washington.

Federal departments and agencies will close for the day, except those dealing with national security or essential services, under Bush's executive order.

The US Postal Service is not mentioned explicitly, but it is a federal agency, and was likewise closed. There is even an official USPS National Day of Mourning Policy, indicating this is not the first time. US Postal Service even cites George W. Bush declaring a national day of mourning on January 2, 2007 for Gerald Ford who passed away on December 26, 2006.

8
What does it mean to declare a national emergency under the Stafford Act or the Public Health Services Act?
6
Wrongfully influencing a private entity’s employment decision/practice, Is this law being violated?
2
Have the USA ever suspended visa services in any NATO state before Turkey?
4
Did the current US administration express a position about national emergency state extension?
5
Are there some systematic attempts to evaluate how pro-Christian-Right presidential policies have been?
1
Does a (US) presidential proclamation have a time limit?
2
Did US vice president Pence say anything close to “by any means necessary”?
1
When I register for voting in Massachusets with a telephone number on the “Do Not Call” registry, do I have to check the “unlisted phone number” box?
8
What power does Congress have against acting administration officials?
22
Do former US presidents have the right to receive daily CIA briefings?