What is the relationship between age and political ideology?

This question asked whether the current distribution of ages within each political party is similar to the past. This leads to a more general question: what is the relationship between age and political ideology?

"Classic (that is, old) works of political science definitely supposed that some relationship existed. For example, Glenn (1974) summarized some key arguments from his day:

In more current research, what is believed to be the relationship between age and political ideology? Is there any? If so, why?

As I indicated in my answer to the question linked, research suggests that political affiliations are imprinted at a young age and relatively static thereafter.

Now, that is speaking about whole demographics, not individuals. Individuals' beliefs will likely be a product of their circumstances. If we look at, for instance, the members of the Supreme Court, evidence suggests they get more liberal as they age. 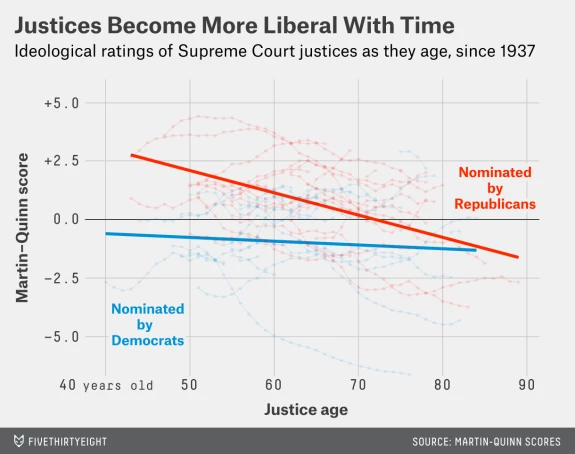 Most research e.g. summarized by Cornelis et al. (2009) suggests that most people become more conservative as they age:

The case of US justices highlighted in another answer thus might not be representative of the population at large. But you also have to keep in mind that most such studies are cross-sectional, which simply means that older people are more conservative than than younger ones at a given point in time. Longitudinal studies are fewer in number. 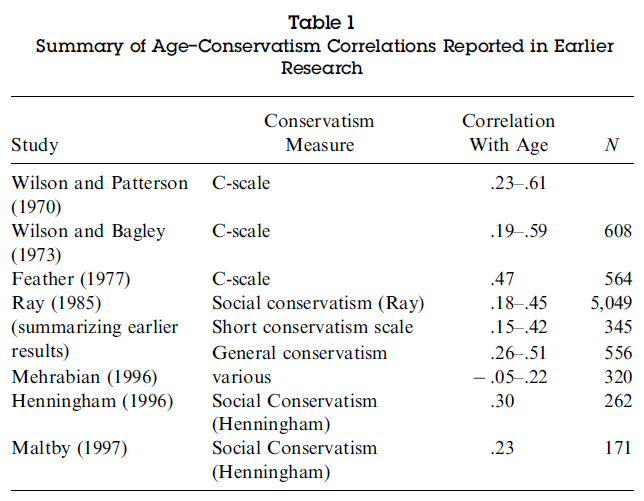 The study of Cornelis et al. (conducted in Poland and Belgium) also found support for this linear relationship of conservatism with age, but a very limited quadratic effect. Their explanation is that Openness to Experience (a Big Five personality factor) decreases with age. Additionally they found a more obscure personality factor, namely Need for Closure to be another explanatory link.

Need for Closure (Kruglanski & Webster, 1996; Webster & Kruglanski, 1994) refers to the desire or need for any firm belief or answer, as opposed to further sustaining ambiguity.

The value categories measured by the ESS [European Social Survey] are the following: conservative values (tradition, conformity and security), openness to change values (self-direction, hedonism and stimulation), self-transcendent values (universalism, benevolence) and self-enhancement values (power, achievement). Of the ten lower order values, tradition shows the strongest positive relation with adult age, while the value of stimulation shows the strongest negative relation with age. With regards to the four higher order value categories, conservative values increased across age groups, while openness to change values decreased. Neither of these value types showed cohort or gender differences. [...] Age effects on the four higher order value types were replicated across all 12 countries in the sample

As you'd expect, political views are malleable and subject to radical change much more often before adulthood.

True case studies have been scarce in the last 10-15 years, but simple correlation surveys have been fairly clear: Millennials and Gen X are actually getting more liberal over time. When you get into the details, though, it's a bit more complicated, as the rise of the alt-Right seems to also be tied to younger generations, though not at the same rate as liberalism.

Not the answer you're looking for? Browse other questions tagged political-theory ideology .

13
Is the current age-party affiliation breakdown in the US comparable to historic US breakdowns?