Is there an optimal size of a parliament?

Are there any studies that have been done correlating size of the electorate (or in general the population) to size of parliament and stability criteria? I was wondering which size of a parliament is scientifically deemed adequate.

I could not find any data on votes required per seat in national parliaments in relation to how well they are accepted and how stable they are. Does anybody have data to give at least a ball-park number on how many voters should be represented by one member of parliament?

Although the original concept is older, the modern version was established by Rein Taagapera (1973), an Estonian political scientist whose work focused on modeling legislatures. This theory comes up frequently both in academic and general interest circles. Recently Jacobs and Otjes (2014) examined it from several different angles with interesting results.

You can see the empirical evidence in a graph here. 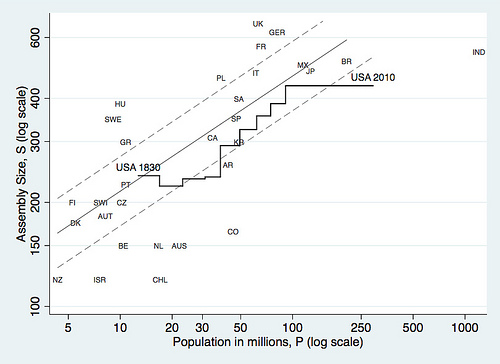 If parliament seats would be selected by lot from the population, the optimal size could be calculated like a sample size. Interestingly the sample size for populations > 1 million is basically a constant depending only on the required confidence level and margin of error.

For example if you want to be confident that in 95% of the decisions the parliament represents the will of the people within an error margin of 5%, the sample size formula suggest a parliament size of 384 people (for a population > 1 million).

Turning the reasoning around, if the European Parliament with 751 seats would be selected by lot, from the sample size formula we could see, that in 95% of the cases the will of the european people would be represented with a margin of error of about 3.5 %. 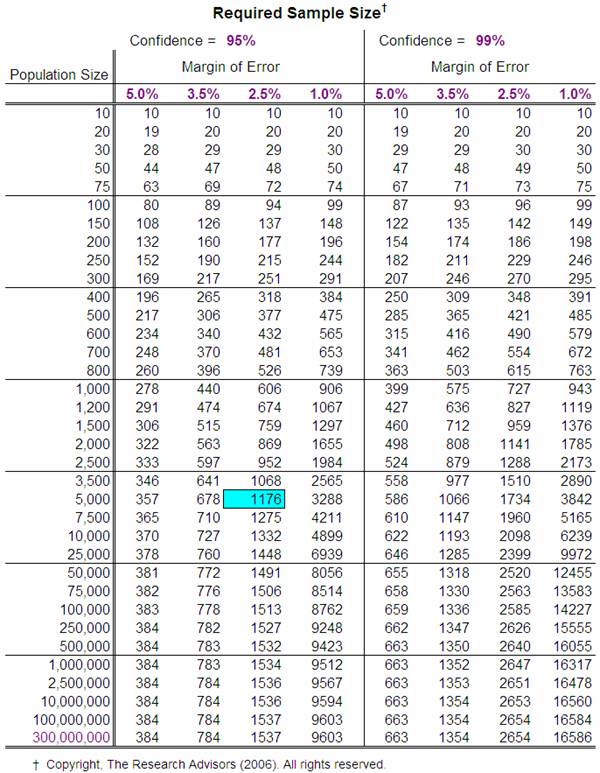 I ran across a study that attempts to deal with idea legislature size in basic way. Check it out: http://www.voxeu.org/article/optimal-number-representatives-democracy

Also, here's a more thorough answer to your question explaining in effect that until now there are no good answers: http://aceproject.org/electoral-advice/archive/questions/replies/760379812

I think that on the whole, no one is going to attempt to calculate an optimal legislature size, but what people will do is figure out that if you change a legislature to become bigger or smaller, certain phenomena will either be muted or amplified. For example, there is evidence that legislatures become more accurately representative as they get bigger (with especially important benefits for smaller and more typically marginalized groups). At the same time, a study by Gilligan and Matasusaka (Public Choice Principles of Redistricting) suggests that larger assemblies end up spending more money because there are more members attempting to bring pork home to their constituents.

You might want to check this recent publication (preprint)

One way to evaluate the question is to look at the dynamics of how different sized bodies operate, and then to decide, on whatever criteria one would like, what is best.

Generally speaking, the larger the deliberative body, the most power ends up vesting in the leadership group, and the less power ends up in rank and file members. For example, in the U.S. House of Representatives, the House leadership, the committee chairs and the Rules committee control proceedings tightly, and members of the minority and members of the majority's rank and file have very little power.

Similarly, in the U.K.'s very large House of Commons, almost all power is vested in the cabinet chosen from senior members of the majority party, while "backbenchers" attend to minor, almost clerical details of legislative drafting and participate now and then in debate on the floor when they have the opportunity to do so. But, most individual MPs have little power. The Speaker's power to control debate, which is necessary, further limits the power of rank and file members.

But, in a large body, it is far less likely that everyone will overlook any key detail of legislation, because even subcommittees are quite large and have relatively modest amounts of legislation to consider relative to the number of legislators charged with reviewing it.

In contrast, in a smaller deliberative body, such as Colorado's state senate with 35 members, almost every member of the majority holds some committee chairmanship or leadership post affording that member considerable power in some particular subject matter area, committees are relativity small affording every member of any committee considerable power, and the cost of even a small number of defections from a bill that the party supports makes catering to each individual member's wishes critical for management of the body. Members all know each other on a face to face basis and the interpersonal relationships can sometimes reduce partisanship and make for relatively expeditious consideration of legislation even at a fairly deliberative pace. Most floor debate can proceed with only perfunctory attention to formal rules of procedure.

As numbers growth, the character of the body goes from one extreme to the other.

33
Why is the new German parliament 12 % bigger?
6
Is there a recommended number of representatives in European democratic countries?

3
Does a quorum to enter parliament guarantee government stability?
1
Suppose somebody has won the majority in the parliament, he wants to select his cabinet
20
Are there examples of when Parliament decided against the results of a Referendum?
15
Has there ever been a situation in a modern Westminster parliament where there have been more independents than members of the second largest party?
9
Are there any other entities, apart from Flanders, whose parliament and government are located outside its territory?
3
What is the largest number of parties that ever entered a parliament in a general election?
11
Have there ever been Members of Parliament who weren't UK citizens?
3
Are there reoccurring taunts or put downs within UK Parliament?
0
Is there a country with a bipartisan Parliament formed in a proportional election?