What is the relationship between government expenditure and the quality of life?

Can we say, in general, what is the relationship between relative government expenditure (or the total taxation) and the average quality of life?

Triggered by the somewhat arbitrary selection of countries in the OECD graph in Bobson's answer, I found that data are easily available for much more countries than just the OECD countries. 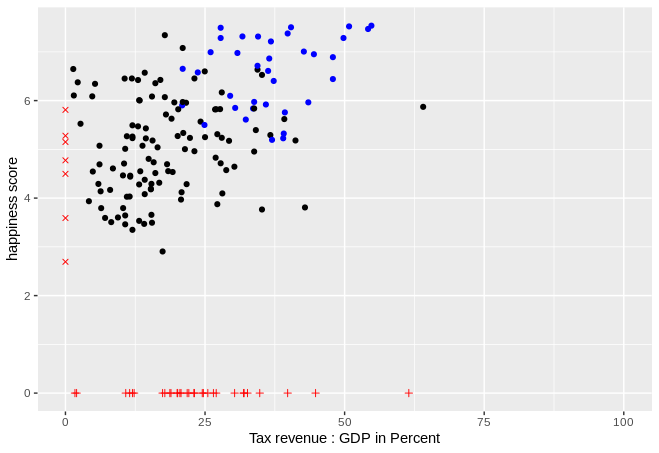 With the unaided eye, I'd say that there's a maybe lower line of very roughly 1.75 happiness points + 9 ⋅ total tax revenue/GDP. Very few countries are below that: 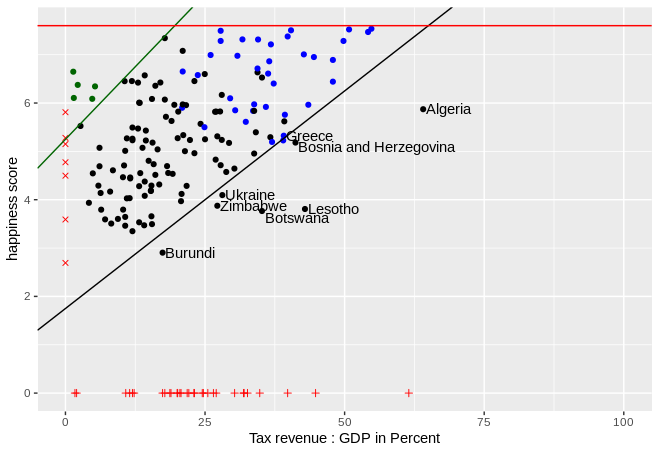 There may or may not be a similar upper limit as well at roughly 5.25 happiness points + 12 ⋅ total tax revenue/GDP (dark green line).
The five (dark green dots) countries above are the United Arab Emirates, Bahrain, Qatar, Kuwait and Saudi Arabia, i.e. the rich Arab oil countries that probably use lots of oil sales revenue instead of taxes.

And, anyways, even the most happy countries so far do not manage to get a happiness score of more than 7.6 (red line).

If I do a linear regression of happiness score over Tax revenue : GDP ratio for all countries where both happiness and tax revenue are available, I get the following picture: 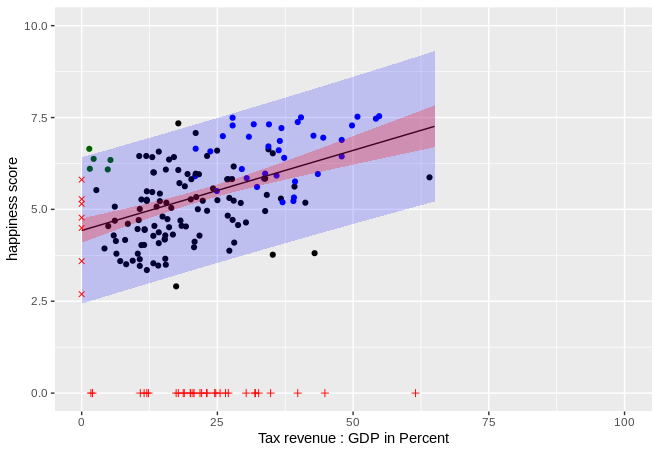 Regression formula is 4.425 happiness score + 4.36 ⋅ total tax revenue/GDP. Both intercept and slope are highly significant*, and the corresponding 95 % confidence interval for the regression line is the reddish shaded area in the graph. However, knowing that on average over almost 150 countries happiness correlates with tax revenue to GDP ratio (correlation coefficient is, btw, 0.49) doesn't help us saying anything about a single country. For that, we'd need to look at the prediction intervals (blue shaded area).

That tells us that for a generic country with 25 % of GDP going into taxes, we'd expect a happiness score somewhere between 3.5 and 7.4 (95 % prediction interval). Happiness score of 3.5 is what Guinea, Liberia and Togo in West Africa have (Syria is 3.46). 7.4 basically scatches the very top we actually have anywhere worldwide, it is between the Netherlands and Finland (topmost was Norway with 7.54). In other words, we'd expect it to avoid being one of the 6 most miserable countries, and also not to make it into the top 5 countries. Seeing that this is the 95 % prediction interval, so we'd expect about 5 % of such countries to be outside that range we just calculated. In summary, the variation between countries with similar tax to GDP ratio dominates.

Analyzing comparative government policies is hard, since there's no way to have a control group or rigorous studies. All political scientists can do is analyze reported data and try to tease out correlations.

On this subject (as would be expected) there is no definitive answer, but it has been researched. For example, here is one article which discusses it, based on The Political Economy of Human Happiness by Benjamin Radcliff.

Indeed, the evidence assessed by Radcliff suggests [a link between government spending and happiness]. His data shows that for one of the metrics, linked to welfare spending, countries scoring high on this indicator, happiness levels are above one point higher than low-scoring countries. He suggests that this contribution to happiness is double that of being married (being married is positively correlated with happiness), and three times the negative drag of unemployment.

However, it also includes this graph, which shows a very weak correlation: 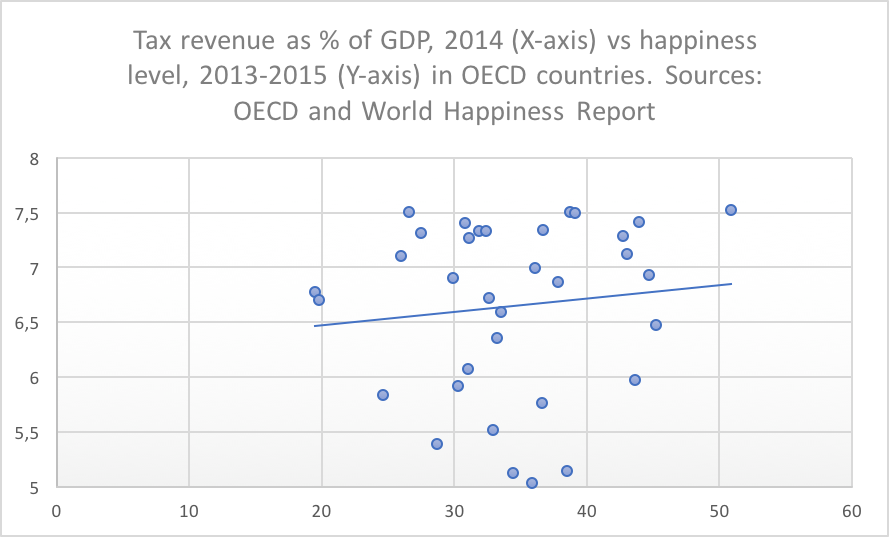 But not all others things are equal: the distribution is broad and the effects are very diverse. Denmark is on the top right with a happiness level of 7.526 and the very highest tax level of 50,9. On the far left, we find Switzerland with a marginally lower happiness level of 7.509 and only half the tax rate at 26.6%. On the lowest part of the graph, with happiness levels just above 5 points, we find Portugal, Greece and Hungary, with taxation levels around 34-38%.

So there is research on the subject, but no definitive relationship.

Taxation for most people is giving what they need (their money) and in return largely receiving what they do not need. If anything the more government spends, the lower quality of life a people will have.

Not the answer you're looking for? Browse other questions tagged political-theory taxes reference-request inequality .