Perhaps a better title of this question would be, why competition among states and different cultural preferences among people in many states do not make more states try legalizing safe soft drugs?

Imagine if I have a business. Imagine if I believe falsely, that hiring LSD user people is bad. Someone else that doesn't share my believe will hire LSD users anyway. If it turns out that my beliefs are false, then I will be outcompeted. My fellow businessmen that hire drug users will be rich.

In fact, I've heard that many companies in Silicon Valley (please confirm this) don't even bother doing drug tests. There is a hidden secret that drug users are better programmers. Businesses, wanting profit, then turn a blind eyes.

Here is some articles https://news.ycombinator.com/item?id=4720121

Companies in labor-intensive industries — hoteliers and home health care providers and employers with many warehouse and assembly jobs — are most likely to drop marijuana testing. By contrast, businesses that contract with the government or that are in regulated industries, like air travel, or that have safety concerns involving machinery, are continuing marijuana tests, employment lawyers say. Federal regulations require the testing of pilots, train operators and other key transportation workers.

So different businesses test for ganja correctly based on whether it is safe for the companies or not.

However, if LSD users turn out to be great programmers, most businesses will just hire them and don't bother testing for drugs.

False beliefs rarely survive competition. Western Europe become advance because their countries compete with one another. When Magellan want to travel around the world and rejected by one country, he just ask for another country to allow him.

That means, if a drug is harmless, whoever have power on those states will make tons of profit by taxing it. They get benefits of tax without all the harms that come out of the drug.

May be it's true. May be legalizing soft drugs are dangerous. May be it can cause more terrorism or civil war. However, it's not even tried.

Why almost no state are willing to try legalizing most soft drugs?

Why no state "try" okay let me try legalize MDMA. Oh it turns out I got tax revenue and no body dies, as expected.

And yet people criminalize anyway. 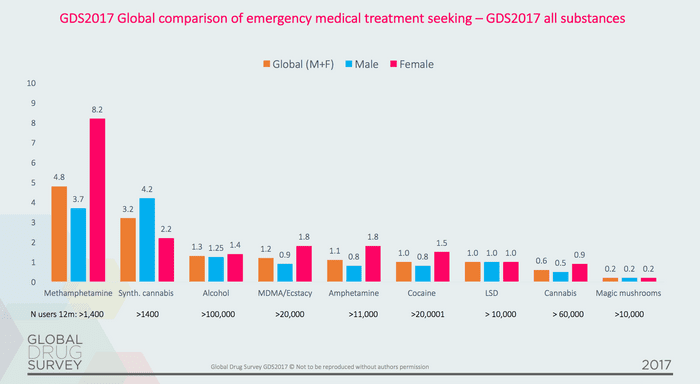 Here is a graph 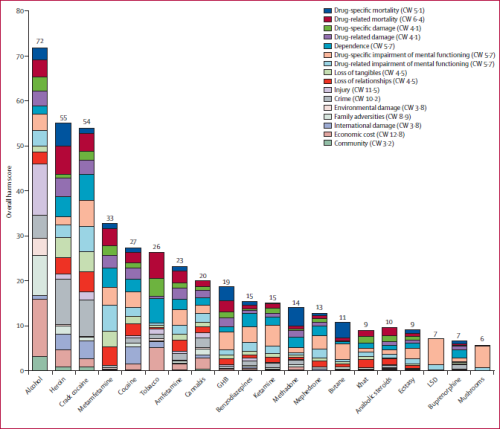 Most drugs are much saver than alcohol. Yet so many states choose to ban them even though they can make so much money taxing them instead. When people behave unselfishly, I am puzzled.

There are like 10 death per year in UK and about 20 million users.

Most drug users are not addicts https://theconversation.com/many-people-use-drugs-but-heres-why-most-dont-become-addicts-35504

So it just baffles me.

The states can make tons of money legalizing drugs and taxing them.

Yet most states don't and they don't even try. If only one state or province try, then all drug users will simply move to that state. We'll see if that one state that legalize get more prosperous or not.

In fact it happened though very slowly. If we see the effect, I can see that some people may still not like it. However, humans are diverse. How can out of so many states and countries, very few willing to try legalizing and taxing drugs?

One says that US government pressure other states to prohibit drugs. Is this even true?

I may be wrong. May be those drugs, like ganja are indeed dangerous. However, is this the reason? Are there any other explanation why most states keep safe soft drugs illegal?

Are they doing it so they so some officials can rake in tons of money? What?

It seems to be very profitable for voters to tax soft drugs than to prohibit them.

Note: Somewhat similar questions would be, why many states before world war 2 didn't accept jewish immigrants. If jews are productive, there should be no problem. Another thing would be, why tax income if you can more effectively tax land? Again profit can jump to another country, land cannot. Yet most states tax income. It's as if there is a centralized authority telling those states, "prohibit soft drugs", "don't accept jewish immigrants", "tax income". However, there is no sovereign over sovereigns. States are all powerful. The states are effectively libertarian to each other. Each can do what they want. Yet, they, in tandem, seem to choose inefficient solutions like prohibiting soft drugs or taxing income. One explanation is I am just death wrong. Soft drugs are actually harmful, income taxes are actually good, and jews are actually evil. However, it doesn't look that way to me. Scientists tend to agree with me.

And yes. They work in tandem. Before, no states prohibit ganja. Then US did it and then other states follow. Is US like emperor or what? Many states just flip the finger when US asks something. Yet, for drug, they all suddenly agree that most soft drugs are dangerous despite scientific evidences to the contrary.

Even if it were true that soft drugs are actually harmful, I would expect normal diversity among cultures to have say, 10% of states legalizing it. Yet it doesn't happen.

This can be answered by looking at the history of drug prohibition in the US. It arose as a consequence of the repeal of alcohol prohibition. You had a large body of law enforcement personnel who no longer had anything to enforce, and who therefore would be unemployed. So they came up with the idea of making marijuana and other drugs illegal in order to secure their continued employment. See for instance the history surrounding "Reefer Madness".

So you now have an industry - police, courts, prisons, &c - involved in and making a profit from the prohibition of drugs. As with any industry, the people involved want their industry, and their own profits from it, to grow, so they support more prohibition, harsher prison sentences, confiscatory laws...

Along with this, politicians discover that they can use the drug-using outgroups as scapegoats, especially when (as in the 1960s) those groups generally support non-mainstream political & social views. E.g. slogans like "Make Love, Not War" and "Tune In, Turn On, Drop Out".

TL;DR because of the Matthew Effect

Once a substance acquires an illicit reputation (deserved or otherwise) people who are reputable and would otherwise be recreational users move on to other drugs, people who want to send countercultural signals start conspicuously consuming, and the cycle accelerates until it bottoms out in a (possibly illogical) stable equilibrium.

At this point, because of the signaling implications, it's no longer politically viable to even verbally support the substance, much less try to introduce legislative changes.

It takes generations for those cultural attitudes to gradually fade and shift, and logic has only a mild correlation with whether or not something falls within the Overton Window.

I just want to add that the premise behind my question turns out not to be too true.

What's interesting is that Myanmar has plenty or "rebels". And governments want peace with those rebels.

Surely enough those rebels see the obvious. In their own region they legalize most drugs.

Vice is a good way to make money and anyone in power in a country will want to profit from it one way or another.

It seems that in democracies, those in power profit from drugs by lying to the people. The people being stupid demand criminalization no matter what the evidence. Those in power are then selling it themselves.

However, those who want to sell drugs to tourists would need to be more open about it and legalize it more openly.

Not the answer you're looking for? Browse other questions tagged drugs .

2
Why did cannabis get legalized first?
-3
Why are many safe narcotics illegal?
4
Does the US "coerce" other countries to criminalize many drugs?

5
Now that marijuana is legal in several countries, do any states plan to legalize further drugs?
8
Why is Medicare/Medicaid prohibited from bargaining for price in US?
12
Why didn't Canada leave the UN conventions on illicit drugs before legalizing marijuana?
4
Does the US "coerce" other countries to criminalize many drugs?
2
Why did cannabis get legalized first?