Does the US "coerce" other countries to criminalize many drugs?

A comment on a question about taxing and legalizing soft drugs explains that the US may have used its political and economic clouts to force other countries to ban narcotics.

I find that hard to believe because most countries, including the US, usually respect each others' sovereignty, unless under unusual circumstances.

However, I also do not know any other reasonable explanation.

Most of the drugs are not harmful enough, at least according to science. There is huge cultural diversity and different interests among states make it hard to imagine not even 5% of countries in the world try legalizing it. Also, there are huge benefits to be gained when taxing instead of criminalizing drugs.

The only reasonable explanation is that we have a world government forcing countries to enforce it.

But why? If the US were that powerful, China would have been a democracy. Did the US coerce other countries into criminalizing drugs? If so, how?

The US has a Drug Enforcement Agency which is tasked with the following (emphasis is mine):

To accomplish that mission, the USA has over 750 DEA employees working in 59 other countries. That report by the Office of the Inspector General also contains the following:

According to a DEA headquarters official, the agency is constantly asked by foreign governments to open offices in other countries. However, the DEA only opens offices in countries that are in some way tied to the flow of illegal drugs into the United States.

Based on that, it seems the US (at least when it comes to the DEA) is mostly concerned with protecting its own interests and other countries are eager to work with them (rather than the US forcing them to cooperate).

This is a really difficult hypothesis to test because of the numerous confounders. Just arguing from incentives: once the US criminalizes some drug, it obviously has an incentive to make other countries follow suit, but...

The US efforts will be proportional to how much the criminalized drug comes from abroad. A recent example would be China and fentanyl.

Beijing first agreed to make all variations of fentanyl a controlled substance during trade talks between Trump and Xi in early December on the sidelines of the G20 summit in Argentina.

The primary purpose of the meeting was to avoid further escalations in the raging trade war between Washington and Beijing, which has seen billions of dollars of tariffs placed on US and Chinese goods.

The announcement of a starting date for the new laws comes amid ongoing trade talks between the two countries, which have raised hopes of a potential deal to lift tariffs and ease tensions. Chinese officials declined to link the two issues at Monday's press conference.

If there's substantial opposition inside the US for the criminalization of some drug, e.g. marijuana, then the US will do little to try to impose its views elsewhere, for example in the case of Canada or Uruguay. Even more so if US imports of said drug are negligible in contrast to its domestic production.

Countries such as the United States have historically wielded their political influence and power to encourage full implementation of the drug treaties. However, with Uruguay’s law entering its fifth year since passage, there has not been a concerted U.S. government effort to punish Uruguay bilaterally or in an international arena, suggesting that Uruguay’s reforms will not be stymied because of international pressures. In this regard, Uruguay has taken advantage of felicitous timing, with its law’s passage having come in the midst of a major shift toward cannabis regulation within the United States. After the November 2012 ballot initiatives to legalize cannabis in the states of Colorado and Washington, U.S. President Barack Obama’s administration adopted a policy of conditional accommodation of state-level cannabis legalization, contained in Justice Department enforcement guidance known as the “Cole Memo.” This accommodation provided Uruguay a political cushion internationally, just as the Uruguayan parliament was preparing to approve the country’s cannabis reform. In the wake of the Colorado and Washington ballot initiatives, the U.S. federal government was suddenly in an awkward spot. The United States was the key architect and for decades the chief enforcer of the UN drug treaties, including vigorous enforcement of the global prohibition on non-medical uses of cannabis. To oppose Uruguay’s new law or even pressure Uruguay to revise or annul it—as it is easy to imagine previous administrations attempting to do so—would open the United States to charges of hypocrisy.

That should also hint you that there are memetic political culture forces at play worldwide. If some country argues a drug is bad for its citizens, there will be politicians in other countries that will argue the same (either because of scientific data or just because of some "moral standards") regardless of external political pressure. But it's really hard to disentangle coercion from copying. Note that unlike fentanyl, China banned opium all by itself. Also note, that in the EU at least, most NPS (new psychoactive substances) banning laws have resorted to explicit harms-related criteria for their bans, since coming up with an exhaustive list of drugs turned out to be on the losing side of the battle: 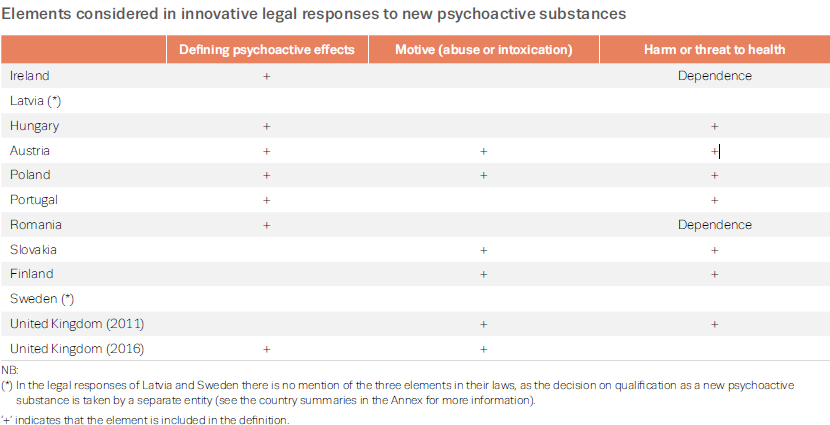 But at least some of these countries also have an agency entrusted with drawing up a list based on those principles (as a practical shortcut):

The US also has had for quite a while a Federal Analogue Act. But there's a lot less worldwide harmonization in this area (NPS), list-wise, than on the (fewer) drugs explicitly listed by the UN conventions. The Wikipedia article on the UN Single Convention has a good historical background how countries were divided according to their incentives during the negotiations. The US was among the group of countries

Having no cultural affinity for organic drug use and being faced with the effects that drug abuse was having on their citizens, they advocated very stringent controls on the production of organic raw materials and on illicit trafficking. As the principal manufacturers of synthetic psychotropics, and backed by a determined industry lobby, they forcefully opposed undue restrictions on medical research or the production and distribution of manufactured drugs. They favored strong supranational control bodies as long as they continued to exercise de facto control over such bodies. According to W.B. McAllister's Drug Diplomacy in the Twentieth Century, their strategy was essentially to "shift as much of the regulatory burden as possible to the raw-material-producing states while retaining as much of their own freedom as possible."

The conference convened on 11 January 1971. Nations split into two rival factions, based on their interests. According to a Senate of Canada report, "One group included mostly developed nations with powerful pharmaceutical industries and active psychotropics markets . . . The other group consisted of developing states...with few psychotropic manufacturing facilities".[6] The organic drugmaking states that had suffered economically from the Single Convention's restrictions on cannabis, coca, and opium, fought for tough regulations on synthetic drugs. The synthetic drug-producing states opposed those restrictions. Ultimately, the developing states' lobbying power was no match for the powerful pharmaceutical industry's, and the international regulations that emerged at the conference's close on 21 February were considerably weaker than those of the Single Convention.

Some the hardline-ness of the US policy depended, rather predictably, on whether they made the drugs in question or not. Keep in mind that the conventions separate drugs in schedules, with various degrees of control and enforcement.

I don't know that much about the pressure the US exerted to force other countries to adhere to their policy on drugs, but I can provide some general information:

There is an idea that parts of Latin America have - in their opinion unnecessarily - turned into a battleground for America's war on drugs - with Mexico and Colombia particularly affected. If these countries legalized the cultivation of the plants that are grown to produce drugs as well as their export, all problems would disappear: Planting coca would become as normal as growing potatoes, there would no longer be any drug cartels fighting each other or the police (at least not in their country), and much less political corruption. The US war on drugs would have to be fought in the US as this is the place of any illegal activity (and where it belongs - according to this argument).

Would such a drug policy be realistic? Is the current policy only maintained due to persistent foreign coercion? (IMHO, there isn't such an easy escape. I don't think that any country would want such dangerous drugs to be easily available to its citizens.)

One country has openly and successfully resisted American coercion: Bolivia. The Bolivian president Evo Morales had presided a syndicate of indigeneous cocaleros (coca growers). The coca plant is traditionally cultivated in this Andean region. People are chewing on the leaves or drinking a tea of coca. It gives energy or delays at least the appearance of fatigue, and has other positive effects (Many tourists - including myself when there - do the same as it is considered helpful to get accustomed to the high altitude and climate). While Morales had stated that he doesn't want Bolivia to be a supplier of cocaine, he continued to defend the cocaleros' way of life. This has led to some peculiar arrangements for the growth and commercialization of coca. Initially the US have been very hostile to Morales' coca policy, but it seems to work: The feared explosion of Bolivian cocaine production didn't happen, instead the cultivation of coca has even decreased.

Not the answer you're looking for? Browse other questions tagged united-states international-relations drugs .

6
Would legalization of drugs increase the power of the FARC?
5
Now that marijuana is legal in several countries, do any states plan to legalize further drugs?
1
Is the War on Drugs a declared war?
11
Has anyone attempted to quantify the effects of a full legalization of all drugs?
1
Does US have a national strategy to reduce Rx drugs consumption?
0
Have there been any referendums on legalizing the recreational sale of drugs other than marijuana?
22
Why does decriminalisation/legalisation not reduce the cost of drugs?