I am reading Democracy for Realists: Why Elections Do Not Produce Responsive Government. In Chapter 6 and 7, evidence is shown that "voters' retrospective assessments of the economy are quite myopic." For example, Chapter 7 looks at the landslide victory of Roosevelt in 1936 as a sort of case study, and shows (p191, emphasis mine):

Even in the remarkable circumstances prevailing in 1936, voters were focused on concrete economic conditions that they could see and feel when they went to the polls. Specifically, they were focused on income gains or losses over the course of the election year. Income growth earlier in Roosevelt's term, which contributed as much or more to their economic well-being, had no apparent electoral effect. That was water under the bridge. Roosevelt's reelection in 1936—and the New Deal realignment—depended crucially on a positive balance of answers to the question, "What have you done for us lately?"

They present a statistical analysis in support of this view, but I do not fully understand the presented data (likely due to my lack of knowledge about statistics).

Table 7.1 (p187), or similar results which are presented in Table 1 of Achen & Bartels (2004), uses "ordinary least squares regression parameter estimates" to indicate that "[in] every case, whereas election-year [1936] income growth has a strong positive effect on Roosevelt’s vote, previous income growth [1933-1935] has little or no effect."

It is my understanding (possibly wrong and the root of my confusion), that for them to be able to perform these statistics they would need to poll for the popular vote in the intermediate years between elections. If this were true, and with the explanation of myopic voting in mind, would you then not expect the popular vote to be higher due to recent income growth (at the time of the poll), similar to as is shown for 1936? Or, does 'myopic voting' for some reason only apply to election years?

The Hypothesis - No Need to Measure Off-Year Electoral Support

They do not attempt to measure electoral support in any year except 1936. Forgetting the statistics for a moment, they are using Roosevelt's 1936 re-election as a case study. They would like to explain why the percentage of people voting for Roosevelt in 1936 increased or decreased in certain states.

Their suggested explanation for these changes is that in areas where income rose in 1936 people voted for Roosevelt. Given this hypothesis there is no need to measure electoral support in off years.

However, they are concerned with showing that income growth in other years is less influential on voting in 1936. This is the core of the "myopic" part of "myopic voting". Other theories had suggested that voters were more rational and would consider their income growth across a politician's entire term. Bartels (et al.) are disputing this.

In order to accomplish this they need to measure income growth in 1933-1936. These are the potential causes they are evaluating. In their hypothesis (and their model) income growth in each year is compared to the 1936 election.

Here's a diagram showing this: 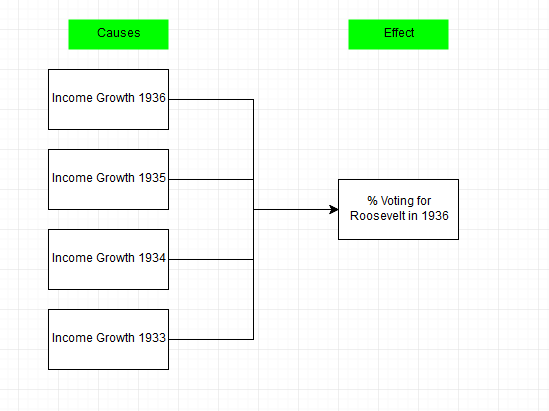 So, how about their statistical method? I don't have their data, so I'll take some figures from the Wikipedia article on regression to use as an example in this case.

They use linear regression. In a simple descriptive sense: if you plot your data in a scatter plot (so there are only 2 variables) linear regression is a technique for drawing the best line through that data.

The line tells you important stuff about your data. For example, if it goes up or down then you could say that there is a relationship between your variables. If the line is flat, there is no interesting relationship.

In the example below, the red dots are the data. The blue line is the "best" line through that data. What does it mean to be the "best" line? The mnemonic device from the stats classroom is BLUE - best, linear unbiased estimator. The blue line is expected to be unbiased: which means that it may not be right in all cases, but on average it is correct.

The next problem is how to decide whether the line is the best. The authors used "ordinary least squares" (OLS) for scoring lines. This is the way nearly all regression is done in practice. In OLS you measure the distance between every piece of data and the line (represented in green in the image). This is essentially the "error" of your prediction. Square the length of all the green lines and add them up. This is your regression line's score. OLS gives you a big penalty when a piece of data is far from the line and a small penalty when you are closer.

In short - linear regression gives you a good score when your line is close to the data.

The last step of their analysis is harder to visualize. In this example the data was two dimensional: one input and one output (or one cause and one effect). In practice there are typically many possible causes or inputs that are being evaluated. The process is pretty much the same, but it's hard to draw a figure requiring 3 or 4 dimensions.

Back to elections. In the Achen & Bartels book they started with two variables: a single cause (income growth in 1936) and one outcome (% voting for Roosevelt in 1936). They drew a line through the data to conclude whether there was any kind of correlation between these two variables. They concluded that there was.

Because some people thought that past years' income growth could be influencing voting choices in 1936 they added more potential causes, but they still only had a single outcome year to observe. By incorporating multiple potential causes they were able to conclude that the effects of income gains farther in the past had little to no additional effect on the 1936 vote. That is, voters appeared to be myopic in the sense that in 1936 they considered only their gains or losses in the last year, rather than in years past. 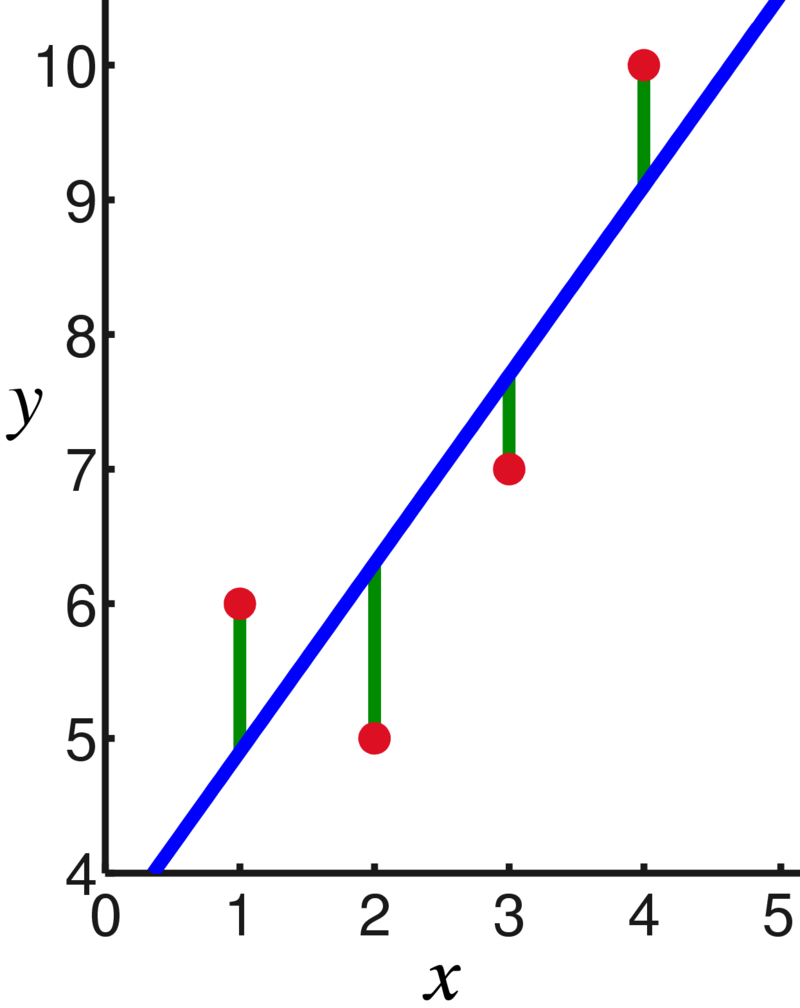 Not the answer you're looking for? Browse other questions tagged presidential-election voting statistics polling .

3
Has any president benefited in elections from partially repairing the economy after damaging it?

10
Is the "no poll reporting till voting is done" law specific to the Brexit vote?
7
What sort of evidence might Wisconsin require to NOT use a machine recount?
4
Is there evidence that phone polling led to people's votes being "outed"?
8
How do Voting Machines work?
6
Statistics of Instant Runoff Voting
3
A. B, C, or D statistical voting placement on ballot?
5
What states used voting equipment by Dominion Voting Systems for the 2020 election (if any)?
1
Where can New Mexico early voting statistics be obtained?
32
Is there objective proof that recent bills (1st half of 2021) that restrict voting are targeting Democratic voters specifically?