Could parts of the UK remain in the EU, and other parts leave?

In a letter to the editor of The New European, Alan Hause writes:

Technology is a wonderful thing. It can solve all sorts of seemingly impossible situations. So when Owen Paterson pops up on television earnestly arguing that modern, seamless techniques can overcome the Irish border problem, it sounds quite reasonable.

It's so convincing, I suggest the next time anyone hears this solution being offered that it is welcomed with open arms. Because this new invisible, seamless technology could also apply to Scotland, London, Manchester, Bristol, Brighton and all the heavily Remain-voting areas. It could cover about 48% of the population - direct democracy at work!

Would someone who understands the "seamless technology" being proposed for Ireland, please explain whether it could be applied to Scotland, London etc - with an invisible electronic border around the M25. With the highly efficient postcode system that the UK has, could it be made to work?

Would someone who understands the "seamless technology" being proposed for Ireland, please explain whether it could be applied to Scotland, London etc - with an invisible electronic border around the M25. With the highly efficient postcode system that the UK has, could it be made to work?

Alan Hause is being sarcastic in the text that OP quotes. Nobody actually understands the "seamless technology" Paterson was talking about, probably not even himself.

During a long time the UK government was pretending that a technological solution could solve the Irish border issue, but it never cared to explain it clearly. Like many other things, this was probably a political maneuver meant to dismiss the issue as negligible, or possibly wishful thinking.

The author of the text simply makes fun of the government: thanks to this magical "seamless technology", one can find all sorts of silly solutions for unsolvable problems.

I doubt dividing the UK by postcode into two distinct countries is a very serious option, though. But who knows...

Can parts of a country be inside the EU and other parts not?

Taking this question as written in the title, the answer is yes, and this is already the case.

They're called "Special overseas territories". This includes a number of places that are technically under British sovereignty but are not part of the EU such as the tax havens of Bermuda and the Cayman Islands. There are also special cases for the much closer islands of Man and the Channel Islands.

Finally there are places which are part of the EU as part of the UK's membership, but not part of the UK proper. If you read the actual text of the draft withdrawal agreements, they also cover "Gibraltar and the sovereign Cyprus base territories". These will also be leaving the EU under the current plan.

How large can such a special case be?

The Canary Islands (part of Spain, in Schengen but outside the VAT area) has a population of just over 2 million, larger than Northern Ireland.

Leaving NI inside the EU, VAT area, customs union, phytosanitary area, electricity market, etc. would be a very practical solution apart from the fact that the DUP hate it, because it would make NI 'closer' to the Republic than mainland Britain.

This doesn't require any magic, but all the cases involved are territorially quite isolated. Almost all of them are islands. That makes it very easy to enforce the controls that do exist.

Even if the UK were to dissolve (into Scotland and "the rest"), there is no way Scotland could "remain" in the EU. The best they could do is apply for membership, and it's likely to strand them. They're not likely to qualify in economic terms, but beside that, Spain is expected to veto such an application: just in case Catalonia would ever become independent, it does not want Catalonia to automatically become an EU member, so it doesn't want Scotland to set a precedent.

Or rather, doing that would turn the different parts of the UK into de-facto separate nations under a common head of state. The DUP got that right when they objected to a customs/regulatory border between NI and the rest of the UK.

Just imagine the EU bans a certain GM crop and the UK allows it, or vice versa. Would the border technology include laser guns to zap pollinating insects?

Back in the 19th century Germany was split into many small territories. It caused this politican cartoon: 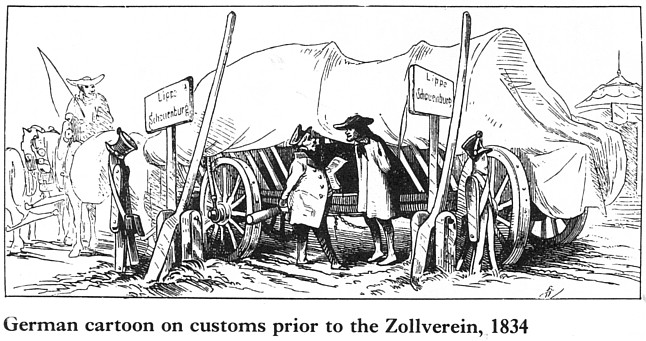 10
Could the City of London leave the EU while the UK remained?
42
Must the UK leave the EU?
15
Are there any other countries besides the UK that have movements to leave the EU?
5
What would change as far as political alignments if Scotland and/or NI leave the UK?
11
Could Gibraltar remain in the EU?
4
Could (in theory) the British government or some other British entity “neuter” the British MEPs before Brexit (Spring 2019)?
2
What does it mean to “leave the backstop”?
10
Was Leo Varadkar correct that polls have indicated a UK desire to remain in the EU?
11
Why is there a strong link between education and voting Remain?