Has there ever been a larger UK Parliamentary defeat than on Brexit tonight?

I have just watched, live, Theresa May lose the vote on her deal by an unprecedented margin, 432-202. Every UK news source is quoting that this is the largest ever defeat "in the democratic age", or "since the 1920s", or similar.

The Guardian, for example, has a handy infographic mapping numbers to length for the scale of this defeat by 230 (source): 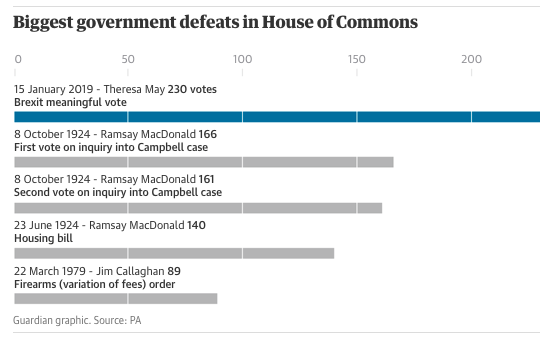 Has there ever been a defeat larger than this, before 1924? Why do the pundits draw the line at 1920 -- I presume because of the suffrage movement and the growth of the franchise during that period, but why does that alter the likely scale of political defeats in the Commons?

One of the more notable reasons to use 1918 as cut-off is that it represented a high water mark in the number of MPs in Westminster. The Parliament Act of 1911 also functionally altered the balance of power between the Commons and the House of Lords, which has made Commons defeats much more significant. Indeed more peers than commoners served as premier in the 19th century.

Making comparisons with other votes throws up some difficulties. Your title question is currently "Has there ever been a larger UK Parliamentary defeat than on Brexit tonight?". The majority was 230 votes. For comparison :

If you wish to limit yourself to defeats on government motions, the People's Budget was defeated on November 30th by 350 votes to 75 in the House of Lords in 1909. This parliamentary defeat (though not a Commons one) was the action which precipitated the Parliament act.

If you want to further limit yourself to Commons defeats, I'm not aware of any, however Hansard, the transcript of record on parliamentary business only lists the results all divisions since 1909, with a somewhat spottier record back to the point the British parliament became the UK one following union with Ireland. If you want to search yourself, I suggest you start here.

5
Are there any parliaments with more than two chambers?
6
Is there a fusion of powers in parliamentary regimes?
15
Have parliamentary democracies been known to engage in “repeal wars” after elections?
15
Has there ever been a situation in a modern Westminster parliament where there have been more independents than members of the second largest party?
11
Have there ever been Members of Parliament who weren't UK citizens?
111
What are the main reasons for why negotiating a proper Brexit deal has been so hard?
2
Has a British political party ever had more women MPs than men before The Independent Group?
5
Has there been any research into whether euroscepticism is a function of age or of values?
8
Is there any limit on how long a parliamentary session can be in the UK?