Is there a geographic component to support for Trump's wall?

The largest factor in support for Donald Trump's proposed border wall is political affiliation: support is much higher among Republicans than among Democrats. But is there a geographic component to that support? For example, is a Republican in Laredo, Texas, more (or less) likely to support the wall than a Republican in Peoria, Illinois?

Job approval for Trump is by far the biggest factor, even moreso than party affiliation. The New York Times recently did an article about this, based on polls from many sources. While looking just at the map may seem like there is a geographic component (fewer living near the border support the wall in most cases)... 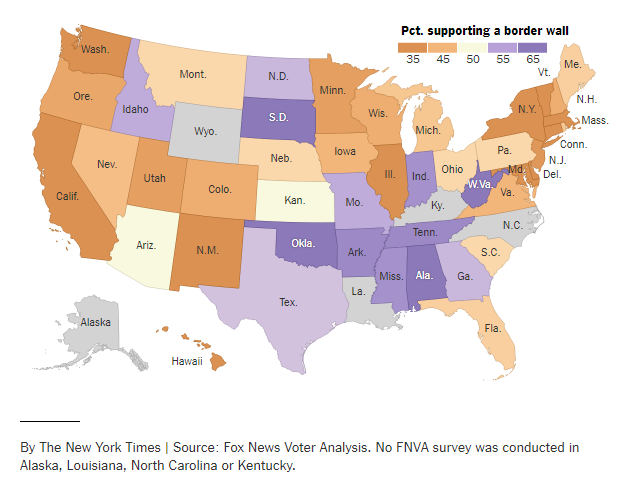 ... the next chart shows that even over time, support follows Trump's approval ratings quite well. 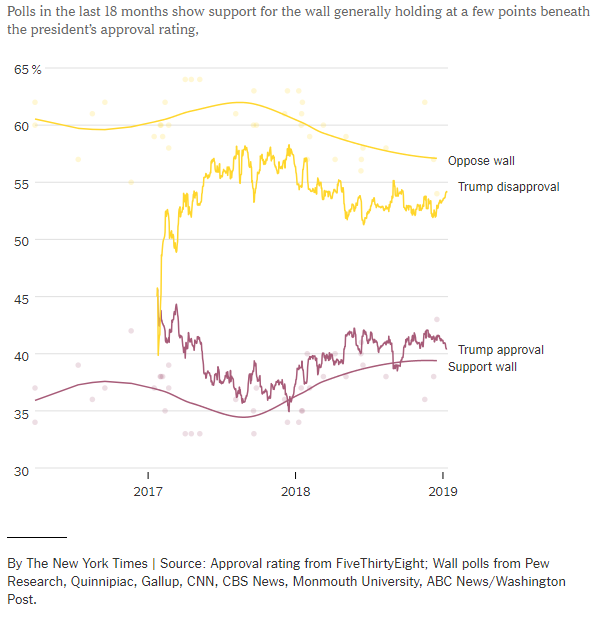 So it seems that geography is probably at best a side effect of the issue (or vice versa, depending on how you view US politics and the urban/rural divide). As they put it in the article:

There is tentative evidence in the Fox data that the wall is particularly unpopular in the relatively white and rural West, but somewhat more popular, at least with respect to the president’s approval rating, in the Northeast and inland South. This would follow a familiar pattern in American politics: It mirrors the president’s support in the presidential primary and tracks with longstanding measures of racial resentment.

Not the answer you're looking for? Browse other questions tagged united-states trump-wall .

6
How much is the wall across the Mexico & US border going to cost?
9
Why did many voters support a border wall instead of other border control methods?
12
Has Trump or his administration published an analysis of a border wall vs. other methods of policing?
15
How much of Trump's border wall has been completed so far?
19
Long term, does Trump's wall cost more than it saves per year?
6
Is splitting states to rebalance the senate really a viable strategy for the Democratic party?
8
Why is Republican targeted messaging around socialism effective among immigrants from socialist or formerly socialist countries?
3
Do American views on national racial issues fall among party lines when controlling for race?