How does the Mueller investigation compare with former investigations, of a similar size and scope, in terms of length of time, money spent, and indictments brought? What are some of the extreme examples of these categories that have occurred?

FiveThirtyEight has a chart and an article that compares the current special counsel investigation to previous ones, accurate as of November 29, 2018. 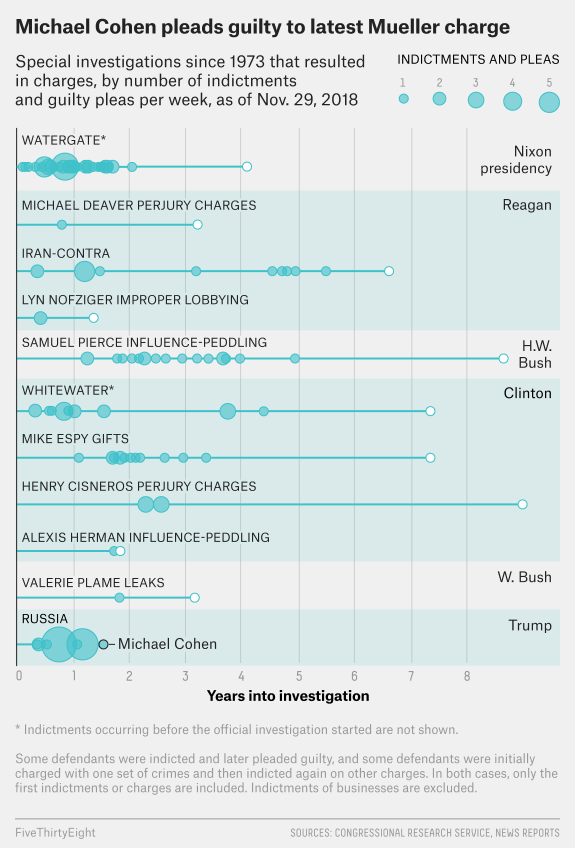 It's worth noting that the current special counsel has indicted many people abroad. Here's an older chart that labels the number of indictments of people abroad. As this article explains:

There’s a problem, though, with simply comparing the number of indictments in different investigations. That approach assumes that all the indictments are in the same general category. For the Mueller investigation, they aren’t.

The vast majority of the people charged by Mueller live abroad — specifically, in Russia. This means that unless the 25 Russians individuals accused of crimes related to election interference travel abroad, are arrested and turned over to the U.S. or are extradited by Russia, Mueller can’t actually prosecute them.

FiveThirtyEight also has an older article, with comparisons to previous special investigations in detail.

For the cost of the current and previous special investigations, PolitiFact has some of the numbers:

As we’ve reported, the investigation of President Bill Clinton over Whitewater and Monica Lewinsky — headed by Kenneth Starr and then by his successor, Robert Ray — cost upward of $52 million over half a decade. Another $40 million-plus went toward a handful of other Clinton-era independent counsel investigations.

Meanwhile, the investigation of Reagan administration officials over the Iran-Contra Affair, headed by Lawrence Walsh, topped out at more than $47 million over a roughly similar period.

Those figures are direct costs only, and are not adjusted for inflation. Their price tags would be far higher if converted to 2018 dollars.

Not the answer you're looking for? Browse other questions tagged united-states special-prosecutor mueller-investigation .

7
Supreme Court Justice Appointment Time Frame
5
How much authority does a special counsel have?
19
Long term, does Trump's wall cost more than it saves per year?
3
Has John Huber interviewed any witnesses in his review?
20
Did Mueller's report provide new evidence for Russian govt interference in 2016 elections?
8
How is justice supposed to work for the president of the United States?
3
Have Republicans or others elaborated concretely why (some) election security bills would be partisan?
5
In the Mueller report, what are the SM-[number]-[word] documents in the footnotes?