Is it typical for candidates to change their looks based on voter profiles?

One TV series includes the following scene: the wife of one of the presidential candidates is shown several pictures of herself and advised by one of the campaign stuff that based on focus groups it would be better to dye her hair blonde (as opposed to dark) before an important speech, as "any detail counts". She eventually turns blonde at least for that specific speech.

I know politicians usually change/adapt their political speech based on voters profile, but I am wondering if above scene is only fictional or it happened in real life.

By changing looks I mean a significant change from the usual image like different hair color, wearing glasses that is clearly related to a political campaign.

To narrow down the scope, I am looking for US politics answers.

Question: Is it something usual for the candidates to change their looks based on voters profile?

Q Is it something usual for the candidates to change their looks based on voters profile?

That has to be called not unusual.

This is an ancient practice. Not everyone does this, but it is a well established practice.

On October 15, 1860, one image coach to Abraham Lincoln, Grace Bedell, told him to grow the famous beard, for well founded reasons:

All the ladies like whiskers and they would tease their husbands to vote for you and then you would be President.

As to the whiskers, having never worn any, do you not think people would call it a silly affectation if I were to begin it now?

But then, he did.

This tradition of opportunism is visible in George Bush dressing up in a pressure suit flight gear on an aircraft carrier.

The campainger 'rolling up his sleeves' is even an easily recognisable cliché.

The viewership found it refreshing to see the candidates on shows other than the usual interview programs we had grown used to. Some say Bill Clinton turned around his stalled campaign by appearing on The Arsenio Hall Show, dressed up in funky clothes, wearing dark sunglasses, and playing his saxophone to a cheering audience. We all had to pinch ourselves to believe what we were seeing: Here was a candidate running for the highest office in the land appearing on late-night television, looking more like a pop star than a presidential candidate. Both Bill Clinton and Ross Perot were quick to understand the importance and power of this medium, however, and engaged in it before George Bush did. George Bush, on the other hand, was very cautious and only belatedly worked his way into cable programming after he was trailing badly in the polls. (p7)
Bruce I. Newman: "The marketing of the president: political marketing as campaign strategy", Sage: Thousand Oaks, London, 1994.

And this is now described as a standard procedure in political marketing:

The most important issue in creating any image is selecting those features that will lay the foundations for further actions. Such characteristics include personality features that can refer to voters’ beliefs about human nature (especially integrity and competence) or be a consequence of social demand in a given moment of time and particular sociopolitical situations when the campaign is conducted. They are the core around which peripheral features are placed. They are less relevant for the voters but important for the realism of the candidate’s image. The image has to present a candidate who is psychologically coherent and does not include contradictions that would make him “weird” or “implausible.” Therefore, not all the peripheral features have to be positive. Even the best politicians have some (small) sins on their conscience. It can then be said that completing the image with some peripheral features leads to the creation of a candidate’s “human face.”
Another stage in creating the image is “translating” the characteristics into behaviors that illustrate them or are perceived as if they did. Above all, these are nonverbal behaviors (see, e.g., Sullivan and Masters 1988). They include both static characteristics, such as facial expressions or clothing, and dynamic characteristics, such as behavior at a meeting, home, work, or some unexpected event (Bucy and Newhagen 1999; Druckman 2003). (p134)

Visual information from television debates is better remembered and understood than verbal content (see, e.g., Graber 1990; Mackiewicz and Cwalina 1999). This quality of television is well understood by debate organizers, who underline on purpose their visual character. Well-prepared candidates use very well the technology offered by television in order to present their nonverbal behavior, including, for instance, eye contact, a smile, or the clothes they wear. Such behavior translates into a positive image of a candidate in the viewers’ eyes. (p187)
Wojciech Cwalina & Andrzej Falkowski & Bruce I. Newman: "Political Marketing Theoretical and Strategic Foundations", Routledge: London, New York, 2011.

And if we inquire about "politicians changing clothes" based on different voters preferences: especially female politicians are of cause very keen on evaluating how their "dresses and looks" come across:

Through a focus group during her campaign for a Senate seat, State Legislator Ridley found that people liked her. She says, “they thought I was genuine... I was direct, that I wasn’t lying to them, that I was authentic. But they didn’t like it when I looked like a lawyer.” She says as female professionals in the workplace, “many women feel like they have to put on the suit and you know look like they are professional to have to get that respect.” However, the data from the focus group indicated that she should not dress in a suit. That is, in a pantsuit, perhaps she was threatening to some men; however, when she wore “the skirt and blouse [people thought] she looks like she is talking to us.” State Legislator Ridley found a solution in that her team worked on making her look “professional and approachable, but not in a severe way.” She says, “I wore skirts and blouses more than suits. I wore dresses, which is fine with me; I like dresses. I didn’t feel like I was wearing something that wasn’t me.” (p42)

DeShawn King, a state representative in a southern state, would likely disagree with the notion that it is inherently harder to be a lesbian woman than a gay man in politics. However, both Renou and King make it clear that being both gay and a person of color makes politics extremely difficult. King sought to market himself as both professional and approachable to his constituents. As a gay man, he found his appearance became a source of added scrutiny to his candidacy. To please his various constituents, he dressed differently depending on his audience. When he attended events with older people, he wore a suit and tie. But when he went to neighborhood events where he would interact with youth, he typically wore jeans in order to “relate to them better.” (p93)

Minita Sanghvi: "Gender and Political Marketing in the United States and the 2016 Presidential Election –– An Analysis of Why She Lost", PalgraveMacmillan: Cham, 2019.

Quite famous for changed looks is Hillary Clinton herself, who not only changed but really transformed herself in most fundamental ways, not only in looks or content of speech, but also in diction and accent (more on that), and name.

Some of that is 'the occasion', some is changing fashions, some of that is ageing, some is in direct response to what potential voters thought of what they saw.

There are many detailed stories told about these visual alterations, but many of those are found collected in one book:

In stark contrast to Barbara Bush, who adamantly refused to alter her appearance in any way to cater to public tastes, Hillary enlisted the Thomasons’ help to revamp her image. Arriving in Los Angeles to campaign for the California primary, Hillary willingly placed herself in the hands of Cliff Chally, who did the costumes for Designing Women, and the hairdresser Christophe Schatteman (better known simply as “Christophe”).

Hillary emerged from the first all-day makeover session with a new wardrobe of pastel power suits and a shorter, honey blond coif. Gone forever were the trademark headbands that seemed to peg Hillary as a humorless, drab, power-hungry career woman.
Hillary would undergo many transformations over the years; the changes in her coiffure alone would spawn an immensely popular “Hillary’s Hair” Web site. But the new, more feminine and sophisticated-looking Hillary also had a new line. Gone were all references to power sharing. At least for the time being, Hillary’s most important role was that of wife and mother.
Christopher Andersen: "American Evita. Hillary Clinton’s Path to Power", HarperCollins: New York, 2004.

The hair-site mentioned seems gone now, but the topic lives on.

Somewhat of a commentary: if this not about the frequency or distribution of such changes:

The insistence that there is a ‘‘true’’ Hillary Rodham Clinton to be figured out stems from and simultaneously maintains the cultural illusion that there is one central definition that should govern women’s public and private selves.
On the continuum from pantsuits to cleavage, she either fails to conform to the disciplinary rules of femininity or succeeds too well. Consequently, HRC forsakes the test of self-formation that fashion signifies. After all, if she does not know how to dress, how can she make the hard choices required to govern the nation?
Roseann M. Mandziuk: "Dressing Down Hillary", Communication and Critical/Cultural Studies Vol. 5, No. 3, September 2008, pp. 312 316. DOI: 10.1080/14791420802239685

In fact, the creator of the fictional persona from the question admits that Claire Underwood is very much based on Clinton.

Where I do think this would not be specific to the person being talked about. Dress, hair, manners of gesture of of speech are of cause all some kind of code, constantly interpreted and re-imaged. While some politicians seem to change every five minutes and some might find that 'a bit much': Who doesn't dress for an occasion?

I realize the question specifically asks about the US, but, Canada being the 51st state, I thought this might be relevant. The current Canadian prime minister Justin Trudeau is known to dress for the occasion.

Here he is meeting with businessfolk: 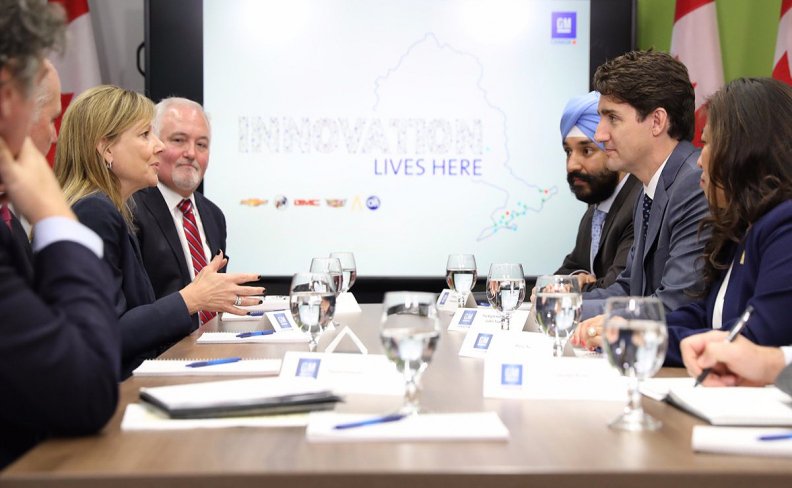 Here he is among the hoi polloi (via National Observer): 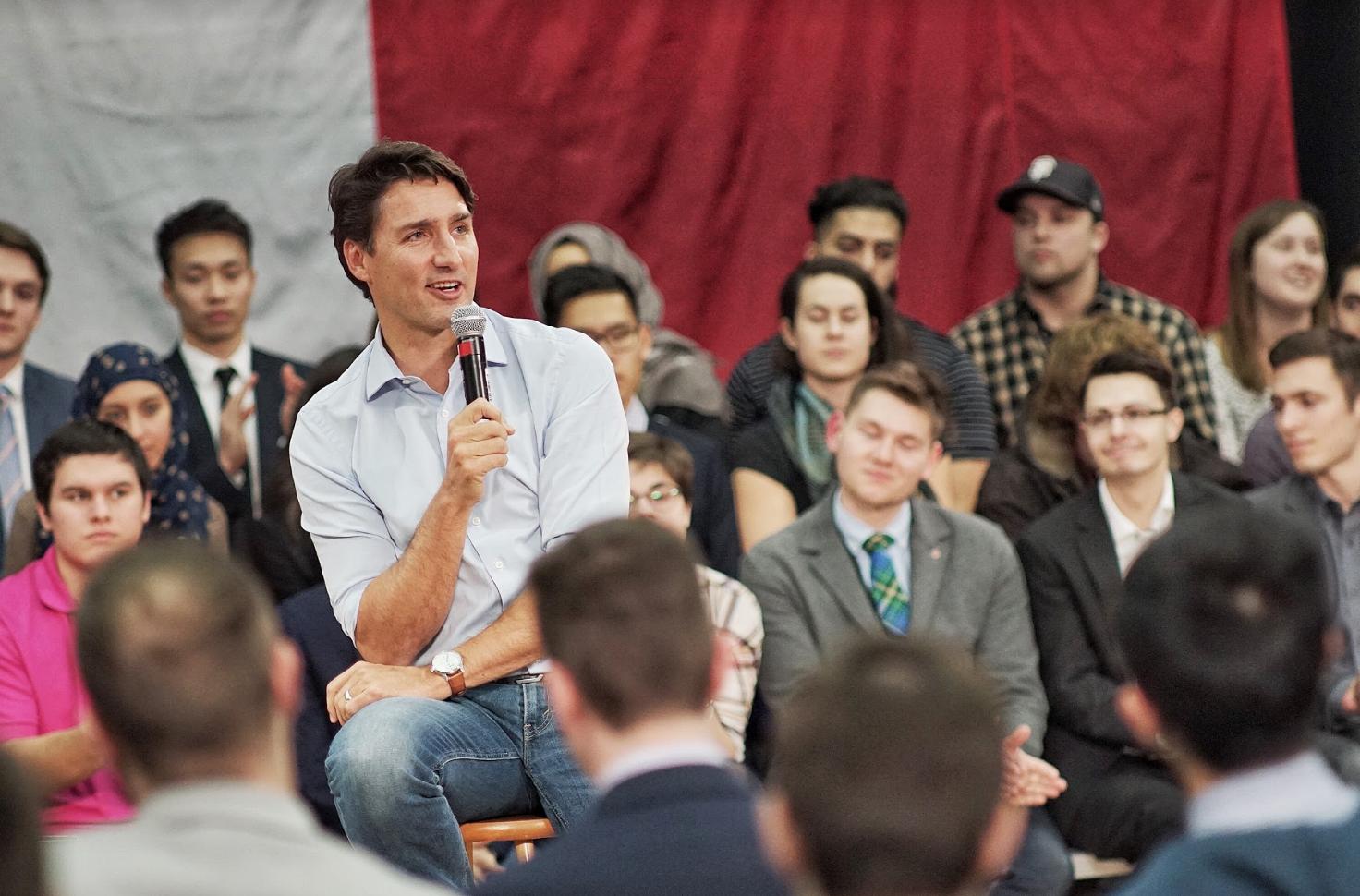 And various other outfits targeting specific audiences (via CBC and The Georgia Straight): 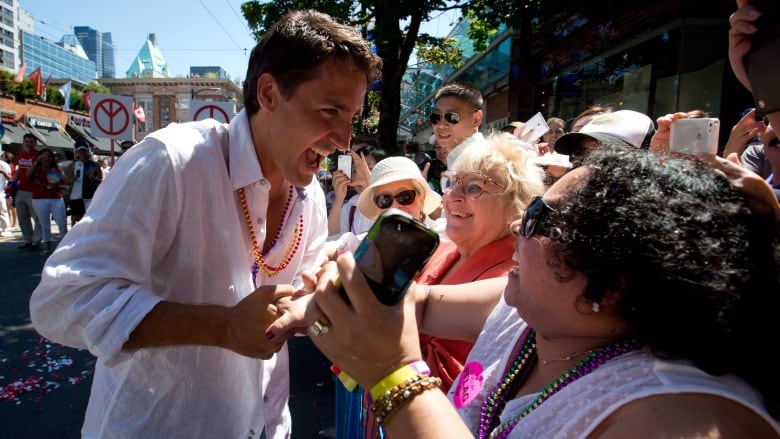 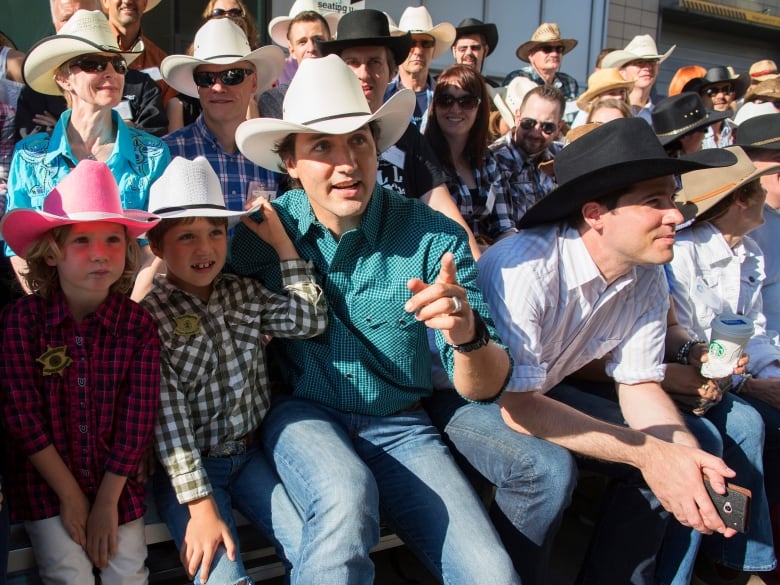 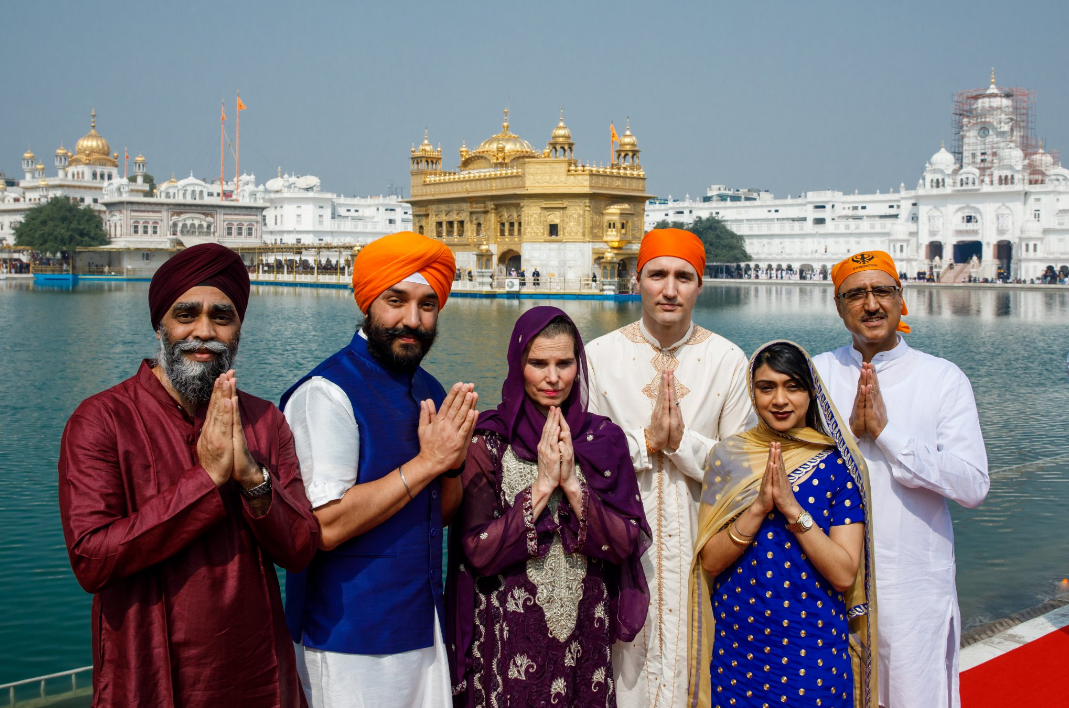 The BBC documentary series The Century of the Self has the following..

I think it's from the 4th part in the series, but it may be the third.

The series is about how those in power used the ideas of Sigmund Freud to appeal to the subconscious desires of the public, first as propaganda during WWII, then for selling consumer goods, and finally by politicians using focus groups to target swing states in the US and marginal seats in the UK.