Difference between “Department of …” and “… Department”

As we see it also use the pattern of Department of ... but its abbreviation is meaning Education Department. Why is it different from others? Why isn't ED abbreviated as DOE?

It's likely because there are two departments starting with E, the other being the Department of Energy.

Officially, every cabinet-level department is known as Department of _______, as shown on their official seals: 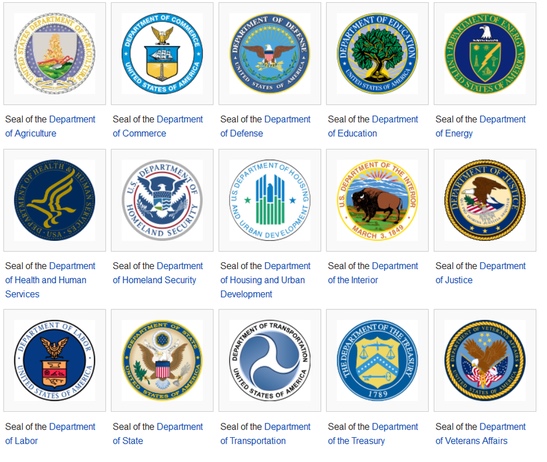 Informally, the names, abbreviations, and word order are arbitrary. For example, the Department of Justice is the DoJ, but is often called the Justice Department. Homeland Security is DHS, and Health and Human Services is HHS.

The Treasury Department and the State Department don't have abbreviations. They're just called "Treasury" and "State" respectively, since DoT is the Transportation Department, and State is short enough on its own.

The names are really just chosen to avoid ambiguity and aren't considered "official" in the legal sense.

Not the answer you're looking for? Browse other questions tagged united-states cabinet .

1
Is the House responsible for deciding what to fund in the government and is this usually done with “mini-CRs”?
17
Legality of Syrian invasion by US and allies
13
Censure due to holding an Army commission and a seat in Congress
1
Why are property taxes higher in some places than others (United States)?
1
US State Department and Department of Defense
3
What has the State Department said about Giuliani's claim that the Department asked him to talk to Ukraine?
1
Which Inspector General oversees CFIUS?
34
When did the US start separating illegal immigrants from their children and what is this policy called?
1
Was John Abizaid's statement about the Iraq War rationale taken out of context?