Why is some Russian asbestos bound for the US stamped with Donald Trump's face?

After about 41:20 in the YouTube video for the PBS NewsHour full episode March 13, 2019 it is reported that some asbestos mined in Russia destined for the US bears a stamp of US president Donald Trump's face.

It mostly comes from Brazil, but in 2017 that country banned the mineral, as have more than sixty other nations. As Brazil winds down production, asbestos imports will increasingly come from Russia; some shipments are stamped with the seal of the president’s face, along with the words “Approved by Donald Trump, 45th president of the United States."

Why is this done? Is this just some local workers having a bit of fun, or does this represent some official approval process or shipping requirement?

Relevant is some information a little earlier, around 39:40:

So in 2016 Congress and the Obama administration enacted an updated Toxic Substances Control Act. The idea, give the EPA more teeth to regulate asbestos, and other hazardous chemicals that remain in the environment. 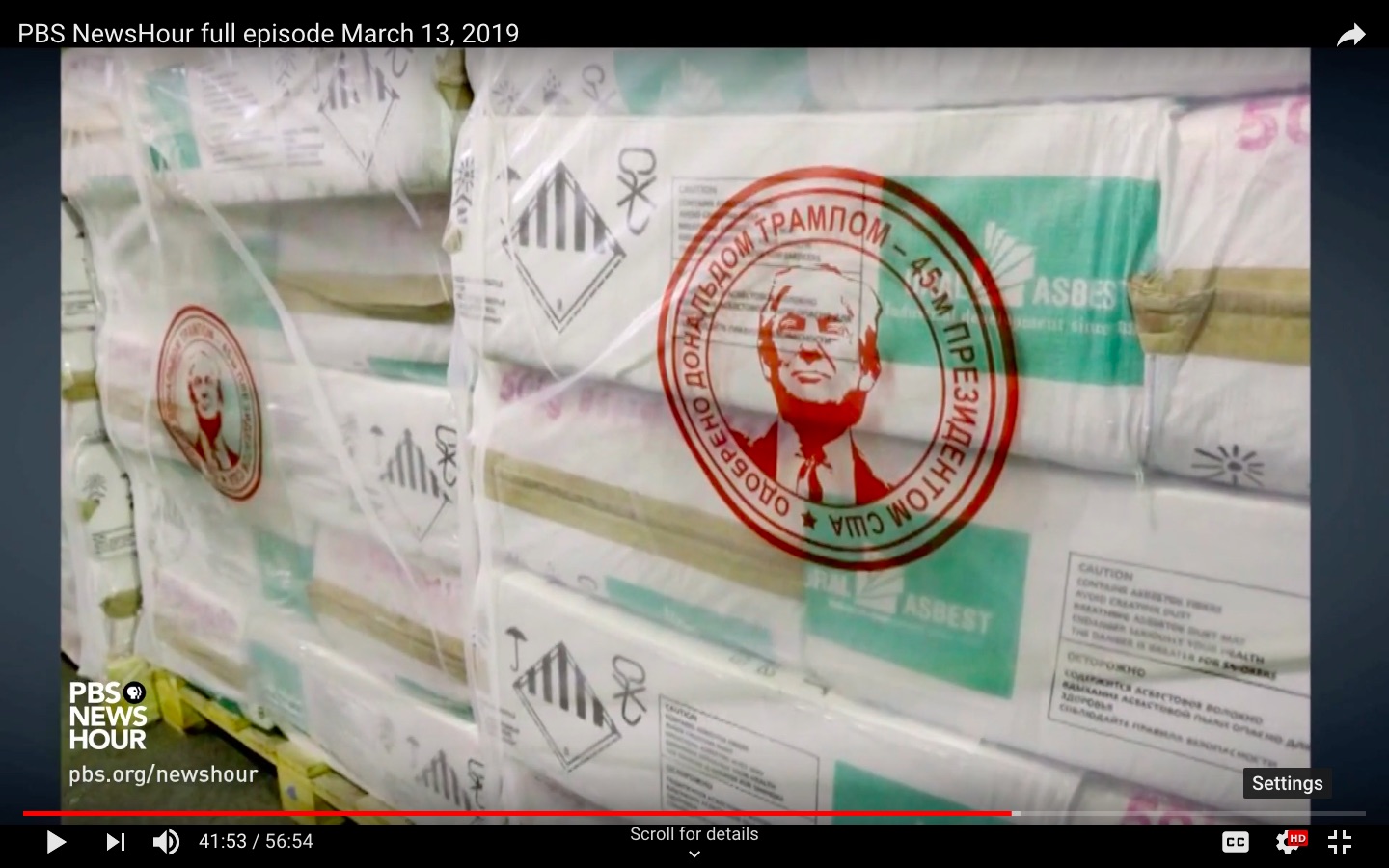 Trump made it easier for Russia to export asbestos to the U.S. He has a track record of being pro-asbestos as well. There is no requirement to have his face on the shipments, but it makes a good news story, because people who hate Trump see it as disgusting, and pro-Trump people support the move. Trump himself likely enjoyed his face being stamped on the package as well. It's just advertising though, and it has been a very successful advertisement.

Not the answer you're looking for? Browse other questions tagged united-states russian-federation trade .

5
Is popularity with the Russian public important for Putin?
14
Is the Russian legislature unusually enthusiastic about Trump's victory?
9
Does Donald Trump's reelection filing create a different legal atmosphere for him and for nonprofit organizations?
2
Why did Sean Spicer talk about Donald Trump's bath robe?
4
Are the 21 countries expelling Russian diplomats only for solidarity?
8
Has Trump's position on the existence of Russian meddling been consistent (in the past few months)?
5
Why did Russia appoint Steven Seagal as a 'special rep.' for US-Russian humanitarian ties?
9
When was the investigation into Donald Trump and Russian collaboration first made public and by who?