What is the difference between the UK red lines and hard Brexit?

One aspect that I have not seen discussed in relation to the Brexit negotiations is in what ways a hard Brexit differs from the main aspects of what the UK wants from Brexit in the first place.

Taking a look at the infographic 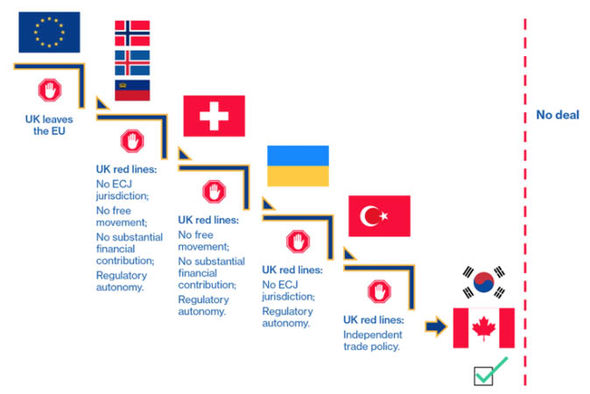 Granted that this graphic was produced by the EU, and therefore may be biased, or an oversimplification, but it nonetheless places the wide ranging issues in a nutshell, so is a decent point of reference.

What substantive ways are the UK's position on independence on trade, borders, and jurisprudence separate from a "no-deal" scenario?

"Hard Brexit" has been summarized as "Trade under WTO rules". The South Korean and Canadian flags refer to EU trade agreements. The green checkmark means that the EU presumes a similar trade deal can be reached with the UK.

Effectively, that means the UK's red lines do not preclude a trade agreement, while "Hard Brexit" by definition does.

"Hard Brexit" is not well defined, but generally it means less alignment with the EU than remaining in the customs union or single market as was originally proposed by many Leave supporters and by the official Leave campaign during the referendum.

The UK government's red lines do require a hard Brexit, having ruled out being a member of customs union or single market, so there is no real difference.

If we take "UK's position" to mean the Political Declaration that accompanies the Withdrawal Agreement (both agreed by May with the EU, but 2-3 times rejected by MPs; the Declaration twice, the Agreement thrice) then this [tentatively] common vision with the EU says:

[23.] The economic partnership should ensure no tariffs, fees, charges or quantitative restrictions across all sectors, with ambitious customs arrangements that, in line with the Parties' objectives and principles above, build and improve on the single customs territory provided for in the Withdrawal Agreement which obviates the need for checks on rules of origin.

[30.] In line with Article V of the General Agreement on Trade in Services, the Parties should aim at substantial sectoral coverage, covering all modes of supply and providing for the absence of substantially all discrimination in the covered sectors, with exceptions and limitations as appropriate. The arrangements should therefore cover sectors including professional and business services, telecommunications services, courier and postal services, distribution services, environmental services, financial services, transport services and other services of mutual interest.

So they aim for a fairly comprehensive deal in both goods and services. That's perhaps even more ambitious than the deal with Japan or Canada, so call it Canada+ or something like that. Do note that in the jungle of Brexit proposals, the same term has been used to mean something somewhat different

Canada plus plus would mean a hard Brexit and an arms-length relationship with the EU based on reducing tariffs and trade barriers and harmonising regulations. It is attractive to the Brexiters because it would keep Britain out of the single market and customs union. But many Remainers would consider it to be very similar to a no-deal Brexit. It does have the advantage, however, of being supported by the dissenters in the House of Commons – as long as the backstop is not part of the deal.

As one pundit said comparing the multiple Canada+ visions:

Ardent Brexiters have claimed that May has a simple option. “The PM must go straight back to the EU’s [free-trade agreement] offered by Tusk in March,” said the former cabinet minister Owen Paterson.

This ignores the fact that the EU will only agree a free-trade deal if the UK signs the existing withdrawal agreement, which includes the Irish backstop. When the EU talks of “pluses” in any Canada-style deal, it means other non-trade deals on security, fisheries and foreign policy. When Brexiters talk of pluses, or Supercalifragilisticexpialidocious Canada, they have been looking for advantages that Brussels has repeatedly ruled out.

The take-home message from this is that the future relation can be reached either by upgrading a no-deal or downgrading from May's Withdrawal Agreement. Those who can't stand the backstop (included in the Agreement) want the path former... or they want something completely different in the long, e.g. UK being unilaterally tariff-free with the world etc.

So I'm largely eschewing what "hard brexit"/"no-deal" means in terms of future relations, since it depends on who's talking and what else they envisage should happen after the event. If nothing else happens, a no-deal Brexit just reverts the UK to WTO rules, in terms of trade. Even this is not a simple affair, because the UK is currently [re]negotiating its (future) WTO schedules.

Finally, the vision from the Declaration has been also called "Brexeternity" because its wide scope would likely mean a huge amount of time/negotiations to fully realize.

8
What is the difference between EFTA and the EU?
9
What mechanisms exist to prevent “hard” Brexit?
14
Brexit: leaving Customs Union and/or Single Market — what do these things really mean?
13
Difference in Brexit terms
113
What are the main reasons for why negotiating a proper Brexit deal has been so hard?
8
Freedom of movement directive after a hard Brexit
4
What is the difference between Theresa May's Withdrawal Agreement and its associated Political Declaration?
13
Exact Brexit date and consequences
4
Brexit deal and the EU national governments