There is a recurring narrative in the Muslim majority countries which essentially says this:

When some non-Muslims are actors of a terror attack, the attacker(s) is mostly not called a terrorist among media/mass-people/government/and so on, and instead given various titles like "lone wolf", "psychologically disturbed", "emotionally disturbed", "relationship issues", and so on, which essentially, either voluntarily or involuntarily, paints a soft picture of the attacker. Also, in the media and according to the mass-perception, the attacker's religion do not come into account. When some Muslims are the actors of a terror attack, the attacker's religion comes into play and hence they are taken as hostages as a whole irrespective of their nationality/race/color/community, and so on.

The following are some examples of this narrative: 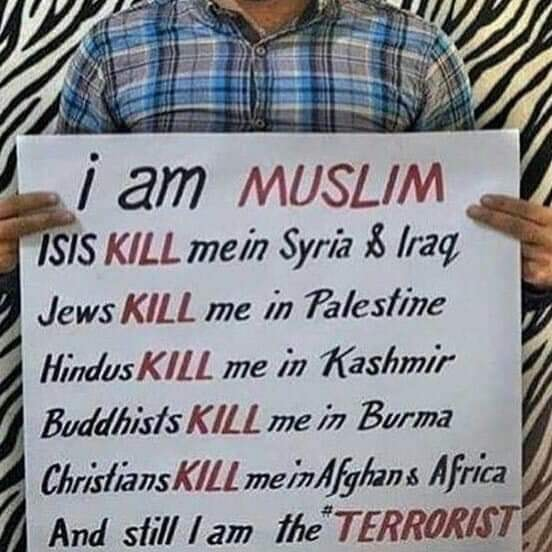 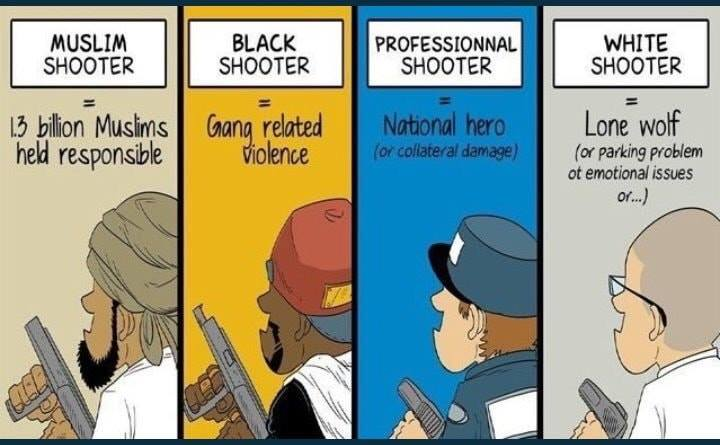 What is the origin of this narrative?

Note: to my opinion, this is true. When that Australian guy shot dead 49 Muslims in Christchurch, no one is talking about "blocking Australians to enter New Zealand" or laying mines in Tasman Sea. Rather everyone is like: "Oops! We just lost a point here."

The problem with narratives is that they mix facts with subjective interpretations, usually with a political motive. This question is ambiguous because it embraces a narrative (unequal treatment of Muslim vs non-Muslim terrorism), itself based on another narrative (Islam is a threat and leads to violence).

Both these narratives offer a very distorted view of reality which exaggerates and generalizes facts beyond reason.

This illustrates a polarization which is desired by extreme parties on both sides: it is in the interest of extremists to paint a dark and threatening picture of "the enemy" in order to rally more people to their views. It just happens to ignore that the vast majority of people would not recognize themselves on either side of this picture, as they are perfectly happy to co-exist with different cultures.

Edit: it's also worth mentioning that there is no commonly accepted definition of "terrorism", and sometimes this adds to the confusion especially when political motivations come into play.

When some Muslims are the actors of a terror attack, the attacker's religion comes into play and hence they are taken as hostages as a whole irrespective of their nationality/race/color/community, and so on.

You should Google "white privilege". In short, minorities are responsabilized of the acts of any of its members, acts by members of the majority have only individual responsabilities.

A Muslim man beats his wife? "That's how they are", with some luck you will get acknowledged that not all of them do the same, and if some of them appear in the press explaining that they do, you will believe that.

John Whitson beats his wife? "He has always been a bad man." You will not ft as a result that Frank Blonde probably beats his wife, too, and you will not feel an urge or compelled to explain everybody that, even if you are white like John, you do not beat your wife.

Not that I think that this kind of thinking is a majority-only thing, and members of minorities can absolutely be as biased as members of the majority, but

A) except for ghettos, members of the majority can be more isolated from the minorities than otherwise.

B) the narrative that you most often see (specially in the media) is the majority's narrative.

The origin of this narrative is likely Islamophobia.

I can't find direct evidence that this disparity does exist. I consider it quite likely, however, as it's easy enough to find other disparities in the depiction of Muslims and non-Muslims in connection with terrorism. For instance, a study found that attacks by Muslim perpetrations received several times as much news coverage.

As for the reasons, as I expect you already know, anti-Muslim sentiment is widespread throughout Europe and the United States. As such, there's a tendency to paint Muslims as being more violent. Since the word "terrorist" evokes more violent or dangerous connotations than "disturbed individual" or something along those lines, it's more frequently used for Muslim perpetrators of mass attacks than for non-Muslim perpetrators.

In the United States in particular, there's an additional dynamic. Many people on the right of the political spectrum believe in few restrictions on gun ownership. As such, when an attack occurs that involves a gun, they're more incline to place the blame on non-gun-related issues. If the shooter is white and Christian, typically this takes the form of mental illness. While they could, in theory, put forth white supremacist ideology as the reason, thus urging a focus on that instead of gun control, the Republican Party is also the more racially conservative party, and indeed the party more hospitable to racism. This is, of course, also why it's easier for their base (and to a lesser extent, society as a whole) to accept the alternate reasons of gang ideology for black shooters, and Islamist fundamentalism for Muslim shooters.

Now, that doesn't mean that the words "terrorism" and "lone wolf" don't have legitimate, unbiased uses. A terrorist is someone who employs violence, particularly indiscriminately, for a political or ideological aim. A "lone wolf" is an attacker who has no affiliation with an violent extremist group, particularly one who acts on their own. The two aren't exclusive, either: Eliott Rodger, for instance, was a primarily misogynist terrorist with no affiliation or even declared allegiance to any group. But there's likely to be a disparity in how frequently they're used to describe different classes of attackers.

Whilst others have addressed some of the many problems with the premise, to which I will add a further point below, I'm going to point out the reasons why people may think so, which is the claimed question:

These first two are reasons that will be true pretty universally; the next are a bit more case-specific

I will now address one of the major issues with the narrative; however note I am doing this from a European (I'm in the UK) p.o.v.

Here is a Wikipedia article listing high-casualty (more than ten fatality) terrorist attacks in Europe. Of the ones in western Europe in the last decade, only Brievik's was one that isn't associated with Islam by the perpetrator's self-declared motivation. He was, of course, declared a terrorist. (This relates somewhat to point 3 above.)

This is in large part due to the perpetrators self declared motivation.

and hence they are taken as hostages as a whole irrespective of their nationality/race/color/community,

This is a real problem, and sadly a fairly common one. In fact it is something that happens to other communities in Europe, for an obvious example to Jews who have been at the end of a series of terror attacks in recent years in Europe based on the same principles.

Note: to my opinion, this is true. When that Australian guy shot dead 49 Muslims in Christchurch, no one is talking about "blocking Australians to enter New Zealand" or laying mines in Tasman Sea. Rather everyone is like: "Opps! We just lost a point here."

Firstly, the last bit about 'oops' is totally untrue. Secondly the rest of it is totally unrelated to the claim that white people involved in terror don't get called terrorists.

Mass media military-industrial political propaganda is the origin. It shifts the narrative from some relevant diagnostic question like "Has our nation perpetrated comparable crimes elsewhere that might, when falsely denied and ignored, have predictably inspired grassroots retribution?", to less relevant and very peripheral symptomatic considerations like "Is foreign religion X good?", "Are we too tolerant?", or "How much shall we add to our security budget this year?"