Is there a survey of the public opinion whether no-deal is preferable to the November deal?

A number of UK politicians prefer a no-deal Brexit to the November deal agreed between the government and the EU (but twice rejected by the UK Parliament). Yet the majority of the MPs also to rejected a no-deal Brexit.

But what is the public opinion on the relative merits of the two options? Is no-deal faring better or worse than the November deal in any surveys of the public on the matter?

Interestingly, but not directly answering my question, a YouGov survey from March 14 found that the public is somewhat against a Brexit delay by 43% vs 38%, unlike the Parliament which voted for one. The public also favored a short[er] (weeks or months) rather than a longer delay, by a somewhat wider margin of 47% vs 33%. Perhaps more relevant, but not completely satisfactory a survey the day before found that the public wanted the MPs no reject a no-deal Brexit by nearly similar margin of 46% vs 33%. Perhaps there is an older survey on the popularity of the November deal with the public. Yet by itself it wouldn't answer much, since the only real choice at this point seems to be between no-deal [by default] and the November deal. But I'll settle for the popularity of the November deal if the dilemma I'm interested in hasn't been surveyed.

On March 1st there was such a poll published by YouGov (conducted at the end of February):

In a series of head to head questions we asked Britons whether their preferred Brexit choice would be to accept the draft Brexit deal, leave the EU without a deal or have a new referendum. 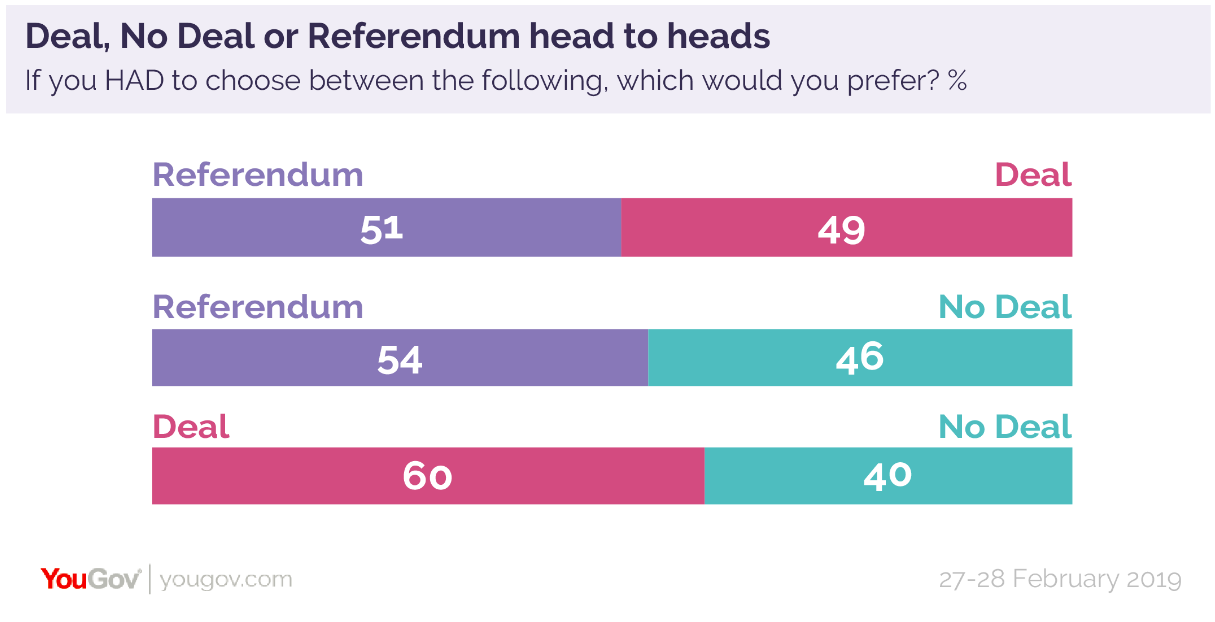 Taking the deal clearly beats leaving without any deal by 60% to 40%, while having another referendum leads the no deal option by a more modest 54% to 46%.

However, when asked to choose between accepting Theresa May’s draft deal and having another referendum, the public remain split down the middle. 51% would seek a new referendum in this scenario, while 49% would take the Brexit deal.

I'm leaving the rest of my answer below as has some fairly relevant info as well. 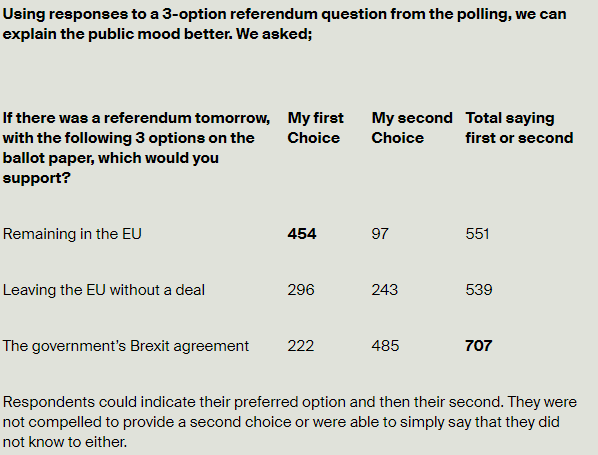 with the following interpretation:

For our respondent’s first preferences, the government’s Brexit deal is, as with the head to head style questions, less popular than leaving without a deal and clearly less popular than simply remaining in the EU. But critically, if asked to compromise – indicating their second preference, the PM’s deal becomes the least unpopular solution.

So if this one is to be believed, the government's deal would beat no-deal in a two-choice poll.

YouGov has conducted a similar 3-way poll in December. Their interpretation:

The results show that as things stand, when it comes to their first choices Theresa May’s deal is ahead in just two constituencies – the Tory-held constituencies of Broxbourne and Christchurch, and gaining just 27% across Britain.

However, whist May’s deal is supported by just over a quarter of the public, the simple fact is that there is no majority support for any of the three options we presented, meaning that in order to find what outcome would gain majority support we should also look beyond the public’s first preferences.

And when the battle is turned from a three way split, where no compromise is needed, into straight two-way fights, Theresa May’s deal starts performing a lot better.

One way of analysing this is to use the “Condorcet method”. With this approach, instead of looking for which option is most people’s first choice, we should instead test which one beats all the others in a head-to-head fight. We do this by removing each option in turn, and then looking at the second choice of people who backed that option.

When we remove the Deal as an option and reallocate these preferences in a straight Remain Vs No Deal contest we find that Remain would be slightly ahead, winning 52% to 48%.

If the Deal is pitted against No Deal, the majority of Remainers swing behind what Theresa May is proposing, meaning it wins 65% to 35%. The calculation for Remain vs the Deal is a lot tighter. Although the vast majority of no dealers swing behind May’s plan, because Remain begins from a much higher starting point the result is a statistical dead heat – with 50% for each option. 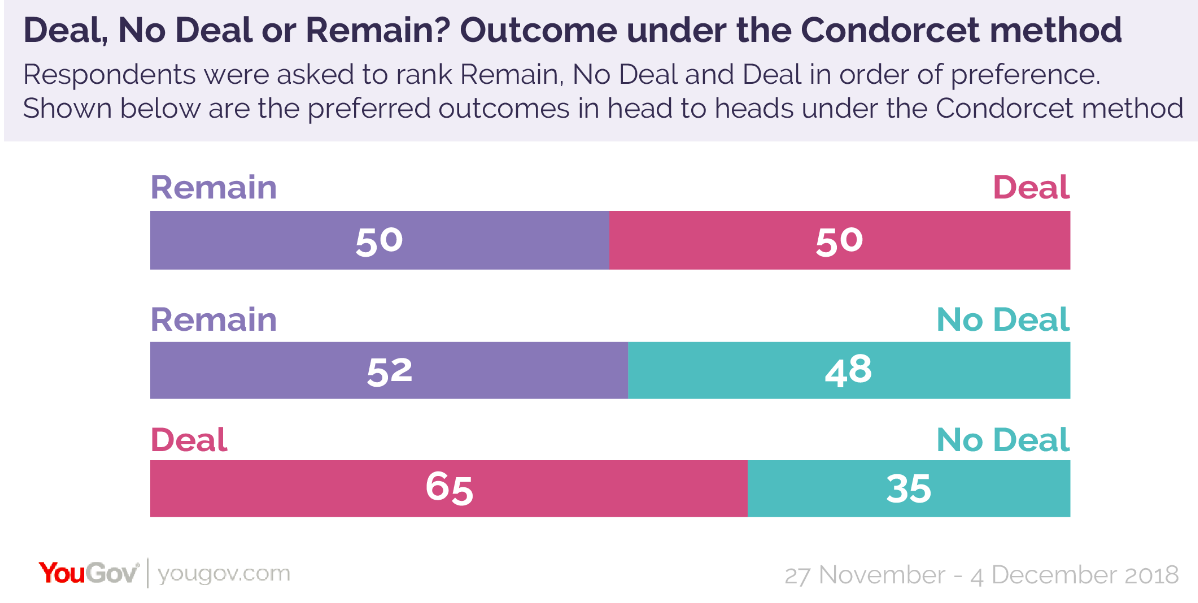 Not the answer you're looking for? Browse other questions tagged brexit public-opinion .

12
Do we know what "hardness" of Brexit people actually wanted in the referendum, if there had been other choices available?

9
What is the UK government hoping to gain by the continued prevarication on brexit negotiations?
8
Why is there such a long delay before putting the "Meaningful Vote" to the British Parliament
48
How did Theresa May remain PM after her Brexit deal was rejected?
18
What will happen if Parliament votes "no" on each of the Brexit-related votes to be held on the 12th, 13th and 14th of March?
6
What is a "confirmatory" referendum in the context of Brexit?
8
Are there any polls on the new Swiss immigration referendum question?
10
According to UK government, Parliament cannot stop a no-deal Brexit: Could this also be used to push through the agreement agreed by Theresa May?
9
Why is Labour sticking with Jeremy Corbyn?
4
What are the UK Government's arguments against extending the Brexit transition period?