What would the process look like for adopting Ranked Choice (in particular, instant-runoff) Voting in the US?

I'm not asking to discuss whether Ranked Choice is a good system, or the particulars of how it would be implemented with regards to our electoral college system, or even whether people would choose for it to be adopted.

I'm asking that, assuming most people/politicians are for it, what would the process look like for changing the US voting system to adopt Ranked Choice or Instant Run-off Voting?

Is it as simple as "House proposes a Bill, and then everyone has to approve of it in the various branches, and then poof, it's there?" Because, if so, why hasn't literally anyone proposed such a bill yet?

Is it as simple as "House proposes a Bill, and then everyone has to approve of it in the various branches, and then poof, it's there?"

Because, if so, why hasn't literally anyone proposed such a bill yet?

Maine has already switched to a ranked-choice voting system in 2016 through a referendum question 5 (An Act to Establish Ranked-Choice Voting).

Question 5: Citizen’s Initiative
Do you want to allow voters to rank their choices of candidates in elections for U.S. Senate, Congress, Governor, State Senate, and State Representative, and to have ballots counted at the state level in multiple rounds in which last-place candidates are eliminated until a candidate wins by majority?

Here's what the ballot looked like for a 2018 US Senate elections in Maine: 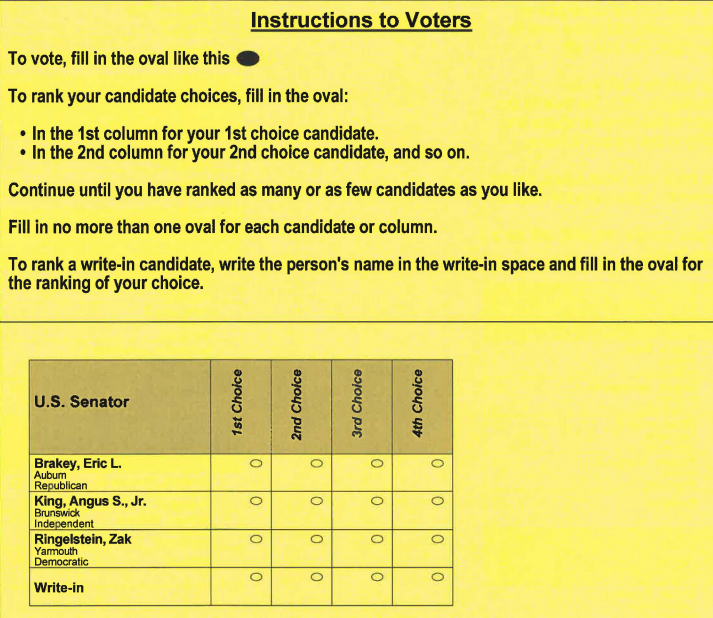 Proposing such a bill on a federal level would be unnecessary and potentially unconstitutional, controversial, as it will impose election rules on individual states.

EDIT: As @Avi pointed out in the comments, such a bill is likely to be constitutional as the Congress has the power to regulate elections for Senators and Representatives (Article I, Section 4):

The Times, Places and Manner of holding Elections for Senators and Representatives, shall be prescribed in each State by the Legislature thereof; but the Congress may at any time by Law make or alter such Regulations, except as to the Places of chusing Senators.

39
If the US switched to the metric system, what would the net 20-year economic savings be?
3
Is single transferable vote an adaptation of instant runoff voting for multiple winners?
40
What arguments are there against ranked-choice voting?
5
Why is Instant Runoff Voting the accepted form of ranked voting?
1
Would it be possible for US cities to adopt participatory budgeting under the current system?
4
Effect of Fair Representation Act
6
What are the actual mechanics of counting rank-choice (instant-runoff) votes?
15
How will New York City physically implement the ranked choice voting algorithm with thousands of unique mayoral votings possible?
11
New York's ranked choice voting, dealing with "a tie at the bottom"