Is it true that terrorists prefer bombs to other weapons?

A US Air Force colonel wrote in 1995 that

It is true that insurgencies that resort to terrorism continue to vex security forces. But the weapon of choice for the terrorist is not the kind of armament the Second Amendment seeks to protect; rather, it is the bomb.

As you can probably guess, that analysis has as its main topic something else, so the issue of terrorist choice of weaponry isn't developed much further in there.

There's another (2010) opinion in the Economist along the same lines, but which also goes into putative reasons for it:

This brings me to something I've always wondered: why are terrorists so attached to bombs, as opposed to other engines of death and catastrophe? Assassins sent to take out specific targets use a wide variety of interesting tools, particularly poison. But terrorists seem to be strikingly uninterested in poison. They want to blow things up. One could imagine a few reasons for this. Explosions are good for getting media attention: they leave lots of good visuals for the cameramen afterwards, which is important since you can't invite the cameramen in advance (so they usually miss the moment of the attack). And there's a metaphorical satisfaction to a bomb. It's a blow delivered. Suicide bombs are even more effective because they present no immediate target for retributive justice, which can create political pressure for the victim country to engage in excessive or futile punitive military actions; this is often the very goal of the attack. With gunman attacks, the response and the hunting-down of the gunmen is itself a satisfying act of retribution, and that satisfaction can blunt the target nation's willingness to get involved in the drawn-out cat-and-mouse game the terrorist wants to lead them into.

Of course, it may be difficult to, ahem, survey terrorists in a systematic fashion, but is this view that terrorists prefer bombs as their weapon of choice (assuming they get to chose, they might be restricted in some circumstances) largely uncontroversial?

I think the hypothesis is mostly correct (but firearms aren't all that negligible in comparison), as far as actual incidents go. I found a 2007 RAND paper which uses a random sample of terrorist attacks, admittedly from a database that is skewed toward more recent attacks (in terms of volume): 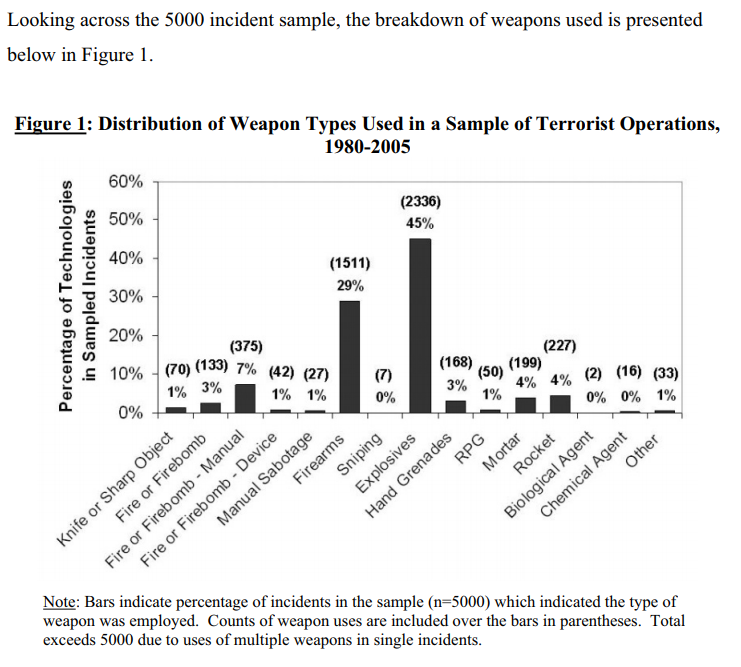 More sophisticated explosive-based weapons (notably RPGs, mortars, and rockets) are only a small slice of the overall use of explosives, but nonetheless make up enough of the total weapons used to be worthy of separate consideration. Very few instances of sniping by terrorist groups – a tactic representing the “high end” of firearms use – were present in the sample. Use of unconventional weapons was similarly rare. In a distinct example of comparatively low sophistication weapons dominating terrorist technology choices, of the fire or firebombing incidents which could be categorized, the number of manual “thrown firebombs” outnumbered more sophisticated incendiary devices almost nine to one. These basic results are consistent with previous results in the literature that explosives and firearms dominate terrorist weapons choices.

First, it is important to understand from the outset that this research effort is extracting information from a dataset that was not created with this particular application in mind. As is the case with most datasets on terrorist activity, the RAND-MIPT Terrorism Incident Database is dependent on the reporting through media outlets that provide a description of an event and the context within which it occurred. The reporting is by definition non-standardized, and is subject to source filtering by officials controlling disclosure of important information, the writing and editorial process, and in many cases also subject to a translation from another language into English. Consequently, while some information is fairly clear, such as “The attacker used a bomb,” it is less clear at times as to what the attacker’s objective was since context information such as, “The Mayor was in the building while attending an event,” may be omitted from the incident description.

Since for some reason this database has elicited much skepticism and speculation in the comments; here's are some links to it's (new) homepage, full data set, and a screenshot below what it looks like (the first few incidents, obviously those from '68 aren't included in the sample considered in the paper; the full set has some 40,000 rows).

I Don't want to detract from @Fizz's answer but what I had to say was too long for a comment. I have lived long enough for the definition of terrorism to go from a combat tactic to a hate crime perpetrated on a group of people.

For example Sherman's March to the sea, an example of terrorism as a tactic of an organized army. Further, the bombing of Dresden and more recently the IRA campaigns of the 80s. My opinion is that the tactic crossed over with the discovery of sleeper cells and successful bombing of the World Trade Center in the early 90s and the Oklahoma City Bombing. Terrorism wasn't to further a political agenda of a Nation in war but to advertise a political view.

All together, what has both the combat tactic and what is more recently is labelled as terrorism have in common is the "Terror" part. I believe that is important, not the number of casualties, but the fear and the disruption of people's normal life.

The connection of all this to the question is that it would be obvious that a bomb will produce more terror than most other weapons is in the properties of that weapon and the feeling of the chances of escaping it. Automatic weapons produce a lot of casualties in a short time but there is always the feeling that if you drop to the ground fast enough or lock a door, or run in a zig-zag you may escape it (Not in practicality but it is the feeling), whereas a bomb will go through walls and cannot be dodged. So the conclusion is that in the past, the bomb is more popular.

However, now that terrorism has moved on from being a combat tactic of an organized army to cells to individuals, you will see automatic weapons becoming more popular since it over-comes the problem of using bombs by individuals and that is the high barrier of entry into a successful bombing. What I mean is that you need several ingredients, some of which are heavily control by governments and or difficult to manufacture, the skill to put the ingredients together and length of time to execute a successful bombing. Whereas an automatic weapon may already be available and at hand and requires almost no skill