What is the point of a new vote on May's deal when the indicative votes suggest she will not win?

So I am hearing that May wants another vote on her deal tomorrow.

When she held her last vote recently, 391 voted against and only 242 voted for.

Yesterday, indicative votes were held. Here are the results. 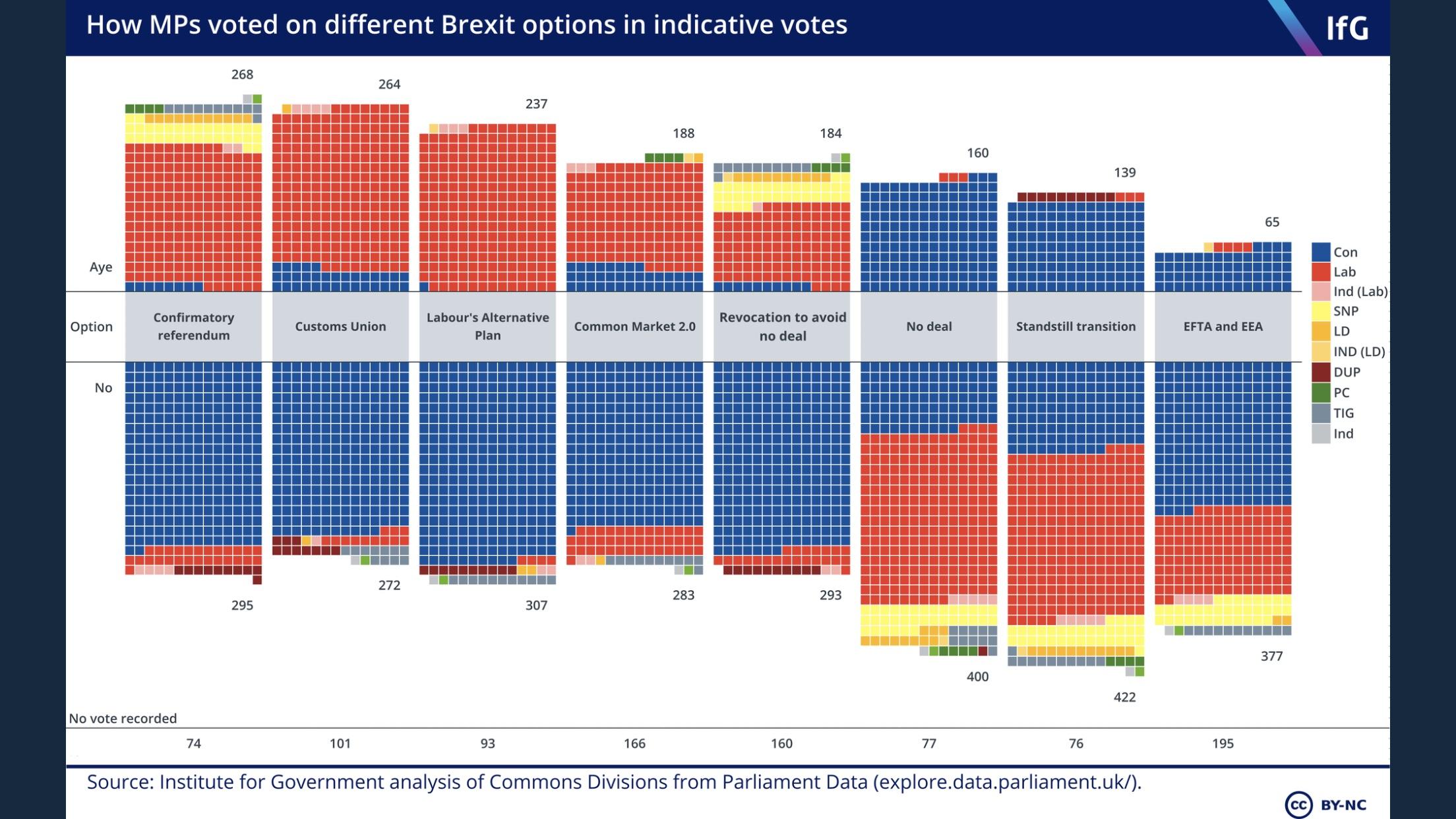 So, about 268 support a referendum. So we can assume that at least 268 will vote against May's deal if another vote were held.

However, most importantly, 160 voted in favor of no-deal, and there is no overlap between this group and those that want a new referendum (one group is many Labor-party, the other group is mainly Conservatives). These must be those Conservatives who dislike May's deal so much that they'd rather embrace a no-deal. So they will vote against her too.

160 + 268 = 428 votes against her deal. So the indicative votes suggest that she has pretty much already lost. Even if 1 hundred of those who prefer no-deal to May's deal changed their mind, May still wouldn't win.

So why does she want another vote when it is clear it cannot win?

It's not clear that supporters of no-deal will refuse to back May's deal at the 3rd time of asking. The indicative votes in particular allowed MPs to support several positions, some of which are mutually contradictory. If given a choice between deal vs remain then some of the "no-deal" supporters may fall into line with the Government position.

The BBC has a tool that will allow you to see how any MP voted in the indicative votes. If you enter Boris Johnson in here, you'll see he backed only No-deal or the so-called Malthouse 2, which other answers on the site explain is unacceptable to the EU.

And here you have Johnson explaining why he will back May's deal in Meaningful Vote 3. And Rees-Mogg saying he will back the deal if the DUP will, which is a little like saying he'll support it if it will pass.

So in summary MPs can and have changed their positions on May's deal between votes 1 and 2, votes 2 and potential 3 and since yesterday's indicative votes and today. All of which may add up to enough support to push the deal over the line.

The elephant in the room here is the conclusion of meeting of the European Council last week, in response to the UK's request to extend the Article 50 negotiation period beyond the 29th March. The third bullet point is the relevant one here:

This effectively makes Friday the 29th into a mini deadline to do something which can be presented to the European Council as House of Commons approval of the withdrawal agreement. Precisely what this is going to be won't be clear until the Government announces precisely what motion is to be debated and voted on, but given the previous decisions by the Commons Speaker John Bercow, it's conceivable this won't actually be the same vote as last time.

May is hoping that MPs will feel they have no choice but to support her deal to avoid a no-deal crash out, which they think is even worse.

Now that the indicative votes have failed to produce a majority for anything, she seems to think that the time is right to put her scheme into action.

Not the answer you're looking for? Browse other questions tagged united-kingdom theresa-may .

17
Does “government” mean something different in British and American English?
18
What will happen if Parliament votes “no” on each of the Brexit-related votes to be held on the 12th, 13th and 14th of March?
6
How could May pull off a 4th vote on her Brexit deal?
28
Are British MPs missing the point, with these 'Indicative Votes'?
6
What is a “confirmatory” referendum in the context of Brexit?
2
Was the referendum on the Good Friday Agreement called “confirmatory” at the time?
0
Did any Conservative MPs indicate that they might vote against May?
10
Can a 'Second Referendum' on Brexit contain three options?