Why do American farmers buy tractors from John Deere?

Farmers operating John Deere tractors have been fighting against John Deere's repair monopoly for years. Device manufacturers don't want people repairing their own stuff and they've taken pains to make it difficult to do so. Newer John Deere equipment comes loaded with software and firmware that make it impossible for farmers to fix their own equipment. Instead, they have to call an authorized dealer and wait for them to show up -- a fix that's too slow and too costly for a farmer.

Why even buy a tractor (or other equipment) if you have this problem? I have not heard about this problem in EU, Canada and so on. Is this unique to America? Hence my question, why do American famers even buy tractors from John Deere?

It required drilling down into these articles several layers (about 12) to find the relevant information.

First, the issue they complain about above only applies if the repair is with the computer itself. If the issue is mechanical, you're more than welcome to fix it, or have someone else fix it.

John Deere is claiming that to "hack" the software locks would allow people to reverse engineer their proprietary software, which has been held to be true for other digital software, such as online games and tax software.

This is very similar to the fight over "Right to Repair" for motor vehicles, which would force car manufacturers to release all of the same information to anyone who wants to purchase it, as they do to their own, licensed service facilities. (This is a state issue, so that is broadly generalized as what the proposed laws actually require is different between states.)

Slash Dot and Wired seem to be all over this, but their coverage appears to me, at least, to be a tad alarmist.

But a big California farmers’ lobbying group just blithely signed away farmers’ right to access or modify the source code of any farm equipment software.

In 2018 California has proposed legislation for Right to Repair and a lobbyist group agreed to the following exemptions: 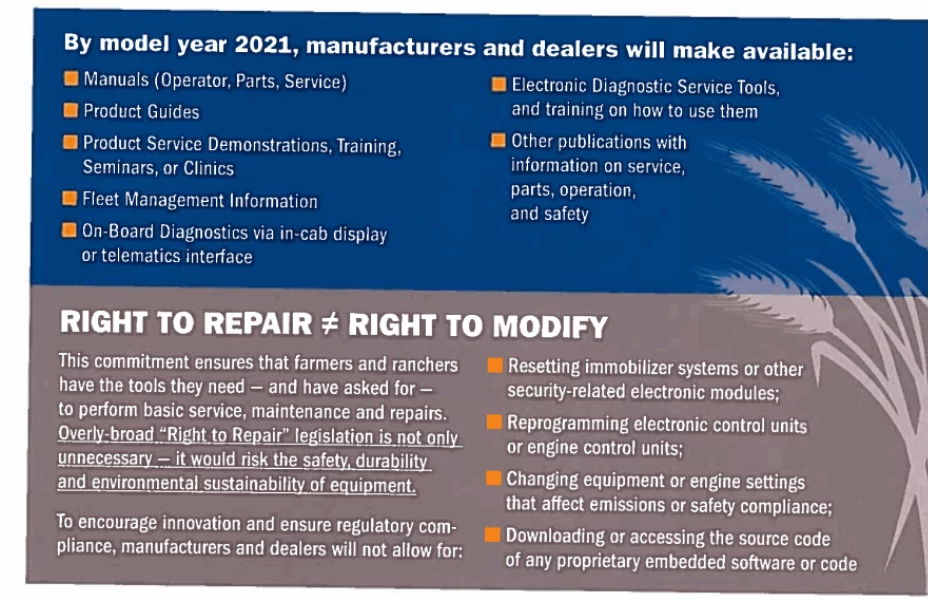 It is worth noting, for full disclosure, that the Clean Air Act actually requires electronic emissions monitoring and diagnostics for motor vehicles, so for cars, motorcycles, and buses at least, the option of just going to a car manufacturer that doesn't make onboard computers doesn't exist in the US.

Not the answer you're looking for? Browse other questions tagged economy agriculture .

8
Who authorizes the $12B in emergency aid to farmers and where does it come from?
21
Does the European Union buy soybeans?
6
How were farmers affected by demonetization in India?
8
Why would a company invest in American infrastructure based on one administration?
3
Are there political reasons why the Chinese government doesn't or is not allowed to buy U.S. stocks?
6
How big is the total bailout (“trade aid”) that Trump gave to US farmers since the trade war began?
11
What are the law changes farmers in India are protesting about