What is the motivation for a specifically $15 per hour minimum wage?

In the United States, various politicians and activists are advocating for a $15 per hour minimum wage.

However, I'm not sure how this value was chosen. One reason given for increasing the minimum wage is that it's fallen behind its peak value due to inflation. However, the $15 figure isn't equal to the real value of the minimum wage when it was first established (about $4) or its peak value (about $11). It also seems to be lower than the average national living wage.

What's behind the choice of the specific figure of $15 per hour in particular?

Apparently if you adjust for both inflation and productivity growth it should be even more: $20. So $15 is some kind of compromise:

I managed to track down the (brief) 2012 CEPR study on which that is based. I don't claim its calculations are correct, but the $15 figure is derived by splitting the productivity gain in half.

And the other tack is a cost of living calculation; I found a 2017 one for Illinois:

Given that the latter seems to be the data & reasons advanced in publications closer to the actual legislative proposals, I think this is probably the main argument, but I'm not sufficiently familiar with the matter to 100% conclude this.

As for the Federal level, I haven't found any living cost analyses indicating this precise figure. It seems it was more of a political thing, based on Bernie Sander's (2016) proposal:

“Democrats believe that the current minimum wage is a starvation wage and must be increased to a living wage,” the new plank reads. “We should raise the federal minimum wage to $15 an hour over time and index it, give all Americans the ability to join a union regardless of where they work, and create new ways for workers to have power in the economy so every worker can earn at least $15 an hour.”

Hillary Clinton's campaign added the words “over time” to original amendment, which was sponsored by former Ohio Sen. Nina Turner, a Sander ally.

The amendment was passed overwhelmingly by the 187-member Democratic Platform Committee.

Someone more familiar with the Democratic party may be able to find some internal documents with some kind of economic analysis, but I'm not sure they exist.

In a 2017 speech Sanders did bring up the "since 1968 ... the minimum wage lost 25% purchasing power" argument. So it seems somewhat similar to the OP's argument (which won't get to $15); later Sanders says something like "we know you can't make it on $12/hour". So it seems a standard-of-living argument, but it doesn't get anymore detailed than that, in that particular speech anyway.

The article in which that speech is embedded, also mentions that

Service Employees International Union launched the “Fight for $15” movement in 2012.

... from where Sanders eventually got his proposal. Interestingly, the year when that effort was launched by the service union coincides with the year for my 2nd quote, the brief CEPR paper. I don't know if this is causal (one way or the other), or just a coincidence.

Here's one of the earlier articles on this I could find, from Aug 2015:

In New York, a panel appointed by Governor Andrew Cuomo ruled that the state’s 180,000 fast-food workers should be paid a minimum of $15 an hour, in response to protests and pressure from Fight for $15.

Scott Courtney, the Fight for $15’s chief strategist, is helping to steer the movement through the Service Employees International Union, the union that has spent tens of millions of dollars underwriting the campaign. But Courtney has bigger ideas to expand on the notion of unionization.

If someone is inclined to dig into this further, they could look at that panel (did they write a report?) and/or how SEIU decided to back up the specific number. The latter might be a lot harder to find out... especially since there's a lot of time between 2012 and 2015.

The movement has no official name, though each city-level campaign has one: Fast Food Forward in New York, Raise Up MKE in Milwaukee, We Can’t Survive on $7.35 in St. Louis, Stand Up KC in Kansas City, and, in Chicago, Fight for 15 (which refers to a $15 minimum wage and has become the name most commonly used for the national campaign).

So at the level of slogans, "Fight for 15" won in a Darwinian selection. Also the movement did not really start asking for $15, but rather for $10:

Sidney (not his real name) says that when Action Now hired him in November 2011, it was to join a campaign to raise the minimum wage. For the first few weeks, organizers armed with postcards calling for a $10-an-hour state minimum wage prowled fast-food and retail joints in the Loop in downtown Chicago and gathered names, phone numbers, emails and home addresses to meet daily quotas.

On January 19, 2012, SEIU headquarters contributed $191,797 to Action Now, the first in a series of donations that would total more than $3 million by year’s end.

Apart from SEIU's involvement at this early state (merely 2-3 months after the fight for $10 (not $15) began, I wasn't able to find much, in particular how the jump from $10 to $15 in claims happened. Perhaps Denis' answer is correct on that.

The number was pulled out of nowhere, and slapped on a cardboard sign

Contrary to what the other 3 answers so far are suggesting, it is not linked, in any way, to inflation-adjusted wages or other fancy reasons. Rather, the number was literally pulled out of nowhere on the basis of being higher than $10, and slapped on a cardboard sign during late 2012 rallies in NYC.

Workers and organizers used the number as a slogan a few years back, thinking let's shoot for the moon, when in reality they were hoping to get something closer to $10-12/hour at the time.

And then one or two large corporations unexpectedly accepted to go with it and actually pay $15/hour. Things spread like wildfire when it dawned on unions that they could actually demand it. And so it became a national call to arms of sorts.

Quoting a story with some first hand accounts of how it actually happened:

Organizers thought $10 an hour was a reasonable demand, Mr. Westin said, but workers were unimpressed. Their attitude, he said, was that “$10 is not going to get me anything. We need to go much higher.”

So in late 2012, workers at several restaurants in the city walked off the job and staged the first rallies for a $15 minimum wage, with the support of the Service Employees International Union and some local elected officials. [...]

Mr. Williams, who is running for city public advocate. He admitted that even he did not believe a $15 minimum wage was realistic. “I actually thought that, O.K., maybe we’ll get $12,” he said.

(I've unfortunately no time to locate the specific source where I came across a first hand account of this. Edit: Thanks phoog for highlighting a good source!)

As far as I know, there are two main reasons for this value:

The value is a round number that approximates lower estimates of a living wage. Why approximate the lower estimates as opposed to an average? Fifteen dollars is already seen as politically impossible by many, so setting the goal there is a sort of compromise between an ideal solution and a more conservative, gradual change.

Fifteen dollars being a round number makes it easier to fight for - it's very hard to make up protest chants for $14.37! Twenty dollars is a monumental increase, ten dollars would leave many people (from a cynical point of view, especially in cities, where people are more likely to vote democrat) below a living wage, so fifteen is the easiest number to pick.
Once this idea was established, it was more likely to continue. The 'Fight for Fifteen' has good name recognition, and as it is enacted in more places, seems more reasonable and achievable to places where it is not yet established. Changing the value now risks diluting the messaging, making it less likely that any meaningful minimum wage rise should occur.

It is also generally worth noting that policy is often not shaped directly by the data, but by political realities and simply "what sounds good." Looking for hard data to justify precise figures, especially in big, headline policies, is not always a worthwhile endeavour.

An argument could be made that if the US merely matched its 1968 minimum wage, then all fruits of automation and productivity growth would be gained by the corporations and their existing shareholders, none by the workers. That would result in some degree of gradual growth in wealth inequality over time; which is problematic, since wealth inequality in America has already grown substantially beyond what it was in 1968. 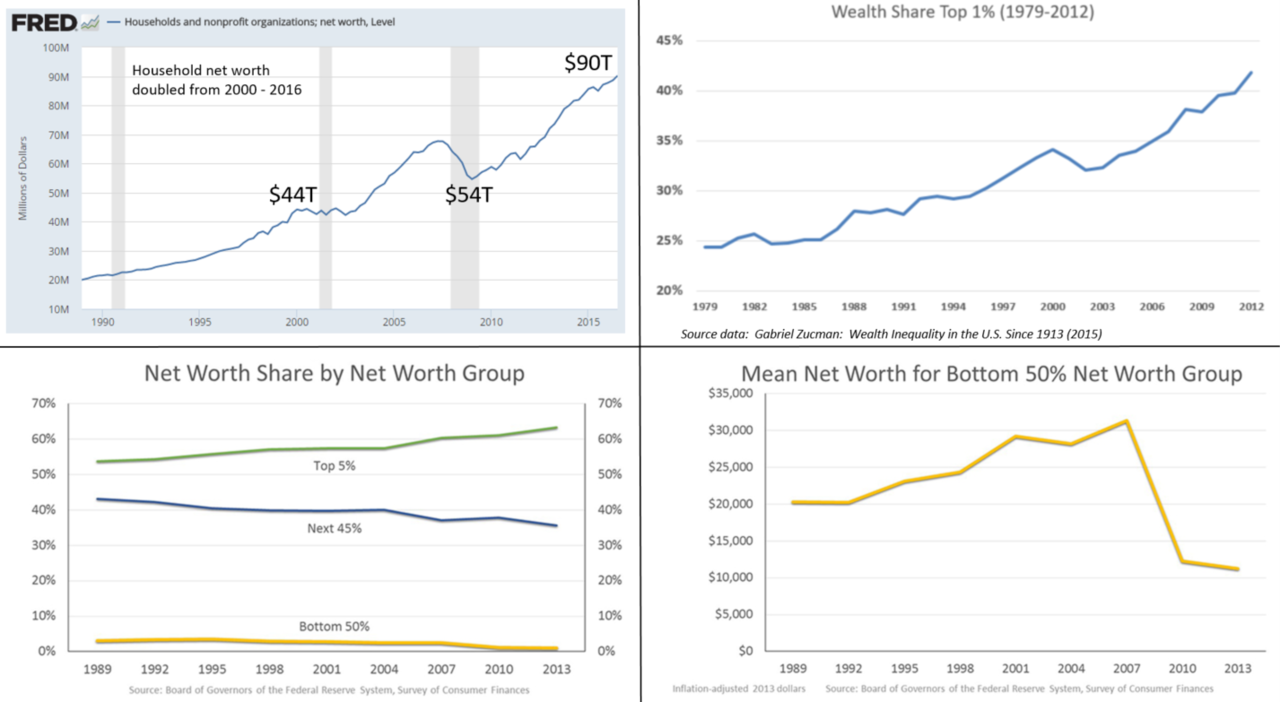 It's also plausible that by starting with an asking amount of $15/hour, they are hoping to shift the conversation about minimum wage to the point that conservatives and liberals might settle on a compromise around $11-13/hour. It might also help change the conversation so that areas of high cost of living like Seattle, NYC, and LA not be shy to raise the minimum wage to $15/hour.

My personal opinion on a minimum wage hike is that it would be accompanied by some amount of inflation, and annual inflation above 5% leads to hyperinflation. So I would prefer that the U.S. immediately implement a medium-sized minimum wage increase to about $8.50/hour, with accompanying judges that gradually raise it to $10.75/hour over the next 3 years, and $12/hour by 6 years.

Not the answer you're looking for? Browse other questions tagged united-states economy minimum-wage .