Which country benefited the most from UN Security Council vetoes?

By benefited I mean avoided any sort of a negative decisions that could have been made by the UN Security Council if a big power didn't use the veto, such as being condemned, criticized, sanctioned, etc.

You can find the list of vetoed resolutions on Wikipedia.

Many of the vetoes are related to the Middle East, with the US or Russia exercising their veto power for the benefit of a local ally. Other regular veto-inducing topics tend to be more localized in time -- vetoes on new memberships, Cyprus conflict, India-Pakistan conflict, South African apartheid, etc.

Cmd+F is a poor proxy to explore the data, because resolutions that benefit e.g. Israel don't always mention the latter explicitly, and you'll need to take the time to massage the data in order to get precise stats. But from cursory inspection, Israel seems to top your list, with over 20 vetoes in favor; and Syria, with a dozen or so vetoes in favor, seems like a good contender for second place.

Also, Fizz and Philipp are spot on in their comments that sometimes, resolutions don't even get voted on to begin with, because it's clear they'll get a veto. And as point out by Fizz, the stuff that gets put to a vote in such cases is often a case of using the vote as a public relations venue. So take these stats with a fistful of salt.

There are probably no stats exactly for what you ask, but the common examples of often vetoed issues are

One article says there were 35 USSR vetoes blocking new members; there's one case of USSR casting 15 such vetoes in one day on 13 December 1955. A Security Council's report phrases it (in its longer, research version) as

In the early years, the veto was cast primarily by the USSR, with a considerable number of these vetoes used to block the admission of a new member state due to concerns about the composition of the General Assembly in the context of the Cold War.

The formal reason why the General Assembly usually rejected the Soviet clients was a violation of article 4.

According to one source, well before the formal Negroponte doctrine, between 1970-1993 the US vetoed a Israel-related resolution 29 times; and that's out of 69 US vetoes in this time frame. How many such votes were cast varied a lot with the US presidency; e.g. a lot fewer were vetoed by the Carter administration (1) compared to Reagan's 18 vetoes. A more recent 2017 article claims that Israel benefited from 43 US vetoes at the UN. Even a Security Council's own report from 2015 says

Since 1970, the US has used the veto far more than any other permanent member, most frequently to block decisions that it regards as detrimental to the interests of Israel.

So I guess this bit is not too controversial, statistically.

The use of the veto by Russia and China rose considerably since 2011, with the conflict in Syria accounting for the bulk of these. Since 2011, Russia cast 17 vetoes, 12 of which were on Syria. Six of the seven Chinese vetoes during this period were over Syria and one was on Venezuela.

So that makes Syria a beneficiary of 18 vetoes recently. Bware however that there's an issue of double counting here, because some of these resolutions, more precisely 6 of the 11 resolutions on Syria vetoed until 2014 (see next source) were actually vetoed jointly by both China and Russia.

There's one 2014 press article by a University of Westminster lecturer with a breakdown by source and "beneficiary". 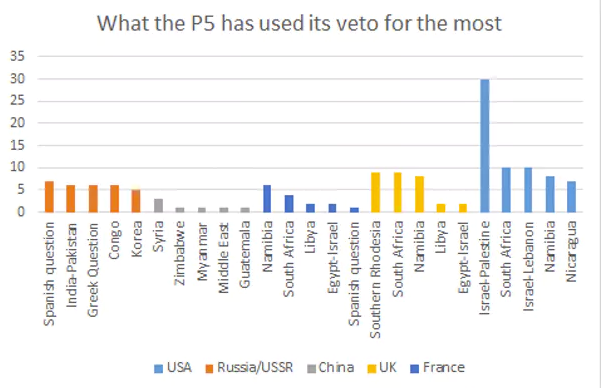 The data is sourced from the UN (obviously), but I think the breakdown is author's own work, although that's not made terribly clear in the article. The graph clearly excludes the votes against memberships of new countries; that shows you how difficult it is to produce meaningful research on this. And then there's the combined version by issue/beneficiary, but with same caveat: 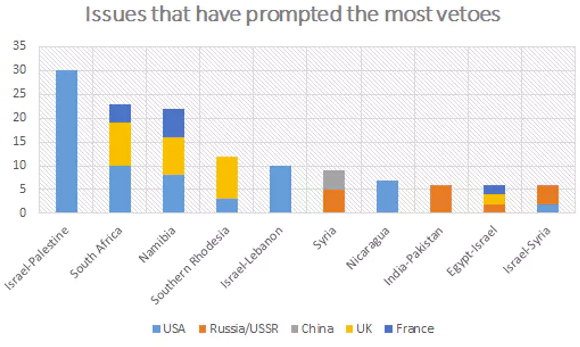 Also, I'm not sure if the issues with South-Africa and Namibia were entirely distinct given the long lasting South African Border War. Likewise for Southern Rhodesia. I guess someone could cluster these as "South Africa issue(s)". For balance though, the four Israel related-conflicts (with Palestine, Egypt, Lebanon, and Syria) are also split in that graph.

Resolutions on South Africa issue(s), including those relating to neighboring Namibia and Southern Rhodesia were also sometimes jointly vetoed by the US, UK, and sometimes by France as well. So there's some double or even triple-counting there. E.g. the very first US veto at the UN was actually jointed with that of the UK, on Southern Rhodesia.

Not the answer you're looking for? Browse other questions tagged united-nations veto .

53
Why did Israel vote against lifting the American embargo on Cuba?