How does the public know that many large corporations paid zero Federal tax last year?

So the press is reporting that many large corporations paid zero Federal taxes see here for 2018 under the tax act passed under the Trump Administration.

Considering the concern that people have about privacy of their tax returns, how is it that corporate tax returns are not considered private?

Considering the possibility that publicly traded corporations might be required to release their Federal Tax liabilities, is the same true for privately held corporations? (for example Cargill, Koch, Dell etc)

(asking this under Politics because of the political implications, both with regard to transparency of tax return handling and the political inquiry of the President's business returns)

It's not too clear what the question actually is, but public and private US corporations are held to different public-reporting standards regarding their taxes; the former need to apply GAAP, the latter do not:

A publicly traded corporation is required by law to disclose information about the company’s financial performance to its shareholders and the Internal Revenue Service. Although both private and public corporations are subject to the same reporting requirements under generally accepted accounting principles (GAAP), the standards largely apply to public companies. Many of the rules are not applicable to private companies, some of which elect to use income tax basis accounting rather than GAAP accounting for preparing financial statements they need to file a tax return. [...]

Any company that trades stock on a U.S. stock exchange must file quarterly earnings reports. The Securities and Exchange Commission -- a government commission that protects investors -- receives the reports. Since the goal of a public company is to increase profits for its shareholders, a publicly traded company is required to make complete financial statements available to its shareholders. Public companies typically follow GAAP principles and standards when recording tax and accounting information they use in preparing financial statements. [...]

Many of the accounting principles under GAAP are aimed at public corporations, as they are intended to ensure the fairness of U.S. securities markets. Financial reports provide shareholders with reliable financial information to help them make informed decisions about whether to buy or sell shares of stock. Private companies that are small to moderate in size tend to focus more attention on short-term cash flow planning, as they have fewer resources with which to work. Such companies are accountable to the IRS and not to the SEC or any other agency or entity, but they may nonetheless publish annual financial statements for internal use and to provide to external users such as bankers and creditors.

This GAAP tax data is published in the company's 10-K form (filed with the SEC), normally under items 6 and 8. You can look at an example; search for "taxes on income" in the document. They may even calculate their effective tax rate (for you), e.g. 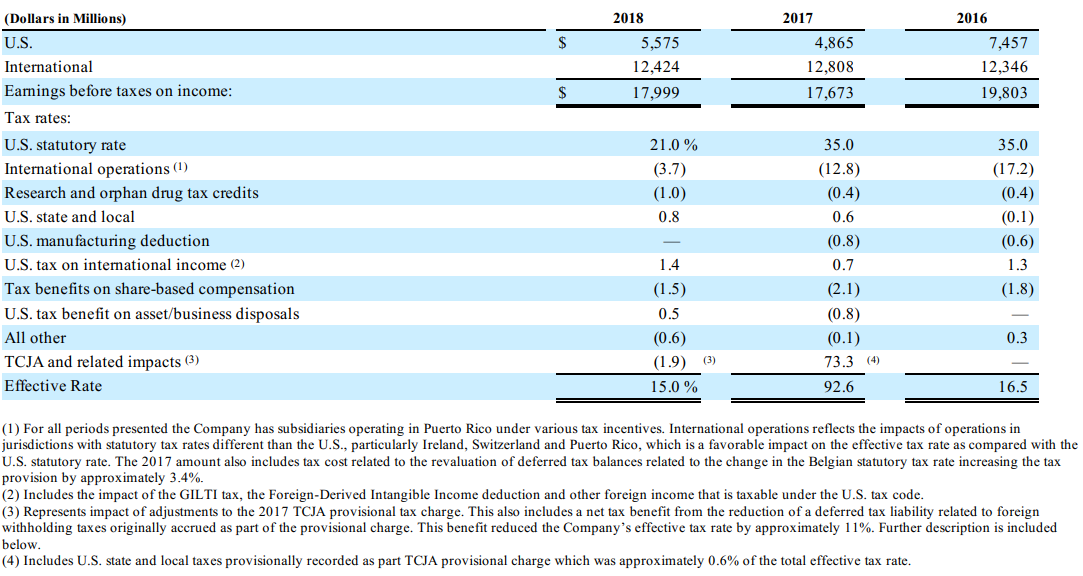 If anybody wonders what the large 2017 charge was for... it was for undistributed earnings from foreign subsidiaries repatriated after TJCA.

I'm not entirely sure about this, but one article says a shareholder in a corporation that is not publicly traded may ask to see the corporation's tax records (on site), but such requests may be denied, and the only recourse is a civil lawsuit. I guess it's left somewhat vague because legislation in this matter may differ from state to state, i.e. there probably aren't any federal regulations covering this.

Not the answer you're looking for? Browse other questions tagged united-states taxes privacy corporations .

7
What benefit does Ireland get for the tax policies that faciliate the "Dutch Sandwich"
1
Why does Tax Freedom/Cost of Government day differ so much in the United States, and how are they calculated?
1
How many WTO cases has the Trump administration launched (per year)?
10
Why does the US federal debt increase by more than the US deficit each year?
6
Why not demand President's/candidate's financial records instead of tax returns?
9
Brexit, EU tax evasion regulation, and the City of London
10
How does the Speaker of the House know who's who?
32
How does Rita Hart know that 22 votes weren't counted?
4
Why are new mothers apparently excluded from receiving the 2021 monthly "Advance Child Tax Credit Payments" if they filed taxes last year?