What reasons (if any) were given by Democrats when the Ways and Means chairman requested Trump's tax returns?

This is fundamentally the same question as another one recently asked here, but unlike that (quickly closed) formulation I won't try to [pre]provide any counter-arguments to the Democrats' recent demand expressed by the House Ways and Means Chairman. (Someone could and probably should ask the corresponding question: how has Trump's team responded to the demand and what counter-arguments did they provide.) But one thing at a time...

So, bare question: how have the Democrats politically justified the recent demand(s) of House Ways and Means chairman for Trump's tax returns?

For some background on the law provisions authorizing that demand, see Is there a documented rationale why the House Ways and Means chairman can demand tax info? But note that the political justification for the current demand in not explicitly covered there.

N.B. the BBC article linked at the top of that question also says:

Every US presidential candidate since 1976 has released their tax returns, but there is no law requiring it. Democrats claim the request is both legal and necessary.

But it doesn't get into anymore details. I'm hoping there is more detailed argumentation on the Democratic side that can be provided in answers here.

I did find a reference and snippets from a statement made by Neal (the HWM chairman) in connection with the first/initial request in AP news:

Democrats insist that obtaining Trump’s tax filings falls within their mandate of congressional oversight. Republicans have denounced it as a political witch hunt and invoked privacy concerns.

“We have completed the necessary groundwork for a request of this magnitude, and I am certain we are within our legitimate legislative, legal and oversight rights,” Neal said in a statement Wednesday evening.

The IRS has a policy of auditing the tax returns of all sitting presidents and vice presidents, "yet little is known about the effectiveness of this program," Neal said in the statement. "On behalf of the American people, the Ways and Means Committee must determine if that policy is being followed, and if so, whether these audits are conducted fully and appropriately."

Neal continued, "In order to fairly make that determination, we must obtain President Trump's tax returns and review whether the IRS is carrying out its responsibilities."

So, basically, this demand was presented (by the Democrats) as an investigation into the fairness and consistency of IRS audits of presidents and vice-presidents.

And not really part of my question, but since it was also quoted there, the Republican counter-argument was

Rep. Kevin Brady of Texas, the senior Republican on the Ways and Means panel, denounced the move as “an abuse of the tax-writing committees’ statutory authority.”

“Weaponizing our nation’s tax code by targeting political foes sets a dangerous precedent and weakens Americans’ privacy rights,” Brady wrote in a letter Wednesday to Treasury Secretary Steven Mnuchin, who oversees the IRS. “As you know, by law all Americans have a fundamental right to the privacy of the personal information found in their tax returns.”

Here is the Chairman Neal's original April 3 original request letter, followed by a press release of the same day, followed by Neal's follow-up letter of April 10: 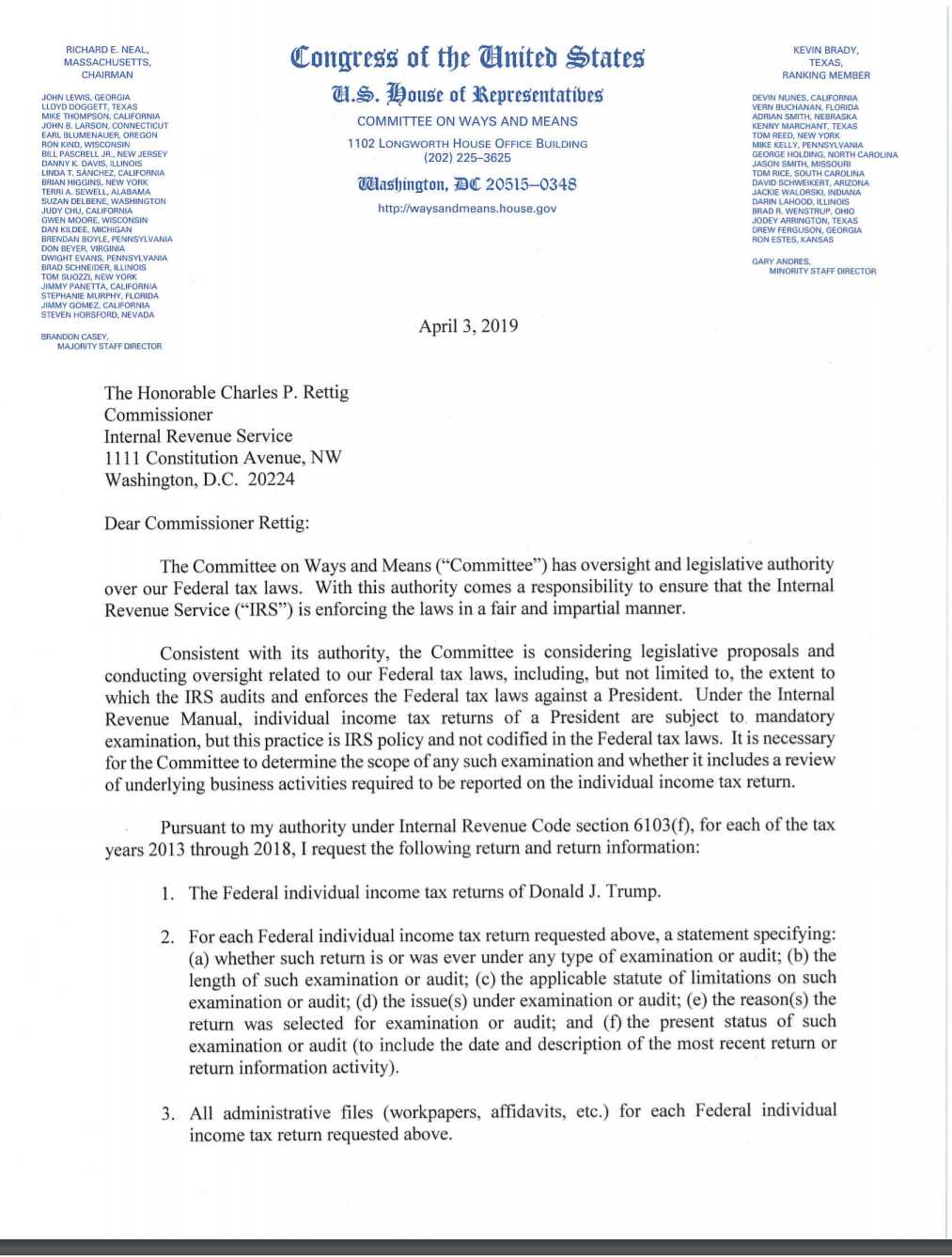 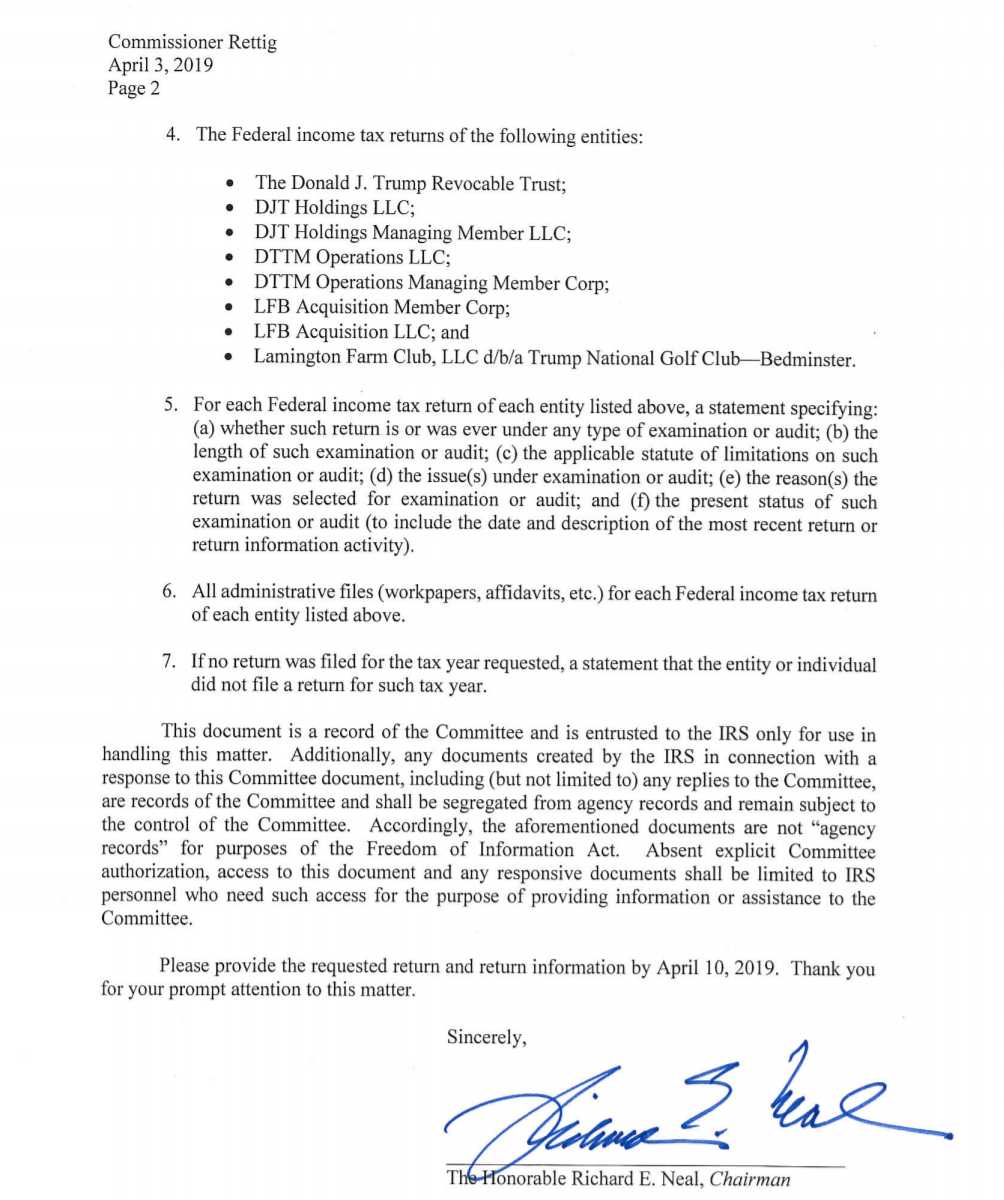 “It is critical to ensure the accountability of our government and elected officials. To maintain trust in our democracy, the American people must be assured that their government is operating properly, as laws intend.

“Congress, as a co-equal branch of government, has a duty to conduct oversight of departments and officials. The Ways and Means Committee in particular has a responsibility to conduct oversight of our voluntary Federal tax system and determine how Americans – including those elected to our highest office – are complying with those laws. It is also our duty to evaluate the operation of the Internal Revenue Service in its administration and enforcement of the tax laws.

“The IRS has a policy of auditing the tax returns of all sitting presidents and vice-presidents, yet little is known about the effectiveness of this program. On behalf of the American people, the Ways and Means Committee must determine if that policy is being followed, and, if so, whether these audits are conducted fully and appropriately. In order to fairly make that determination, we must obtain President Trump’s tax returns and review whether the IRS is carrying out its responsibilities. The Committee has a duty to examine whether Congressional action may be needed to require such audits, and to oversee that they are conducted properly.

“I today submitted to IRS Commissioner Rettig my request for six years of the president’s personal tax returns as well as the returns for some of his business entities. We have completed the necessary groundwork for a request of this magnitude and I am certain we are within our legitimate legislative, legal, and oversight rights.

“I take the authority to make this request very seriously, and I approach it with the utmost care and respect. This request is about policy, not politics; my preparations were made on my own track and timeline, entirely independent of other activities in Congress and the Administration. My actions reflect an abiding reverence for our democracy and our institutions, and are in no way based on emotion of the moment or partisanship. I trust that in this spirit, the IRS will comply with Federal law and furnish me with the requested documents in a timely manner.”

On April 3, 2019, pursuant to my authority under section 6103(f) of the Internal Revenue Code (“IRC”), I requested that the Internal Revenue Service (“IRS”) furnish certain return and return information by April 10, 2019. As I explained in my earlier letter, that request is in furtherance of consideration by the Committee on Ways and Means (“Committee”) of legislative proposals and oversight related to our Federal tax laws, including, but not limited to, the extent to which the IRS audits and enforces the Federal tax laws against a President.

I am aware that concerns have been raised regarding my request and the authority of the Committee. Those concerns lack merit. Moreover, judicial precedent commands that none of the concerns raised can legitimately be used to deny the Committee’s request.

First, it bears noting that the statutory language of section 6103(f) is unambiguous and raises no complicated legal issues that warrant supervision or review by the Department of the Treasury (“Treasury”) or the Department of Justice (“Justice”). Section 6103(f) commands that “[u]pon written request from the chairman of the Committee on Ways and Means of the House of Representatives . . . the Secretary shall furnish such committee with any return or return information specified in such request.” 26 U.S.C. § 6103(f)(1) (emphasis added). It is a well-established principle of statutory interpretation that words that are neither terms of art nor statutorily defined be given their ordinary meaning. Here, the statute’s use of the “mandatory ‘shall’ . . . creates an obligation impervious to judicial discretion.” Lexecon, Inc. v. Milberg Weiss Bershad Hynes & Lerach, 523 U.S. 26, 35 (1998); see also, e.g., EPA v. EME Homer City Generation, 572 U.S. 489, 509 (2014); Barnhart v. Sigmon Coal Co., 534 U.S. 438, 461-62 (2002) (courts “must presume that a legislature says in a statute what it means and means in a statute what it says there.” (internal quotation marks omitted)).

Second, there is no valid basis to question the legitimacy of the Committee’s legislative purpose here. The Supreme Court has instructed that Congress’s power to investigate is “broad” and “encompasses inquiries concerning the administration of existing laws as well as proposed or possibly needed statutes.” Watkins v. United States, 354 U.S. 178, 187 (1957).

It is not the proper function of the IRS, Treasury, or Justice to question or second guess the motivations of the Committee or its reasonable determinations regarding its need for the requested tax returns and return information. Indeed, the Supreme Court has consistently noted that the motivations underlying Congressional action are not to be second guessed, even by the courts. Eastland v. U.S. Servicemen’s Fund, 421 U.S. 491, 509 (1975) (“The wisdom of congressional approach or methodology is not open to judicial veto.”); Watkins, 354 U.S. at 200 (“But a solution to our problem is not to be found in testing the motives of committee members for this purpose. Such is not our function.”); Barenblatt v. United States, 360 U.S. 109, 132 (1959) (“So long as Congress acts in pursuance of its constitutional power, the Judiciary lacks authority to intervene on the basis of the motives which spurred the exercise of that power.”).

Courts have held that, where “a rational legislative purpose is present for investigating a particular person, organization, or institution[,] [t]here is no requirement that every piece of information gathered in such an investigation be justified before the judiciary.” McSurely v. McClellan, 521 F.2d 1024, 1041 (D.C. Cir. 1975); see also Townsend v. United States, 95 F.2d 352, 361 (D.C. Cir. 1938). “A legislative inquiry may be as broad, as searching, and as exhaustive as is necessary to make effective the constitutional powers of Congress.” Townsend, 95 F.2d at 361. Furthermore, the Supreme Court has expressly recognized that “[t]o be a valid legislative inquiry there need be no predictable end result.” Eastland, 421 U.S. at 509.

Third, concerns about what the Committee may do with the tax returns and return information are baseless. As my April 3rd letter noted, this request falls squarely within the Committee’s oversight authority. It is well-established law in the D.C. Circuit that “[t]he presumption of regularity supports the official acts of public officers and, in the absence of clear evidence to the contrary, courts presume that they have properly discharged their official duties.” Sussman v. U.S. Marshals Serv., 494 F.3d 1106, 1117 (D.C. Cir. 2007) (citation omitted); Exxon Corp. v. FTC, 589 F.2d 582, 589 (D.C. Cir. 1978) (“committees of Congress will exercise their powers responsibly and with due regard for the rights of affected parties.”). In other words, the IRS, Treasury, and Justice must assume that the Committee Members, like all government officials, will act properly in the conduct of their official duties.

To date, the IRS has failed to provide the requested return and return information despite an unambiguous legal obligation to do so under section 6103(f). I expect a reply from the IRS by 5:00 p.m. on April 23, 2019. Please know that, if you fail to comply, your failure will be interpreted as a denial of my request.

Thank you for your prompt attention to this matter.

So there you have the full official record, herein Chairman Neal states his authority to receive the requested documents, explains that the Committee has legislative need.

Not the answer you're looking for? Browse other questions tagged united-states president taxes house-of-representatives .

26
Is there a documented rationale why the House Ways and Means chairman can demand tax info?

11
Would Obama viewing Trump's tax returns be seen as overstepping his authority?
8
When and how were the current US and EU tariffs on cars decided?
87
What does it actually mean for the Republicans to have lost the House of Representatives?
2
PAYGO rules vs the PAYGO act of 2010
26
Is there a documented rationale why the House Ways and Means chairman can demand tax info?
9
Is the President of the United States bound by state laws?
6
Why not demand President's/candidate's financial records instead of tax returns?
6
What are the US House of Representatives rules on holding a non-cooperating witness in contempt of Congress?