Why did Roosevelt decide to implement a maximum wage through taxation rather than a simple ceiling?

In fact, such a tax was not wholly implemented. It reached a maximum of 94% in 1944 and hovered around 90% for the next two decades!

This suggests it was a popular measure.

This, in essence, is a proposal for a maximum wage. Why was it implemented through the tax code rather than simply stipulating a simple ceiling?

Obviously, a tax has the significant advantage of providing money to the government, something that a ceiling simply does not do. Unsuprisingly, many presidents would prefer to have more money to allocate to their preferred budgetary purposes. In Roosevelt's case, this was World War II. Roosevelt all but said this explicitly in his April 27, 1942 fireside chat:

Are you a business man, or do you own stock in a business corporation? Well, your profits are going to be cut down to a reasonably low level by taxation. Your income will be subject to higher taxes. Indeed in these days, when every available dollar should go to the war effort, I do not think that any American citizen should have a net income in excess of $25,000 per year after payment of taxes.

As always with politicians, it's difficult to say what his true motivations were. However, though Roosevelt is largely remembered for his social programs, he also was very dedicated to the American war effort, so this wouldn't have been out of character for him.

Inflation was also a concern. Roosevelt's treasury used this as an argument for the tax:

In late 1943, Treasury Secretary Henry Morgenthau asked Congress for another tax increase. He framed his appeal, in large part, as an anti-inflation effort. The new act, he argued must help stop inflation. "[N]othing in the economic field can interfere with the war effort as much as an uncontrolled rise in prices," he told the House Ways and Means Committee. "An inflationary price rise is a source of grave social injustice. It undermines morale and impedes war production. It strikes at random without consideration of equity or ability to bear the hardships which it imposes. Once it has acquired momentum, inflation is extremely difficult to control, and leaves a heritage of post-war stresses and strains that will haunt us for decades."

Now, if a direct wage ceiling were imposed, companies, unable to spend that money on attracting more highly-paid CEOs, might spend it on competing for labor lower on the company totem pole. This would lead to more money in the pockets of somewhat lower-paid workers, which might be a nice thing for income inequality, but could lead to excessive spending and spur on inflation. I'm not sure how plausible this justification is, though: since the taxes were intended to be put back into the economy through military spending, it's possible they could have had the same effect.

If he just wanted to have a maximum wage of $1,000/hr, he probably could have just passed a law stipulating it. However, FDR was trying to create a maximum income, not a maximum wage. The government liming the total of dividends from stocks, interest from bonds and appreciation on homes via a legal maximum would be confiscatory and therefore unconstitutional. However, the government does have the ability to tax due to the 16th amendment.

This is also why Obama (and the Congresspeople working with him) did not add a fine for not buying healthcare - they created a tax (the Shared Responsibility Payment).

I'll leave aside questions about whether it's prudent to have such a measure in place. If you want to discuss that (and you seem to), I recommend creating another question.

There are multiple reasons, which I could think of, for not implementing such a move in any country.

If a capable gifted worker reaches the maximum earning threshold, the government rules ensure he doesn't produce any more. This is a negative for the country as a whole. If such an individual is allowed to grow further, he would venture into other areas and will take additional risks to produce better products. In the process, he will spend more on infrastructure and other goods, causing a natural growth in demand throughout the economy.

Companies cannot hire better management executives. There is no incentive for people to accept additional challenges, upon reaching the earning threshold. This stagnates the movement of skilled people venturing into unknown territories. Innovation takes a hit as people grow complacent to changes.

If a person reaches earning threshold, he starts to conceal some of his income, to save some additional money from the Tax Man. This causes lots of money being moved into the black market, essentially encouraging under the table transactions everywhere. There won't be any invoices for goods purchased or sold. The whole society moves into No invoice system. No one will pay any taxes. All business people will deal only in cash. Essentially encouraging to commit financial crimes to have what you earned legitimately.

Those who are slightly ethical will immediately start a company on his family members names and starts to move income to their partners/children's names/companies. Essentially, trying to escape from enforced threshold levels legitimately. Determining such actions is extremely complex and consumes a lot of resources, and often with family members being partners in crime, they aren't going to lose. People will find new ways to break the enforced threshold levels. (Not applicable for salaried people, but for those who are in business)

Cheating & fraud will be the only game in town, to survive. The one who cheats is allowed to grow more and the one who is honest will have to stay low. What message does it convey to the others of the nation? Cheating and fraud will propagate every nook and corner of the economy. If such a move happens, there isn't a way back to honesty. For-ever.

Ceiling one's income through taxation will have similar outcomes unless you let the individual keep some of his legitimate earnings.

If you don't let people grow, Musk would have ended his career at PayPal. There wouldn't be a "Tesla", or a "Solar City" or a successful space program. No Auto-pilot cars, etc. Today, he is a role model to millions. If you enforce ceilings on income, There wouldn't be any role models for future generations to emulate. There will be only fraudsters.

There's actually very little functional difference between a high marginal tax rate and a wage ceiling. The Laffer curve is an idea in economics that stems from the idea that at a tax rate of 100%, no one works and that at a tax rate 0% everyone works what they naturally would, but somewhere in the middle people start to work less (fewer hours, less risk, less education, less hard) to make less money since it's not worth it. The curve is a relationship between government revenue and tax rate. At 0% tax rate revenue is 0. As tax rates increase, revenue increases, but at some point tax rates get too high and too many people start not working so revenue decreases. Eventually at 100% tax rate revenue is again zero. People on the left and right agree with the rough shape of the curve, but sometimes disagree with where exactly increasing taxes starts to reduce government revenue. Below are some possible shapes for the curve: 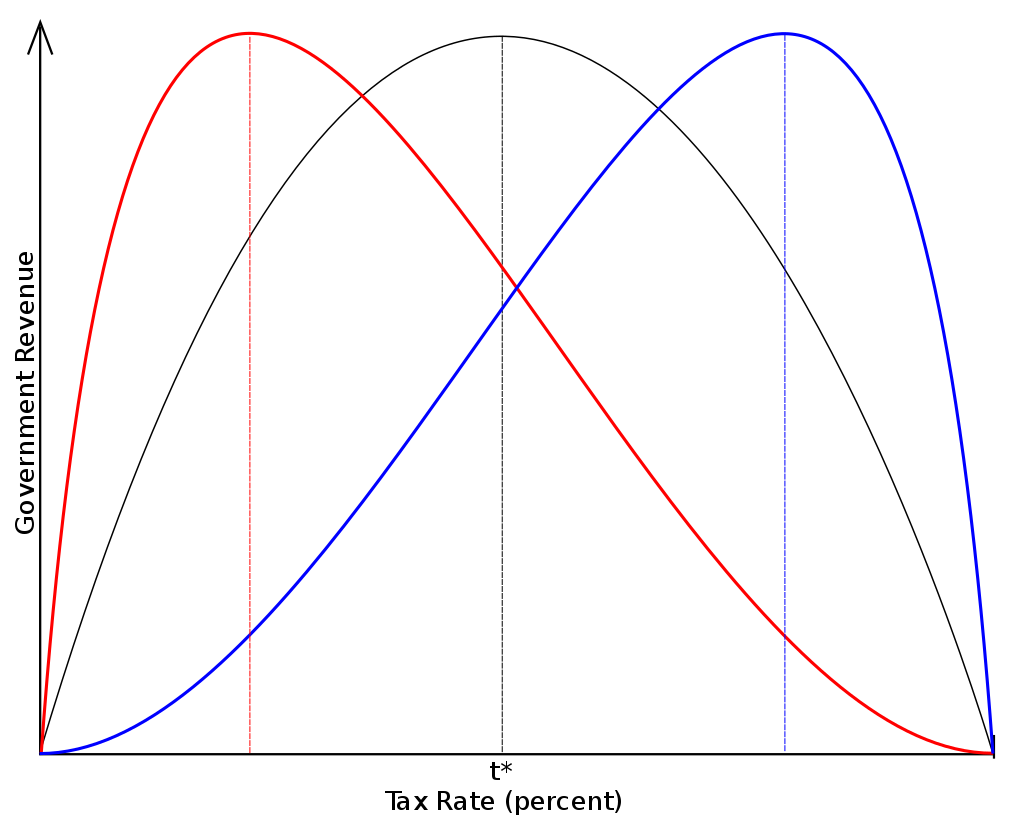 In an effort to maximize revenue, every country in the world currently has a top marginal tax rate of below 60%. Even very egalitarian nations like Sweden don't want rates so high that they reduce the money available for public spending. A 90% top tax rate results in people taking home just a quarter of the money they would receive compared to the highest tax nations on earth today. A 90% top marginal tax rate severely disincentivizes people making money past the cutoff, to the extent that it functionally acts almost the same as a wage ceiling.

It was most probably easier.

Setting tax rates is something that governments do all the time. Yet, setting a maximum limit on the wage you could be paid-out, is a very tricky proposition. Especially in the US with its traditional high evaluation of individual freedom. I guess it would have been legally straight impossible for FDR do impose a wage cap on private businesses.

I am interested in any more in-depth views of people who actually know the US law.

Not the answer you're looking for? Browse other questions tagged united-states economy taxes inequality .

4
Why did Obama decide to expel Russian diplomats?
5
Why are public TV and radio channels in some countries licensed through TV fees, rather than directly from the budget?
11
Why did Richardson and Ruckelshaus resign during the Watergate "Saturday Night Massacre", rather than simply refuse?
18
Why do some countries forbid working on Sunday rather than strictly regulating it?
2
Why is donation related taxation significantly smaller than inheritance taxation?
3
Why did the Trump administration separate families rather than deporting them together?
31
Why isn’t the tax system continuous rather than bracketed?
2
Why would a small country invest to reduce their greenhouse gas emissions, rather than adaptation to global warming?
6
Can Congress really raise or suspend the debt ceiling through budget reconciliation with a simple majority in the Senate?