Do any countries use a codified version of the "matter of confidence" of (former) UK tradition?

governments could designate a particular vote as being a ‘matter of confidence’ – which means they would consider a defeat a resigning matter. [This] mechanisms occurred by [unwritten] convention. [...]

The ability to say that a vote would be a ‘matter of confidence’ was a useful weapon used by prime ministers down the ages to keep their backbenchers in line and say that "this vote really matters".

This weapon has not been lost since governments or prime ministers can resign or threaten resignation at any time. The difference now is that the Government or Prime Minister cannot so easily threaten the dissolution of Parliament and an election. The choices that need to be weighed are very different from the days before the Fixed-term Parliaments Act.

My question is simply: do any countries currently use a codified (i.e. written) version of the "matter of confidence" rule?

Apparently Canada used some version of it fairly recently

[there was] controversy in the recent series of minority parliaments from 2004 to 2011, where the Government often adopted the tactic of declaring all government bills matters of confidence in order to provoke the Opposition into withdrawing confidence from the Government, which would in turn seek fresh elections.

But it was apparently still a matter of uncodified convention

By constitutional convention, the Prime Minister and the Cabinet are able to exercise authority only with the consent and approval (“confidence”) of the majority of the Members of the House of Commons.

Should the Government be defeated on a confidence question, under this convention the Prime Minister would normally be required to submit his or her resignation to the Governor General. The Governor General may either dissolve Parliament with a view to a general election or, much more rarely, invite the leader of another party in the House to form a new government.

The confidence convention is a matter of parliamentary practice and tradition that is not written into any statute or in the Standing Orders of the House of Commons.

In Germany it is formalized as the Vertrauensfrage in article 68 and 81 of the Grundgesetz. In Germany motions of confidence are initiated by the government.

This can be coupled with any motion the parliament has to vote on if the chancellor decides so (German Wikipedia). This was used only once: in 2001 by Gerhard Schröder to force a decision about the participation of the German army in Afghanistan.

When they fail, it gets complicated:

Just to clarify things a little with Germany, and to add a more general perspective; the Huber model of confidence votes, as summarized by Döring and Hönnige (2005)

proceeds in four steps: Firstly, a cabinet minister proposes a policy. This policy can secondly either be accepted by the majority or rejected. In the latter case the majority proposes a refined policy which is either trying to avoid a vote of confidence or not. This refined policy can thirdly either be accepted or rejected by the Prime Minister who can then decide whether to use a vote of confidence to push his policy through. If he uses the vote of confidence, his majority has to decide in the fourth step to accept this policy or vote the Prime Minister out of office to avoid this unwanted policy (Huber 1996: 273). [...]

The Huber model relies on the assumption that a vote of confidence is decided upon by the simple majority of those voting (i.e. plurality). But we find three different voting rules in European countries, each of them has different effects on the likelihood of the Prime Minister to win a vote of confidence and the point he is able to choose ceteris paribus. The three voting rules are:

Huber states that Germany like France V is in the third category (1996: 271). This is not true. According to Article 68 of the constitution the Chancellor must win the votes of the majority of the members of the Bundestag, the so called Kanzlermehrheit, to survive a vote of confidence. Thus, like Spain, Germany is in the second category needing an absolute majority.

So Germany is roughly like the UK tradition in terms of article 68 of the Grundgesetz, but in a finer classification Spain and Germany belong in the same (separate) category and have somewhat different (tighter) rules for winning confidence votes.

With the caveat that this is pretty dated (and probably has some errors), here's Huber's (1996) summary table: 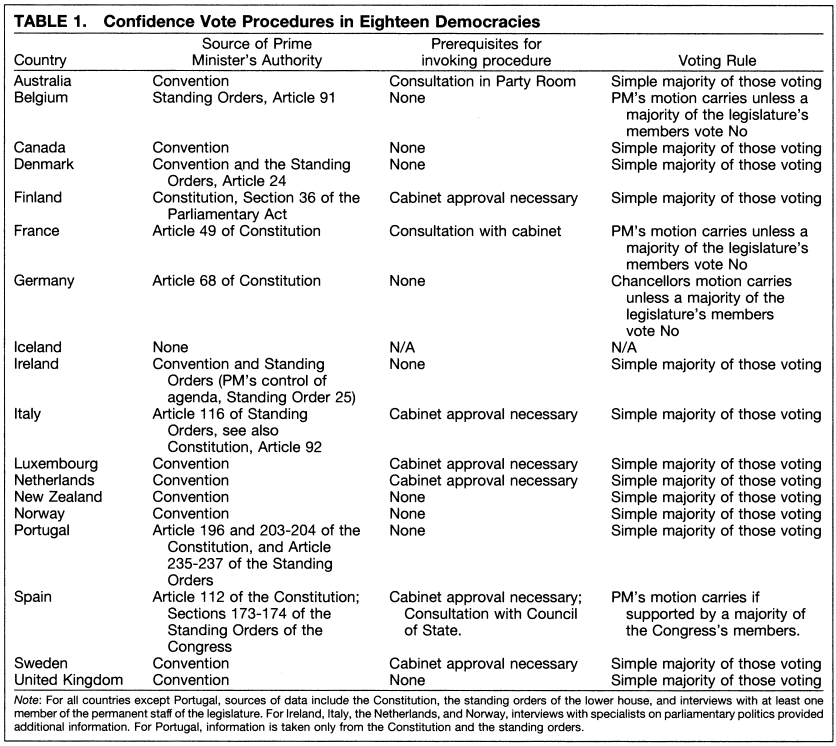 So there were (in 1996) at least a few other countries that had a "simple majority of those voting" confidence vote rule and that also a had a codified procedure either as laws, Standing Orders or a combination of both: Portugal, Italy, Denmark, Belgium and Ireland. The latter two didn't have any laws in this regard and relied only on Standing Orders.

But going back to Döring and Hönnige, another important issue is what happens if the government loses the confidence vote. Here we have another source of variation, which sets Germany aside:

The second major difference is the dissolution of parliament by the Prime Minister after he has lost a vote of confidence. The basic feature of the confidence vote and the theoretical models to understand it is the introduction of electoral cost in the considerations of members of the majority parties. Members who wouldn’t agree with the Prime Ministers policy are forced to accept it because he threatens them with dissolution of parliament, general elections and thus a possible loss of their seat. In Diermeier/Feddersen's (1998) understanding they choose between the control of a single policy and the control of all future policies. Hence, the whole idea of the vote of confidence procedure is based on the dissolution threat. This dissolution can be achieved by free will of the Prime Minister or enforced by tradition, the standing orders of the parliament or the constitution. While this is true for most countries, this is not true for Germany.

Indeed, two constitutional provisions define the situation here. The first one (Article 68) states that the Chancellor may ask the Federal President to dissolve Parliament. After this question, the Federal President may dissolve parliament or he may not. So, the decision to dissolve the Bundestag is not entirely in the hands of the Chancellor but in those of the President who in case of a lost confidence vote of the Chancellor regains some powers he was stripped off after the collapse of the Weimar Republic. In fact, a new veto player is introduced in the decision to dissolve and we find a nested decision. According to the second provision (Article 67) a chancellor can only be deselected by a constructive vote of no confidence which means, that a new chancellor has to be elected by secret vote. A lost vote of confidence on its own does not automatically lead to the resignation of the chancellor, dissolution of the parliament or the formation of a new government. Indeed, a German chancellor might loose as many votes of confidence as he likes to without any consequences (De Winter 1995).

There was a further development in Germany in 2005, not covered in that paper in a decision of the Constitutional Court. But this largely upheld the President's independent role:

the majority held that the decision of the German President regarding the dissolution of the Parliament must serve as a legitimate check on the actions of the Chancellor. The President ensures that the procedure has been taken in conformity with the Constitution. If the procedure has been correct, the President must also decide, in his or her discretion, whether the dissolution of the Parliament, the shortening of the legislative period, and other political consequences are proportional and whether he or she is willing to take the responsibility for them. In the present case, the Court summarily concluded that the President had not abused his discretion in approving the Chancellor’s requested dissolution.

It appears therefore that the Court, as in 1983, tried to square the circle: Both times a Chancellor had apparently asked for a vote of confidence with the hope of losing, merely in order to free the way for premature elections; both times the Federal Constitutional Court held that the mere desire for new elections was not a sufficient basis for the dissolution, yet in both cases it approved of the dissolutions in question. Not surprisingly, this realpolitik decision found its critics – not only outside, but also inside the Court.

Not the answer you're looking for? Browse other questions tagged united-kingdom constitution canada comparative-politics .

8
Which countries have largely copied article 49 para 3 of the French constitution?
0
How does the possibility of snap elections provide an electoral benefit to voters?

4
What are Theresa May's views on LGBTQ+ rights?
6
What if the House of Commons votes no confidence in the Prime Minister?
1
Were three-line whips more (or less) common before the Fixed-term Parliaments Act?
9
To what extent do precedents in Westminster systems apply in other countries that use it?
5
The actual purview of Her Majesty The Queen's prerogative?
8
Is there any timeframe restriction for scheduling an early election under the Fixed-term Parliaments Act?
5
What are the procedural differences in calling a general election "notwithstanding the FTPA"?
8
Is there any reason why the Speaker could not be appointed as "caretaker" Prime Minister?
2
Can a Prime Minister be appointed if they do not have a seat in the Parliament?
9
What do the despatch boxes in the British House of Commons contain?