What is the difference between war refugees and deserters?

To give one example, the US government reserves the right to reinstate conscription at any time. If conscription is reinstated, anyone fleeing the US territory to escape the war will become a deserter and would face prison if they ever return. However at the same time the US routinely accepts asylum seekers from various war-torn regions around the world, even if those asylees are able-bodied young men who would otherwise be conscripted into the national army.

So what is the difference between being an asylum seeker and being a deserter? Is it generally accepted that citizens have the right to escape any war by running away to a foreign country? Do any governments somehow acknowledge this conundrum in their conscription laws?

To clarify, I'm only asking about refugees who escape war itself, rather than for reasons such as religious or ethnic persecution. See this related question for one example.

The difference is where you are. There is no contradiction.

The same is true for many other reasons people flee governments. E.g. if you say things the ruler dislikes, you are a "subversive dissident" to that country, and would be imprisoned if you return. So you don't return, but seek asylum somewhere else.

Draft Evasion is not the same as a Criminal act of Desertion from a legal standpoint. Draft Evasion is a method of avoiding conscription prior to being brought into the military, whereas Desertion is when someone who is already in the military leaves his/her post with intent to not return.

This is important as, during the Vietnam war, Canada was under no obligation to extradite draft evasion suspects as there was no equivelent crime in Canada, but the fate of Desertion Suspects was hotly debated because Canada does have laws against desertion and the members of the Canadian Military were very vocal about the government not returning suspects of Desertion. Ultimately Canada officially would prosecute deserters but in reality they left them alone for the most part. More recently, Canada determined that a deserter who deserted over what he felt were unlawful orders did not qualify for refugee status and returned him to the US.

War Refugees are commonly thought to be civillian individuals who are displaced as a result of the war (i.e. The Battlefield is their backyard).

It's important to note that accepting someone's claim to refugee status is the host country's determination, not the person seeking entry. Additionally, in the US, Desertion is a capitol offense if commited during time of war, while draft evasion does not carry such a possible punishment.

UNHCR has issued a position on this; it was actually one of their first doctrinal positions they issued, when they started doing so in the 1990s.

As it relates to conscientious objection to military service, the UNHCR position is further elaborated in the Amicus Curiae Brief submitted by the Office in late 1988 to the United States Court of Appeals for the Ninth Circuit in the case of Canas-Segovia.

The position can be summarized in the following terms:

b) There are cases where the necessity to perform military service may be the sole ground for a claim to refugee status, i.e. when a person can show that the performance of military service would have required his participation in military action contrary to his genuine political, religious or moral convictions, or to valid reasons of conscience;

c) Not every conviction, genuine though it may be, will constitute a sufficient reason for claiming refugee status after draft-evasion. Where however the type of military action, with which an individual does not wish to be associated, is condemned by the international community as contray to basic rules of human conduct, punishment for draft-evasion could, in the light of all other requirements of the definition, in itself be regarded as persecution:

d) A person whose refusal to perform military service is based on genuine religious, moral or political convictions can also be considered a refugee, provided that the genuineness of such convictions and the likelihood of prosecution and sanction, or other treatment amounting to persecution, are established.

e) Assuming that the religious, moral or political conviction advanced is reasonably credible, and surrounding circumstances of the case do not argue otherwise, a draft evador of that description may be accorded refugee status even though the punishment he faces does not differ substantially from that meted out generally for this offence because of simple disinclination to serve.

And this part seems to relate to the concrete case:

According to information reproduced in the international media, the persons concerned refuse to serve in the national army because they belong to a nationality group claiming independence for the territory from which they originate, because they view the national army as occupying "their" country and because they fear it may be used to suppress human rights and fundamental freedoms there. As they do not want to participate in such activities, they evade the draft.

In view of the preceding, it may be argued that such persons have a prima facie valid claim to refugee status under the 1951 Convention. Should such persons seek asylum in neighbouring countries, they should be protected from refoulement while their status is being determined.

Basically, the UNHCR view was that it depends on whether the applicant can convince he is evading the draft for one of the reasons protected in the 1951 Convention. Additionally, the likelihood of the drafting army to do "nasty stuff" (like human rights violations) was considered as an obvious enhancer of the claims of the evaders to have valid reasons of conscience (Convention-wise).

So what is the difference between being an asylum seeker and being a deserter?

A straightforward answer is that a deserter* can claim asylum, but being a deserter is not enough to claim it successfully. Not every deserter is eligible for asylum and not every asylee is a deserter†. 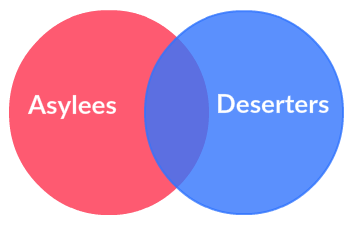 But, as far as I can tell, you're most concerned about the refugees escaping war-torn regions, where the lines become blurred. To address this properly I'll consider two different scenarios:

The actual requirements depend on the country, but usually, to claim asylum, asylum seekers need to present evidence that they face persecution for social or political reasons in their country of origin. Just being on the run from law enforcement is usually not enough. Some countries might recognize mandatory conscription as persecution, but most won't.

In the US, for example, asylum seekers need to fill form I-589 Application for Asylum and for Withholding of Removal. The definition of asylum is given in the instructions:

As you can see, "dodging the draft" and "being on the run from law enforcement" are not listed as valid reasons to claim asylum. If the host country has laws similar to the US, American deserters in your scenario are unlikely to be granted asylum unless the host country decides to accept them anyway for political reasons (e.g. North Korea).

Moreover, the host country is likely to run a background check on asylum seekers in cooperation with the US government. Being wanted in the US for crimes, including desertion, can be a good enough reason to deny asylum and to deport an individual back to the US.

Another issue is that the US government will likely try to stop deserters from escaping the US territory. This will force them to cross the border illegally. If the host country has laws similar to the US they can be prosecuted for illegal crossing and subsequently denied an asylum.

If the US is losing the war and/or otherwise becoming unstable, deserters might claim that they are no longer able to protect the US and at the same time fear the persecution from invading enemy/winning side of civil war. This way they will fit the definition of a refugee according to 1967 Protocol:

The success of their claim largely depends on the US being recognized at an international level. If at this point the host country still recognizes the US government it might choose to deny their refugee status and return them back to fight for their country.

Some other things to consider:

So, yes, people can apply for asylum if they think that the US or their interpretation of the US no longer exists. Something like this has already happened before, see Confederados.

To answer your other questions.

Is it generally accepted that citizens have the right to escape any war by running away to a foreign country?

Do any governments somehow acknowledge this conundrum in their conscription laws?

As far as I can see, there's no conundrum. Other countries are unlikely to grant refugee status frivolously.

In general if your country:

* — As others already noted draft evasion is a separate crime, for the purposes of this answer I'll assume that we're talking about actual deserters. It doesn't change much.
† — This statement is so general it will work for any other pair of largely orthogonal concepts. You can replace "asylee" with "vegan" and "deserter" with "jaywalker" and it will still work.

Not the answer you're looking for? Browse other questions tagged political-theory armed-conflict refugees asylum conscription .

7
Why do we call the Syrian refugees refugees?
4
Has the US government adopted the extended UNHCR definition of refugee?