Why must Chinese maps be obfuscated?

According to this answer on Travel.SE, the Chinese National Bureau of Surveying and Mapping requires that published maps of China must include a certain deviation between the map and the real world.

In the comments, the answerer says that although the statute doesn't provide a reason, it is commonly believed to be for national security.

Have any Chinese officials or official documents provided a reason why maps must include this deviation?

Just to clarify, this isn't at all like the GPS Selective Availability case where bits were unavailable unless you knew the key. The Chinese don't have their own GPS satellites (duh) setting these coordinates. What this GCJ-02 business is is a non-disclosed, but not-so-hard-to-reverse engineer conversion algorithm from other coordinates. The big picture looks like this: 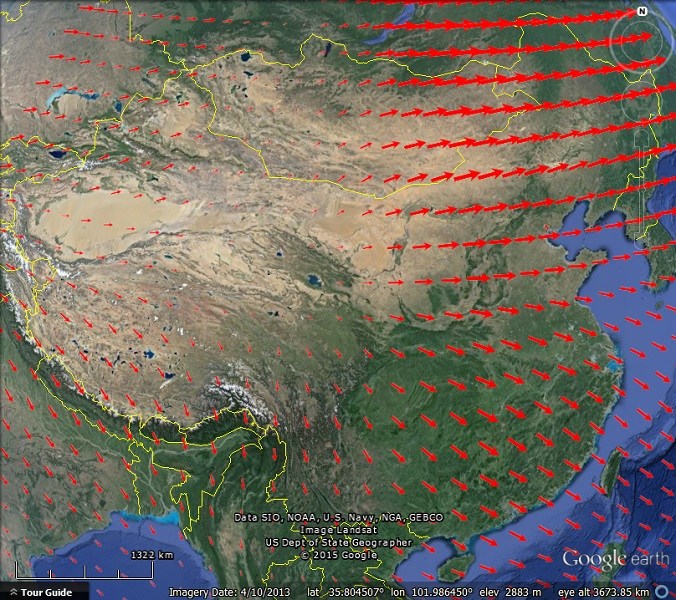 That's the reverse-engineered conversion from the "bog standard" WGS-84, displayed as a vector field. As the blog from which I too that image says, the offsets are basically constant locally, but they vary across China.

On Google something funny happens even when you’re viewing in the US: the Chinese border crossing plaza (on the north side) doesn’t line up with the Macau crossing (on the south side). This is due to a law where companies are forbidden to map China accurately, OpenStreetMap’s ability to avoid that law, and the independence of Macau and also Hong Kong (which has the same discrepancy).

As for the reason, according to one Chinese developer in a post from April 2015:

Before the WGS-84 <--> GCJ-02 transform algorithm leaked and made available everywhere on the Internet (eg. this repo), some people tried to get a lot of samples of WGS-GCJ point pairs and sold the dataset to people in need. But this kind of dataset is no longer useful because we now have the algorithm itself.

Are all these in the Chinese law? No. They are mostly in some vague administrative orders or industry regulations made by the government. There is a Code of Geological Survey (http://www.gov.cn/ziliao/flfg/2005-08/05/content_20947.htm, Chinese), though. But it only says data obtained through survey is classified by default (Article 29) and companies without a permission cannot do survey (Chapter 5). Nothing about GCJ-02 is made officially public.

Why does the Chinese government do this? National security, they say. But people developing LBS apps tends to believe that it is because of money. The government charges Chinese companies for the "shift correction" feature. We need to make a reservation with the government and take the source code of our app to the bureau to get the feature compiled with our code.

Since then Xinhua reported new regulations on maps being passed at the end of 2015, and taking effect in 2016. Amazingly these are available in English, but they say nothing about using some specific coordinates; so the ambiguity noted in that Chinese dev comment basically continues. The new regulations do say that maps must be submitted for government review, except in some very limited circumstances.

For on-line maps there's this verbiage in the new regs (which doesn't clarify much):

Article 33. To provide the public with services such as geospatial positioning, geoinformation uploading and labeling, and map database development, a provider of Internet map services shall obtain the necessary qualification certificate for surveying and mapping in accordance with law.

To engage in Internet map publishing, a provider of Internet map services shall be subject to review by and approval of the competent publication administration department of the State Council in accordance with law.

Article 34. A provider of Internet map services shall place its map data servers within the territory of the People’s Republic of China, and shall establish the management system and introduce safeguard measures for the security of Internet map data.

Article 38 A provider of Internet map services shall use maps that have been reviewed and approved in accordance with law, and strictly verify newly added content of the Internet maps, and it shall, in accordance with the relevant provisions of the State, file such content with the competent administration department of the State Council for surveying, mapping and geoinformation or the competent administration department for surveying, mapping and geoinformation of the province, autonomous region, or municipality directly under the Central Government.

Basically it seems to be a system of: give us your maps and will give them back to you as we think they should be published... which at some point probably involves the coordinate system, but it's not mentioned explicitly in these regs. There are some up to 100,000 yuan fines for not following these regulations.

Also according to a Chinese page, GCJ-02 (although developed by the State Bureau of Surveying and Mapping) is not the same as the official Chinese CGCS2000 system, for which a lot public info is available.

So it's hard to answer a "why" for something that's hard to even find an official record that it needs to happen...

Unless the Chinese decide to change that (leaked code) and ban all prior maps, this doesn't compare to the SAASM, which supposedly changed keys (on the satellites and receivers) once in a while. SAASM even allows rekeying over insecure channels, while the older PPS-SM required a secure channel (e.g. taking the GPS device to an authorized/secure location for rekeying.)

I suppose I should mention that the Chinese are building their own GPS alternative, the BDS (BeiDou Navigation Satellite System), which apparently became operational in December last year, but that's a different story. And BDS broadcasts its location info in the aforementioned CGC[S]2000.

Finally, Baidu "Total View" has a Street View equivalent with altered photos ... like [badly] disappeared buildings etc. You'd probably be hard pressed to find an official explanation for this either. That article contains some speculation about the reasons, but that's about it.

What the Law Says

After reading that statute, it turns out that it does not explicitly require that maps be obfuscated.

However, the law does require the usage of an official datum. A datum is basically the mathematical model which describes the shape of the earth (see this question on GIS.SE for more detail). According to wikipedia, the agency responsible for implementing this model has created the GCJ-02 datum, which has a random disturbance - effectively slightly randomizing the location of objects on the map.

There are many unsourced claims online which say that this random disturbance is for security reasons. Although I couldn't locate an original source making this claim, there is precedent for it. The U.S. previously required another technology which also altered location data for defense purposes.

Prior to 2000, the United States Department of Defense required the usage of 'Selective Availability' (SA). SA was a technology built into the GPS system which introduced random errors. GPS.gov, the official U.S. source of information about GPS, describes it as:

Selective Availability (SA) is the deliberate introduction of error to the precise timekeeping of the GPS satellites, thereby reducing both positioning and timing accuracy for civilian users. It was designed to provide U.S. and Allied military forces with a navigational advantage in times of crisis or conflict. (source: GPS.gov)