Why did Rep. Omar conclude her criticism of US troops with the phrase “NotTodaySatan”? [closed]

Putting aside whether or not Omar was truthful when she tweeted:

...the thousands of Somalis killed by the American forces that day

(in reference to the October 1993 Battle of Mogadishu)

Why did she conclude her criticism of US troops with the hashtag "#NotTodaySatan"?

"Not Today Satan" is a common phrase used by religious people that means "I'm not going to brought down today". While there is clearly an effort to make it out as if Rep. Omar is saying that America is Satan, that is clearly not what this phrase means.

If you look for other tweets that use that hashtag, once you scroll down past the manufactured right-wing outrage, you'll see tweets like:

When life isn't the way you hoped, you change it and make it what you need. Work is hard, but providing for myself and my husband is more important than the trivial bitches. #nottodaysatan pic.twitter.com/3i39KznNIW

when I was 14 they predicted a valve replacement at 30. Today was my annual check up, and a bitch gets to keep her valve! What’s good heart disease!? #nottodaysatan

Already know some type of blessing is on the way when the energy vampire ex pops up. Demons can smell happiness. #Nottodaysatan 🙅🏽‍♀️

No Anti-American sentiment there!

Some more evidence that this is not some sort of secret terrorist hashtag:

As for why she might have said that, the tweet you linked to is a direct reply to another tweet by @j_w_84 which I've reproduced below: 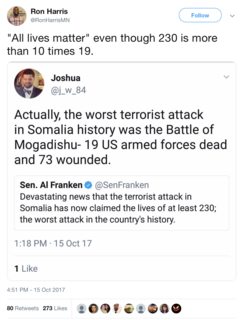 In that tweet, Joshua claims that the that the worst terrorist attack in Somalia was the Battle of Mogadishu where 19 Americans were killed, not the then recent terrorist attack (referenced in the original tweet by Al Franken) where 230 Somalis were killed. The only way that makes sense is if you completely devalue the lives of Somalis, both those killed in the recent terrorist attack (to say that 19 dead is worse than 230 dead) and those killed in the fighting in Mogadishu (U.S. special representative to Somalia Robert B. Oakley estimated that there were 1500-2000 civilian casualties due to the reality of fighting a pitched battle in a crowded city).

It's this casually racist attitude from Joshua, which holds that only American lives matter, that Rep. Omar is referring to: just like heart disease, boring work, or Avengers spoilers, the racist attitudes of some will not bring her down and stop the important work of fighting against it.

Probably as a humorous way of saying "you're not going to get one past me."

This seems to be a recent but widespread phrase. We can see many humorous books with this phrase in their title.

The original use was seemingly literal, mainly coming from Christians metaphorically telling Satan that he wouldn't win.

When the computers act up I speak "In the name of Jesus not today Satan.

My Book is My Story: Surrendering My Journey to the Holy Spirit (2013)

When I sense him using my rough day to steal my joy, he's crossing a line and I tell him "Not today, Satan." I even have T-shirt that says it in big, white, block letters.

The Year of Living Happy: Finding Contentment and Connection in a Crazy World (2018)

However, it seems to have mutated due to overuse (e.g., people would say "Not today, Satan" when their computers acted up or they were having a bad day). While the original phrase referenced actually catching Satan trying to ruin one's life and refusing to allow this, the broad version seems to refer to catching anyone in the act and refusing to allow them to go forward, particularly in relation to not letting someone ruin one's day.

Not the answer you're looking for? Browse other questions tagged united-states somalia .

2
Why is the phrase “civil rights” used with such a narrow meaning in the USA?
3
How did House Resolution 367 pass on the same day as introduced without a 2/3 majority?
6
Why did Senator Rand Paul speak for ten hours on 20th May 2015 and why did he stop before midnight?
6
Why did Obama commute Chelsea Manning's sentence?
26
Why wasn't Elena Kagan's lack of *judicial* experience an issue?
0
When did the phrase “the law of the land” take on its current meaning with regard to the US Constitution?
83
Why is Elizabeth Warren's Native American ancestry a political issue?
6
Criticism of Trump's drawdown of forces in Afghanistan, what would be the alternatives?
25
Did any of the founding fathers anticipate Lysander Spooner's criticism of the constitution?
7
Why is the Federal Government competing for medical supplies with the US States hit hardest by the COVID-19 Pandemic?