Why does India say that Kashmir is its integral part 'atoot ang' but then refuse to talk about Kashmir on an international level?

India has claimed that Kashmir is its integral part but then refuses to discuss it in international forums (the latest 'Kashmir is an internal issue' by Sushma Maharaj at the OIC). If Kashmir is India's integral part how come India allows Pakistan to retain the POK (Pakistan occupied Kashmir) and not create more of a ruckus?

From 2002, I have seen various international players expressing their interests in getting involved in resolving the Kashmir dispute.

I hope you are able to see a pattern here which is India rejecting mediation offers every single time when someone steps in.

But, can you guess why?

Well, the answer is, India has nothing to gain from the mediation, only has a lot to lose. The mediation will result in India giving some kind concession to Pakistan in terms of either land-sharing or something more serious like holding a plebiscite in the area. That is why India is much scared about mediation.

India's prevailing strategy seems to be keeping Pakistan financially weak by spreading propaganda so that they can't get foreign investments (especially from the West) and thereby can't become an important economic player and to able to spend more in the area of defense. In the meantime, India can bring some demographic modification in Kashmir so that Kashmiris can't continue their protest/struggle: 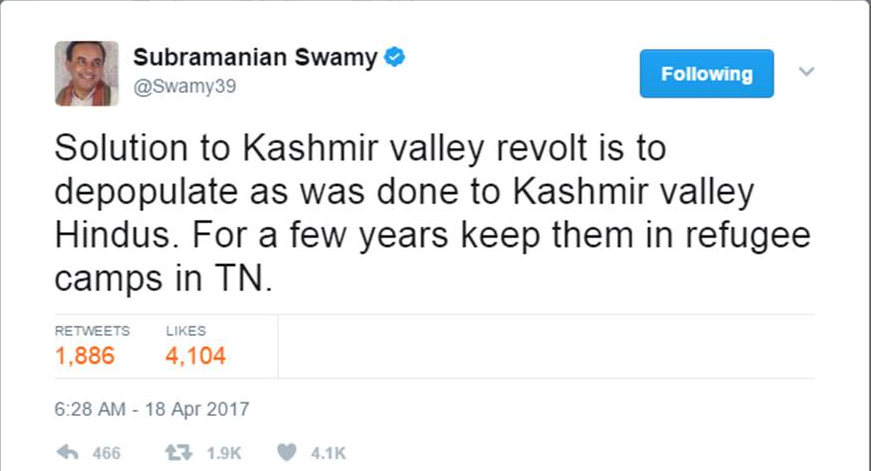 The de facto border carved in 1949 worked to India’s territorial and political advantage.

The [1949] ceasefire line left the Indians with the bulk of Jammu and Kashmir’s territory (139,000 of 223,000 square kilometres, approximately 63 per cent) and population. The Indians had gained the prize piece of real estate, the Kashmir Valley, and they also controlled most of the Jammu and Ladakh regions. These areas became Indian Jammu and Kashmir (IJK). The Pakistanis were left with a long strip of land running on a north–south axis in western J & K, mostly Jammu districts bordering Pakistani Punjab and the NWFP . . . a slice of Ladakh (Skardu), and the remote mountain zones of Gilgit and Baltistan (the Northern Areas or NA). (Bose 2003: 41)

And claiming the rest is probably undesirable anyway...

Despite the bombastic statements and blustering of the governments of both India and Pakistan, however, the Indian government has all along perceived the inclusion of Pakistani-administered Jammu and Kashmir and the NA into India as unfeasible. Likewise, the government of Pakistan has all along either implicitly or explicitly acknowledged the impracticality of including the predominantly Buddhist Ladakh and predominantly Hindu Jammu as part of Pakistan. The coveted area that continues to generate irreconcilable differences between the two governments is the Valley of Kashmir.

Those are quotes from an article by Nyla Ali Khan .

That's in line with the fact that during the Dixon mediation India wanted a partition or a region-by-region plebiscite (likely resulting in the same), while Pakistan insisted on a plebiscite on the whole area, or a partition on religious lines.

According to the Indian commentator Raghavan, it was first Nehru who proposed a partition-cum-plebiscite plan: Jammu and Ladakh would go to India, Azad Kashmir and Northern Areas to Pakistan, and a plebiscite would be held in the Kashmir Valley. Dixon favoured the plan, which bears his name till this day. Dixon agreed that people in Jammu and Ladakh were clearly in favour of India; equally clearly, those in Azad Kashmir and the Northern Areas wanted to be part of Pakistan. This left the Kashmir Valley and 'perhaps some adjacent country' around Muzaffarabad in uncertain political terrain. However, according to Dixon, Pakistan "bluntly rejected" the proposal. It believed that the plebiscite should be held in the entire state or the state should be partitioned along religious lines [Which would have given the Valley to Pakistan].

This was basically the Indo-Pakistani version of a gerrymandering dispute.

After the failure of the UN mediation(s) came the 1972 Simla Accord in which India and Pakistan agreed to solve Jammu and Kashmir problem bilaterally, without involving anyone else.

Both governments agree that their respective heads will meet again at a mutually convenient time in the future and that in the meanwhile the representatives of the two sides will meet to discuss further the modalities and arrangements for the establishment of durable peace and normalization of relations, including the questions of repatriation of prisoners of war and civilian internees, a final settlement of Jammu and Kashmir and the resumption of diplomatic relations.

So not only is India actually pretty happy with how the Jammu and Kashmir is partitioned (despite the continued official rhetoric to the contrary), but they also gave up on involving anyone else in the resolution, and the latter in agreement with Pakistan.

Not the answer you're looking for? Browse other questions tagged india pakistan kashmir .

4
Why does India not want any International intervention in the Kashmir Issue?

5
What is the origin of the Durand Line, and what is the liklihood that it will persist over time?
2
How is the China–Pakistan Economic Corridor possible?
12
Why does India want Kashmir so much?
6
Why is China investing in Pakistan, considering the security considerations and corruption?
4
Pakistan Occupied Kashmir
41
Why is there no willingness in the international community to step in between Pakistan and India?