Are there any systems (in other countries) comparable to the overt dualism of Puntofijismo?

Apparently, before Chavez came to power, Venezuela had a power-sharing system in which two parties agreed to share the spoils by alternating in power:

Venezuela, unlike most other Latin American countries, had an unbroken line of democratically elected governments from 1958 and onwards. On January 23, 1958, the head of the last Venezuelan military government, Marcos Pérez Jiménez fled the country. The following year, the government of Romulo Betancourt from the Social Democratic party Acción Democrática entered government offices, backed by a power-sharing pact with the other dominant party, the Christian Democratic Party COPEI. The pact, called the Pact of Punto Fijo, committed both parties to cooperate and share political spoils whilst alternating in government offices. Consequently, Acción Democrática and COPEI moved in and out of the presidential office for 40 years until Hugo Chávez won the presidential elections in 1998.

If this is a reasonably accurate description of the Venezuelan political system before Chavez, are there any similar examples from other countries of overt, long-term alternation pacts like "Puntofijismo"? (Yes, I'm aware some discuss/consider a two-party system as equivalent, but I'm asking about overt "collusion".)

parties form-of-government comparative-politics
Share
Improve this question
asked May 2 '19 at 11:05

There is a paragraph about similar pacts in its wikipedia page:

It bore a resemblance to the turno pacifico of the restored Spanish monarchy between 1876 and 1923, in which Conservative and Liberal Parties alternated in power.

The Miami Pact signed in Cuba in 1957 is also similar to that of Puntofijo. It was also a political agreement between parties that was designed to confront dictatorship (Batista's regime), uphold democracy, as well as invite political participation.[14] Though ultimately the Miami Pact failed to fulfill its duties as a democratic deepener due to struggles in the alliance between the signers. The National Front (Colombia) was another contemporary agreement.

But you probably had already noticed that information and are actually looking for contemporary case-studies. I would argue that that kind of collusion happens in China (quite forced but it exists):

In practice, only one political party holds effective power at the national level, namely the CPC. Its dominance is such that China is effectively a one-party state. Eight minor parties are part of the United Front and also take part in the political system, but they have limited power on a national level and are almost completely subservient to the CPC as they must accept the "leading role" of the CPC as a condition of their continued existence.

And perhaps more similarly in Russia:

In Russian politics, a "party of power" is a specially established party which unconditionally supports the current president or prime minister in the parliament.

To find more (possible) examples of this I would recommend the reports from Afro Barometer which puts into perspective how opposition parties are seen in many African nations: 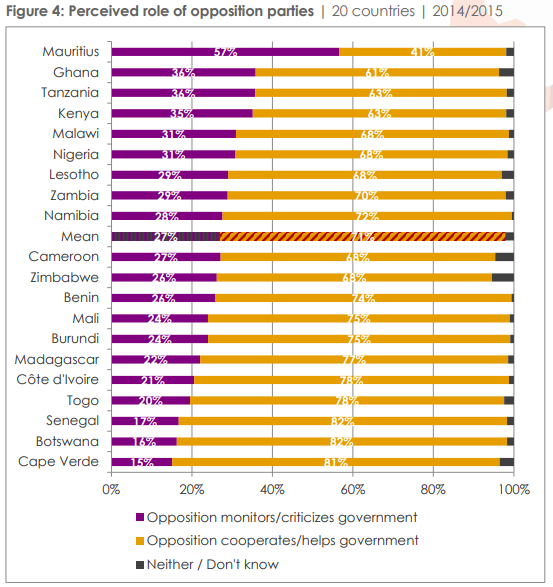 Finally I would put in evidence the paper The Logic of Party Collusion in a Democracy: Evidence from Mali (Gottlieb, 2015), which provides context to the case-study of Mali:

Exploiting the fact that Mali's decentralization produces within-country variation in both electoral and governance outcomes, the author uses data from commune council elections alongside local-level public goods provision as a measure of rent seeking. Poorer public goods provision is indeed more likely when all political parties in a district win seats on the council. To show that collusion is the mechanism driving this relationship, the author tests several observable implications in the data and uses qualitative evidence as illustration. This examination of when it is in the strategic interest of parties to engage in uncompetitive behavior contributes to the literature on when elections fail to produce democratic accountability.

I don't think any of these examples were arranged formally, like the Puntofijo Pact but they might serve as comparison depending on what you are trying to achieve.

Not the answer you're looking for? Browse other questions tagged parties form-of-government comparative-politics .

31
Why don't Democrats and Republicans collude?

9
Do any countries other than Azerbaijan have education requirements for a national elected office?
4
Are there any variants of capitalism that treat states themselves like some form of corporation?
6
Are there any studies of comparative biases in adversarial and inquisitorial legal systems?
2
Are there standardized definitions for systems of government?
13
Do any other countries aside from the UK have a tradition of ‘joke’ candidates?
3
Is there any country other than Austria with a conservative-Green government?
2
Has there been a comparison of party discipline in the UK with other European countries?
0
Are there other EU countries besides Romania and Hungary where the ECR and ID did not gain any seats in the last EU elections?
2
Is there a meaningful metric for how quickly different countries advance their legal systems?