Where are the "shires" in the UK?

...the Conservatives could lose about 500 seats to the Lib Dems and 300 to Labour. The latter traditionally makes fewer gains in the shires, where many of the elections are being held.

I've never before heard the expression "the shires". What does this refer to? Is it strictly a geographic reference or does it have a more subtle political or demographic meaning?

This was referring to local council elections affecting English and Northern Irish councils.

united-kingdom terminology
Share
Improve this question
asked May 2 '19 at 16:28

This is actually a surprisingly complicated question to answer, or at least to give specifics for. Briefly, a "shire" is a unit of land division, very similar to "county", the first being Anglo-Saxon, the second Norman. As such, many modern British ceremonial/historic counties have the form city name + shire, for example Nottinghamshire. In 1888 local government in England and Wales was restructured to create administrative counties, many of which retained the relevant ceremonial name. Further reform eventually culminated in division into metropolitan (urban) and non-metropolitan(rural) counties/districts with the rural ones sometimes named after ceremonial counties and the urban ones after towns or cities (this has since been further modified.

As such "shires" here is being used as a short hand for non-metropolitan districts. More specifically, this will be more accurate for rural counties in the south and middle of England, where the Labour Party finds less support, although confusingly, many of these don't actually have names ending in '-shire'. Thus the meaning is party geographic, but mostly demographic.

Original (incorrect) answer: If I am not mistaking, the shires in this case are not as convoluted in nature as origimbo's otherwise excellent (and correct) answer might suggest, and simply refer to the dictionary definition: 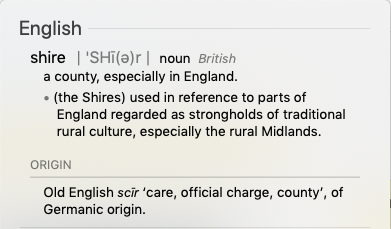 In the context that The Guardian is using it, the shires are areas whose names end in -shire. For example Wiltshire and Hampshire.

Traditionally most of those areas have been politically conservative and where the Tory party has a strong base. They tend to be more rural. However, the recent failure to deliver Brexit has damaged the Tory party and they seem to be losing support in their traditional heartlands.

So "the shires" is just a shorthand way of addressing that poorly defined collection of traditionally Tory leaning areas, rather than referring to specific geographical locations.

Not the answer you're looking for? Browse other questions tagged united-kingdom terminology .

8
What is the political system where there is a 'friendly' dictatorship
3
What are the meanings of "Kangaroo", "Guillotine", and "Fox" in the UK House of Commons?
1
Is there a name for a system where representatives are not party affiliated, but issue affiliated?
17
Where have Brexit voters gone?
4
In Westminster systems that are not Australian is the term “Dorothy Dixer” known?
3
Is there a term for politicians enacting a policy where the negative consequences will be far after their political career is over?
0
What are the main "Revisionist powers" and "satisfied power" in the world now?
6
When and from where was the PAC first legally defined