Is Juan Guaidó popular in Venezuela?

To me Nicolás Maduro seems to be a very poor leader.

However, there's a lot of opposition to US intervention in Venezuela from groups like Code Pink,, Embassy Civilian Protection Collective, The Grayzone, etc. I have a lot of respect for Code Pink but cannot understand why they are supporting Maduro or why their message is so contrary to the mainstream media.

Does anyone know if the people of Venezuela support Maduro or Guaido?

democracy venezuela
Share
Improve this question
edited May 8 '19 at 0:20

First, we need to establish an important distinction. Juan Guaido's popularity and Maduro's popularity do not sum to 100%. It's possible for Maduro to be highly unpopular (as he is; see below) and for Guaido to be equally unpopular (he isn't, but it's theoretically possible). It would even be possible for some people to like both Maduro and Guaido, though a bit unlikely.

That said, various polls show levels of support for Guaido above 50%:

Overall, these results suggest that Guaido is popular. While the exact numerical definition of popularity is subjective, the majority of the polls suggest a popularity well over 50%, while the lowest suggests the approval of a third of the population, as of early February.

We need to keep some important caveats in mind when analyzing this data. Historically, Maduro's approval rating has been somewhat higher among less wealthy Venezuelans. As such, polls by telephone may overestimate Guaido's support by not getting data from Venezuelans who don't have phones, who are disproportionately likely to be poorer. Further, the form in which a survey question is asked can change the results: asking whether someone approves of Guaido is not the same as asking whether he should immediately be sworn in as interim president. Certain questions may also conflate support for Maduro and opposition to Guaido, such as the Hercon poll that grouped them together explicitly.

Finally, these results are likely to be highly time-sensitive: just as Maduro's failure to fix Venezuela's economic crisis has lowered his approval rating, if Guaido fails to do what he has promised (e.g. remove Maduro from the presidency) his approval rating might similarly plummet even without a corresponding rise in Maduro's approval. This is illustrated by the second Meganalisis poll mentioned previously.

Aside from polls, we could also look at the high turnout for Guaido's rallies and protests, such as this January 23 protest in Caracas: 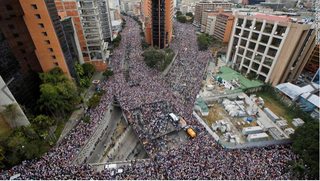 Of course, this doesn't prove that he's more popular than Maduro (for that, I'd look to the polling data), given that the latter also has some large rallies, such as this one on January 30 (credit to this answer) 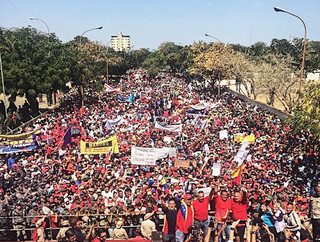 It's very hard to compare the size of the rallies directly, but I think it's safe to say that the fact that Guaido was able to draw a large crowd suggests strong popularity at that point in time.

You may surf the internet a bit and obtain photofacts of Maduro's wide support: https://pbs.twimg.com/media/D5dhYuNWkAATWk2.jpg:large https://colonelcassad.livejournal.com/4747367.html

So, "dictator without people's support" is just a myth. But does no one in Venezuela supports Guaido? It won't be fair to say "yes". Guaido's supporters are concentrated in rich districts of Caracas. They are what you call "upper middle class". Parts of the old, before-Chavez Venezuela, from the times of a banana republic. That was logical - according to the Monroe doctrine, which is what Bolton now tries to revive.

That is important - without understanding what is the Monroe doctrine, it's impossible to understand why controlling Venezuela is so important for the US. As you remember, the doctrine claims the whole of South America as the US's (and only the US's) exceptional influence area. You can dive into late 19 - early 20 century history - time of full power of that doctrine - to understand term of a "banana republic". Or just open O'Henry's stories - "Cabbages and Kings" will give you such understanding. In fact, in those times there were no independent countries - just territories for US business.

Another point to low Guaido's support is a lack of support from the army. Venezuelan elites are now under very high pressure - just read John Bolton's twitter feed a bit. Do you see those endless claims to army to betray Maduro? Do you now why John Bolton has to persuade them himself? Because Guaido is in terribly in need of any army supporters.

Just imagine - the US, one of today's superpowers, cannot change regime in a country near its borders. Remembering regime changes during the Arabian spring, the regime changes in Ukraine and Georgia, and attempts to change the regime in Syria, we cannot say, that US has low skills or low resources. Doesn't this describe Guaido's level of support? Even Guaido himself accepts it, in some strange manner, but he does.

Also, if you already opened John Bolton's twitter, you may notice, that from some point, phrases about 'democracy' disappeared, John starts to be direct in his claims - "Russians should leave!". Without spells about "Venezuelian people" and "democracy", "elections" and so on. Just problems in US zone of influence controlling. Did you hear about Guaido before all this? No. He was just dropped out of the box, claimed as "Popular leader" and supported. No matter that there are OTHER opposition leaders - that's really so. But US chose Guaido. Why? Don't know, really. Maybe he is more guided. Don't know.

And about economics. Many claims about "Venezuela's economics is failing". That is true. And now there are US sanctions on it. But do you know how much time are sanctions in action? Let's see: Oh, my god, sanctions are in action for a very long time - from 2014! Sanctions also affects even medical supplies. Strange, that US press blames Maduro about medical supplies shortages - they should know, that the US itself stopped selling them, shouldn't they?

It seems doubtful that a non-Venezuelan, (like me, or presumably most of us here on Politics.SE), could adequately answer this topical and localized question. But foreigners can at least know their own principles and favor from afar whichever parties seem more in accord with those. Which brings up a related issue:

... I have a lot of respect for Code Pink but cannot understand why they are supporting Maduro or why their message is so contrary to the mainstream media.

The nature of the controversy has several facets:

Not the answer you're looking for? Browse other questions tagged democracy venezuela .